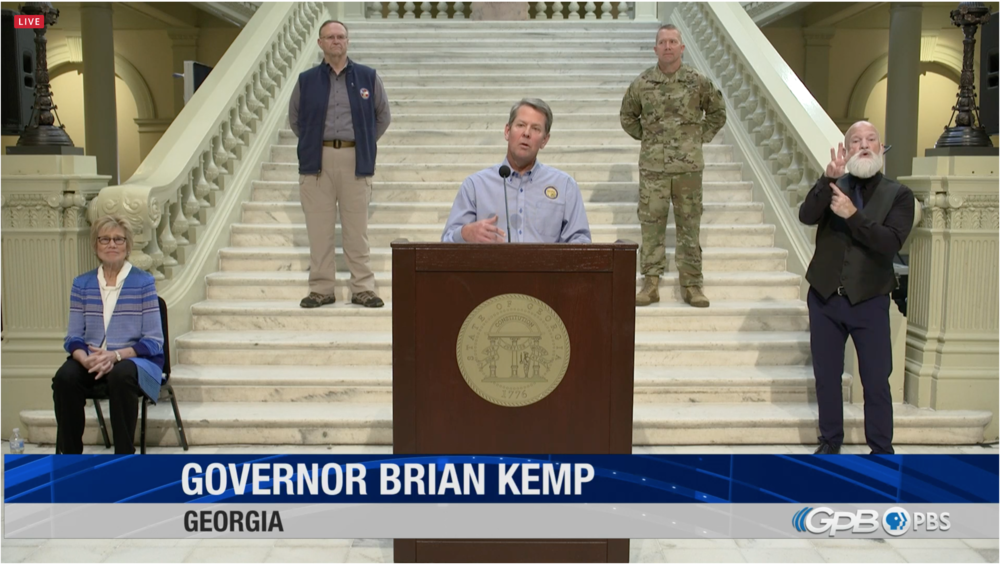 Gov. Brian Kemp delivers an update on coronavirus in Georgia.

While Georgia has expanded capacity, criteria and availability of COVID-19 testing across the state, not enough people are actually going to get tested, state officials say.

At a Monday press conference, Gov. Brian Kemp said the state has worked with public and private partners to ramp up testing to several thousand specimens processed a day.

The governor asked people with symptoms to download a free app from Augusta University Health to set up a telehealth screening with a physician that could lead to a referral for a COVID-19 test.

According to the Centers for Disease Control and Prevention, symptoms include fever, cough, shortness of breath, chills, muscle pain, headache, sore throat and loss of taste or smell.

Also in the last week, local health departments collected more than 12,000 tests and have nearly 50 test sites across the state.

Kemp said Georgia has now moved from 42nd in the country for per-capita testing up to 36, and has completed nearly 128,000 tests in a population of around 10 million.

The Georgia Department of Public Health updated its dashboard to include more charts and graphs about the coronavirus’ spread, including the infection rate per 100,000 residents, average case and death rate. Most information on the dashboard will be updated hourly.

But even with the expanded information, Kemp and other top officials say people need to actually take the steps to get tested.

Georgia National Guard Adjutant General Tom Carden said there was “plenty of unleveraged capacity” at testing sites he visited, including a site in Dawsonville that only tested 20 people and 17 tests performed during a four-hour window at Georgia State University’s stadium in Atlanta.

The Georgia Guard’s testing capacity is over 1,000 samples a day.

DPH Commissioner Dr. Kathleen Toomey said Georgians probably don’t know that the state has expanded the criteria for who can be tested.

“I think that word has not gotten out that we have expanded criteria much more broadly as well as [for] asymptomatic healthcare workers, first responders and others who may be at risk,” she said. “We have additional test kits and have lab capacity.”

Toomey added that the state is hoping to do “thousands and thousands” of tests in the next two weeks, as Georgia’s stay-home order will expire Thursday and more businesses will open up under strict health and safety protocols.

Under an order signed last week, barbershops, nail salons, bowling alleys and gyms were some of the businesses that could reopen to “minimum basic operations” last Friday, and today restaurants could reopen in-person dining if they followed a 39-point list of precautions as well.

Kemp was excoriated in the national media last week for his decision, culminating in President Trump spending multiple days distancing himself from earlier support of the governor’s move and calls from Democratic lawmakers to reverse his decision.

When asked about the data that informed his reopening plan by an Atlanta-based national correspondent, Kemp snapped back at the reporter.

“It might be hard for NBC News to understand this, but all the data is publicly available on the public health department’s website,” he said. “As I’ve said before, I made those decisions in conjunction with Dr. Toomey and many, many other people following the data, and there’s a lot of data that we’re following.”

Toomey acknowledged that when the decision was made, Georgia did not (and still does not) meet the White House Coronavirus Task Force’s guidelines for states to ease their coronavirus restrictions.

“We didn't meet the full gating criteria, but we met several of them and we are approaching a plateauing [in cases] which made us feel that would be safe to move forward because we have three things in place,” she said. “We have adequate hospital capacity… adequate testing capacity… and we are ramping up our contact tracing capacity.”

The governor outlined Georgia’s medical capacity, noting that there are more than 1,000 critical care beds currently available, 1,800 ventilators available with 1,000 in use and dozens of additional hospital beds constructed for health care facilities across the state.

Download the AU Health Express app to connect with a medical provider and see if you are eligible to be referred for a COVID-19 test.