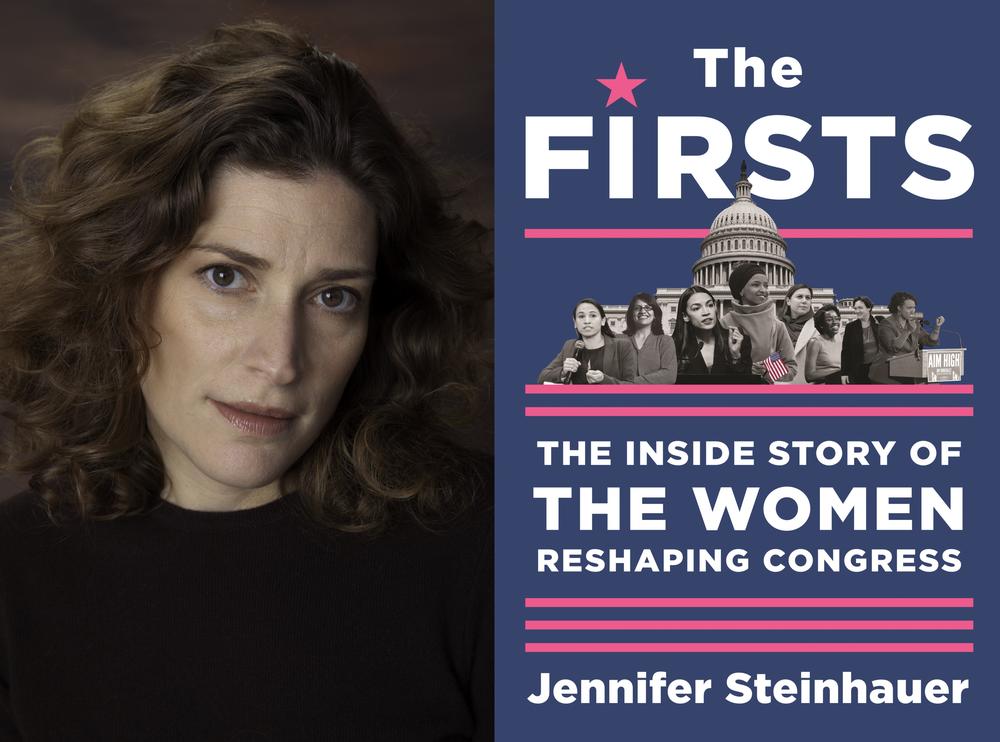 Journalist and author Jennifer Steinhauer joined Virginia Prescott for a new virtual author talks series presented by the Atlanta History Center. They discussed Steinhauer's new book, "The Firsts: The Inside Story of the Women Reshaping Congress."

“The Squad” gets a lot of media attention, but they are just one part of the record number of women elected to Congress in 2018.

Many won seats held by Democrat incumbents, while others flipped districts long held by Republicans — with bootstrap campaigns and social media muscle that defied campaign conventions.

Veteran Congressional reporter Jennifer Steinhauer was there as the 116th Congress was sworn in back in January 2016. Now, she gives a behind-the-scenes look at this remarkably diverse group of women, who are making their way from outsiders to legislators, in her new book. It’s called The Firsts: The Inside Story of the Women Reshaping Congress.

Last week, the Atlanta History Center launched a virtual author talk series, hosted by Virginia Prescott, and Steinhauer was the first author featured. We hear a portion of that digital event. You can also catch the full conversation here.

The virtual author talks, which are free events, resume on Sat., April 25 at 2 p.m. with Sue Monk Kidd. For a full schedule and Zoom links, visit the Atlanta History Center’s website.

On women impacting the workplace culture in Congress

I think that, for people in politics, generally — and specifically for women — it's so long been the case that you kind of can't be your authentic self. You know, you have your game face; you have your political persona, how you behave on a campaign trail. And I think that these women — what it was, is they just embraced who they were. Whether they were parents, you know, and they had to run off [...] from a meeting and call their kids. I know one member, Jahana Hayes, told me she will not take meetings at lunchtime because she does stuff with her kids at that time. And you speak of the headscarf that Ilhan Omar got an accommodation to wear, to break the hat rules. You still can't wear hats on the floor, but you can wear religious headgear. So, in recognition of the diversity and the female ways, if you will, I think it was just basically people speaking and saying, “We're bringing our whole selves to Congress, into the workplace. People elected us because they like those people. And we're not going to change them because we've gotten into this institution.”

In my personal view, the true Squad, if you want to use that, is actually a different group of women who beat Republicans. These women are veterans and national security background women. I think of Mikie Sherrill from New Jersey. You have Elaine Luria, who was in the Navy, from Virginia. Abigail Spanberger, who was a CIA operative. Also, she's from Central Virginia. Elissa Slotkin from Michigan. Chrissy Houlahan from Pennsylvania. They all had this national security background, veteran background, and they knew each other before the campaign, unlike the Squad. These women campaigned together. They got a lot of the same fundraising monies together and did events together. They have this group text. They're always kind of planning legislation together. [...] The Squad is not cohesive legislatively. They kind of go their own way, and it's a little overstated how much they actually hang together. That other group, they really, in my view, do.

I say this to kids a lot who are really on the left, who are very frustrated. And they laugh at me, but I mean it. I say: every single Democrat who was on that stage in the beginning — and I would include Joe Biden in this — pretty much are to the left of Barack Obama. And the idea everybody on the left wants Medicare for all, I get it. [...] Well, that was considered very far left when I first got to Washington. People lost their seats over that. So people kind of forget sometimes the party's policy objectives have moved quite a bit to the left, in many ways, over the last decade. But they're not necessarily where [Alexandria Ocasio-Cortez] is, as broadly as a party in our country.

On how members of Congress interact behind the scenes

There's a scene in my book where Nancy Pelosi is kind of getting mad at her caucus and saying, you know, “You gotta come together, you got to get it together here. You know, a lot of you people came here to make foie gras, and most days we're just making sausage.” I thought that was obviously a very apt analogy. Yeah, I believe in the legislative process. You know, that Congress is kind of, that’s the “yay” or “nay” spot of prescriptive policy in our country, in any direction. And that process comes together in a way that you don't see on cable, you don't see on Twitter, and you don't see in political ads — which is through not very sexy, not very exciting business of committee work and writing bills and having hearings and having discussions. And, you know, the dirty secret about Congress is most of these people get along pretty well, behind the scenes. They have to! They sit on committees together. [...] I see them in elevators together. Republicans make fun of  [Alexandria Ocasio-Cortez]. Boy, they'll chase her down a hallway to say hello to her. They’re fascinated with her. I mean, a little less so now that time has gone by. But they were just so interested in meeting her. So, these people get along better on a day-to-day basis. There's all kinds of stuff that they work together on; it’s just kind of not stuff that you read about in the news. And that's the thing people really don't see. But that's the important part, and that's how our democracy does seem to manage to survive.