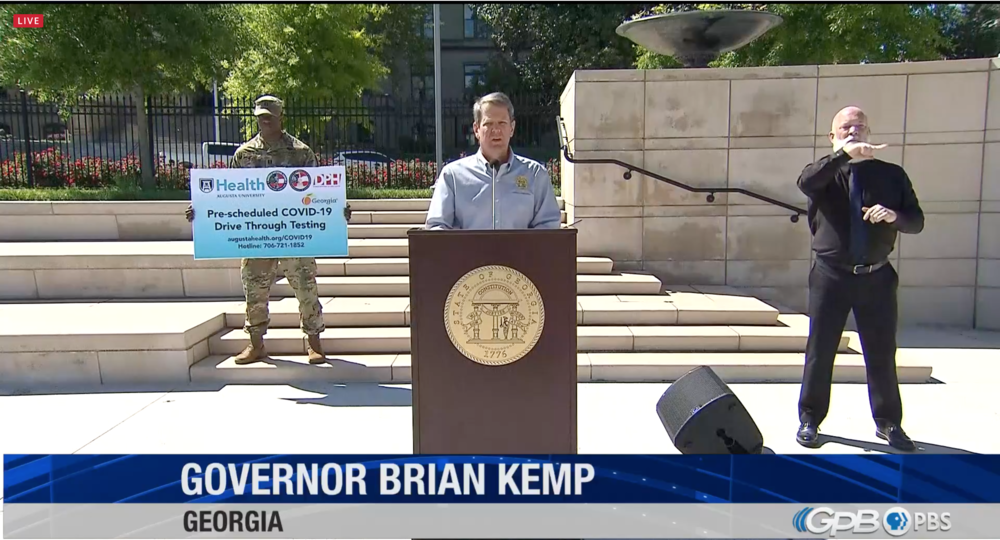 Gov. Brian Kemp announced Monday Georgia was "on track" to begin reopening sectors of the economy as early as this week, while pledging to continue efforts to address the state’s lag in testing.

The statewide shelter-in-place order will still run through April 30.

In-person dining at restaurants will resume starting Monday, April 27, he said, but all of these  reopenings are contingent on businesses meeting a long list of health and safety restrictions.

"The entities which I'm reopening are not reopening as business as usual, each of these entities will be subject to specific restrictions, including adherence to the minimum basic operations, social distancing and regular sanitation," Kemp said. "Minimum basic operations includes but is not limited to screening workers for favor and respiratory illness, enhancing workplace sanitation, wearing gloves and mask if appropriate, separating workspaces by at least six feet and teleworking were at all possible in implementing staggered shifts, subject to the specific social distancing and sanitation mandates."

The decision comes as an about-face from interviews at the end of last week, where the governor said future data would help determine what steps he would take next. But Kemp said Monday that he was considering economic health as well as physical health in making his decisions.

“I don’t give a damn about politics now,” Kemp said. “We’re talking about somebody that has put their whole life into building a business that has people that they love and work with every single day working in many of these places that are at home, going broke worried about whether they can feed their children make the mortgage payment.”

Georgia’s Department of Labor has processed unemployment claims for nearly 10% of the state’s workforce, but the coronavirus has ravaged long-term senior facilities, spread like wildfire through southwest Georgia and claimed the lives of at least 775 people.

"These are tough moments in our state and our nation, I hear the concerns of those that I'm honored to serve," he said. "I see the terrible impact of COVID-19 on public health, as well as the pocketbook."

While city and county officials created a patchwork of regulations before Kemp’s delayed decision to issue a stay-at-home order, the same will not happen as the economy restarts. The governor’s missive says that local orders cannot be stricter or more lax than his statewide mandate.

Bars, nightclubs, operators of amusement park rides and live performance venues will remain closed in the days ahead as the state continues to evaluate data around the virus' spread.

"We will get Georgians back to work safely without undermining the progress that we all have made in this battle against COVID-19," he said. "Today's announcement is a small step forward and should be treated as such."

Hospitals and health care facilities will also be allowed to resume elective surgeries.

In recent weeks, Georgia expanded the definition of who could be tested for COVID-19, deployed members of the Georgia National Guard to aid with testing sites and announced partnerships with both private companies and research universities in the state to expand woefully inadequate testing capacity.

RELATED: Coronavirus in Georgia In Data

Widespread testing is the centerpiece of both the White House guidelines and advice from public health professionals, and something Georgia is still lacking. Dr. Carlos del Rio, executive associate dean for Emory University at Grady, said focusing on the economic impact of the virus is important, but the state also needs to scale up testing and take quick action if cases spike.

“Without enough testing, without enough supplies for doctors and nurses, and without listening to medical professionals, the governor’s actions today will make this crisis even worse and put more Georgians at risk,” Democratic Party of Georgia chairwoman and state Sen. Nikema Williams (D-Atlanta) said.

The governor also announced a partnership with Augusta University to promote a free telemedicine screening app that connects symptomatic Georgians and asymptomatic frontline workers with medical professionals that can refer people to be tested for the coronavirus. 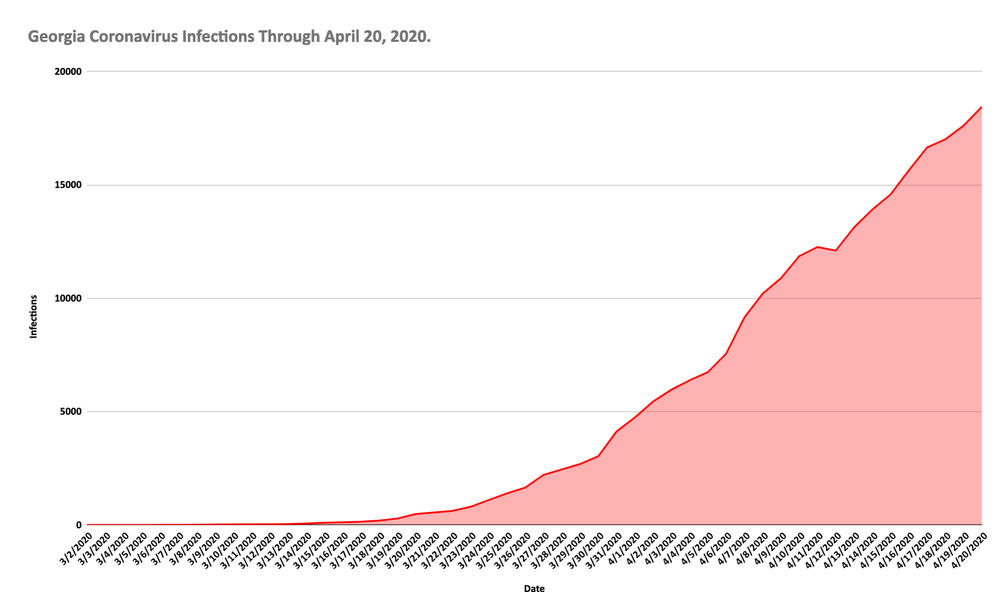