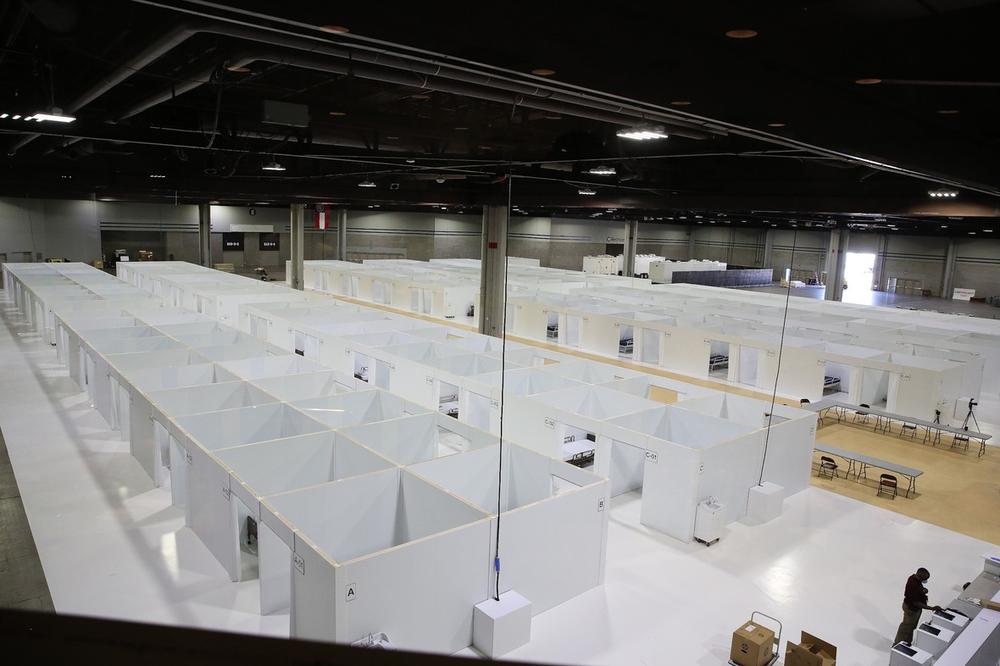 A 200-bed hospital constructed in part of the Georgia World Congress Center in Atlanta is complete.

Updated projections from a prominent model suggest Georgia is through the worst of its coronavirus crisis, but mounting evidence of outdated or missing data means top officials do not have a complete picture.

This comes as the death toll in Georgia’s long-term senior care facilities continues to rise and the state’s public health lab admits a gap in knowledge around racial impact of COVID-19 comes from omitting that question from a testing form.

As of noon Saturday, April 18, there are 17,841 reported COVID-19 cases in Georgia, and about 20% of those have resulted in hospitalizations. At least 677 people, or 3.79% of those people with confirmed cases, have died.

Here is the latest coronavirus news from Georgia for Saturday, April 18, 2020.

The University of Washington’s Institute for Health Metrics and Evaluation revised its COVID-19 model again Friday and says Georgia might have already hit the worst of the pandemic.

According to their tracker, the peak day for deaths was April 7, where it says there were 100 deaths reported in a day.

But data from the Georgia Department of Public Health tells a different story: so far, the deadliest day was April 6, when 40 people died of the virus, followed by April 3 and then April 14. There is a lag time between someone’s death and then when it gets reported to DPH.

From the COVID-19 dashboard:

Please note that these data represent our most current understanding of case deaths at the time of report. The most recent days of these trend data are impacted by a reporting lag that varies based on how the case is reported to public health and are subject to change.

If you look at the daily confirmed cases of COVID-19 in Georgia, you’ll also notice a reporting trend: cases are lower on weekends, then spike at the beginning of the week, also reflective of a lag in reporting.

In a Friday update, the Georgia Department of Community Health said that more than 230 long-term care facilities have positive COVID-19 cases, up from 156 last week.

At Arbor Terrace at Cascade in Atlanta, 40 of the 52 residents have tested positive, and 15 have died.

In all, those facilities have reported 250 resident deaths, more than 1600 resident cases and at least 800 staff with the virus.

At least seven long-term care facilities across the state have reported 10 or more deaths.

The Georgia National Guard has been deployed to clean long-term care facilities across the state.

Georgia’s reported death count is 668 as of Friday evening, but is definitely much higher.

The AJC reports that up until this week, state officials counted only deaths where COVID-19 was confirmed by lab tests.

That means symptomatic people who died before they could be tested aren’t being added to the counts.

In Albany, one of the hardest-hit areas in the country, some people died at the hospital before their results could come back positive and were posthumously added to the total.

But elsewhere across the state, a shortage in testing has led to local health officials opting not to test those who have died.

Wonder why there’s a lack of racial data?

The AJC also reports that one reason Georgia officials don’t know the race of many people who have coronavirus is because… they left the question off of a testing form used.

Georgia has not had race or ethnicity data for about half of the reported positive coronavirus cases. The omission on the state’s testing form doesn’t account for all the cases where the race of the person tested was not recorded. DPH receives test data not only from its own testing sites but also from a broad swath of sources, including hospitals and private labs.

In a Monday press conference DPH Commissioner Kathleen Toomey said her department was making sure information proactively comes in for future tests.

"Right now our priority is not retrospective but prospective, ensuring that we proactively test to ensure we get fully filled out demographic information," she said. "I think for our staff to go back and find 4,000 individuals and ask them that information is less valuable now."

After the newspaper asked why the data was missing, the state fixed the digital form.

Meanwhile, states have a blueprint to reopen their economies

At a White House briefing Thursday, Trump unveiled a roadmap for communities to begin the path to normalcy where new COVID-19 cases are steadily falling.

The White House's phased strategy is contingent upon states having data about case levels, the capacity to treat all patients and test healthcare workers, and the ability to trace the contacts of those infected. States can decide on a county-by-county approach, the 18-page document says.

Employers should be able to do temperature checks and contact tracing, the guidelines say.

The guidelines suggest three phases for states to reopen, with progressively relaxed levels of social distancing. Each phase would require a 14-day period of a "downward trajectory" of cases to advance to the next one.

…but Georgia’s not ready yet

While touring a 200-bed overflow hospital constructed in the sprawling Georgia World Congress Center Thursday, Kemp said it is time to start discussing next steps for the state, but there is not a one-size-fits-all approach.

“The situation we have in Georgia is our peak of when it gets here keeps moving further away,” Kemp said. “And we have other states like New York, Washington and California that are now on the backside of the peak… so the governors are going to have to make decisions based on what’s happening in the state.”

When he made the comments, projections from the University of Washington’s Institute for Health Metrics and Evaluation pegged the peak of Georgia’s COVID-19 cases and hospital use to the first week of May, while the state’s stay-home order currently expires April 30.

The governor said that the next week of data is going to help determine whether that order will be extended and what steps the state will take next.

“To me, I wish the peak was now and we’d be moving on the other side, so when it moves out it’s a little disappointing” Kemp said. “But on the other hand, every time the model moves further out, the numbers get better for our bed capacity.”

The toll of the virus is not limited to the health of Georgians, although 617 have lost their lives since the beginning of the pandemic.

The latest report from the Georgia Department of Labor shows at least 10% of Georgia’s population has filed for unemployment in the last month and over half a billion dollars in benefits has been paid out.

In an interview with CNHI, Commissioner Mark Butler said his agency is scrambling to keep up with a system not designed to withstand this kind of demand.

“Across the state, residents struggling to file for unemployment benefits have reported dropped calls and web pages that won’t load.

But if the department added 1,000 more phone lines and tripled its staff, he said, it still wouldn’t be enough.”

These are the things that Kemp must grapple with.

The mayor at the center of the most intense viral outbreak in Georgia says he hopes Kemp will defer to local mayors.

Albany Mayor Bo Dorough enacted a shelter-in-place order well before Kemp enacted one for the entire state, and Dorough still wishes he could under state law be stricter than the governor. For instance, take church services, a sticking point in southwest Georgia, where the outbreak began in church communities attending a funeral.

“We were on a call with clergy today and some of the ministers advised us that they had talked with the governor's office and they were informed that drive in church services are acceptable,” Dorough said. “And it was our opinion that if we're going to proscribe any gatherings of more than 10 people, that's absolutely contrary to what directive we're giving you.”

That conflict between what he feels is best for his community and rules set by the governor illustrates for Dorough something he said even for him was a hard concept to wrap his head around until very recently.

“Up until about 10 days ago, I, like many others, thought we were looking at one day on the calendar when all the restrictions were going to be lifted and everything was going to return to normal,” Dorough said. “But now we realize that this has to be a transition.”

The Georgia State Election Board passed an emergency rule Wednesday allowing county officials to set up secure drop boxes for voters to return their absentee ballots as local administrators grapple with running an election during a global health crisis.

This could give some of Georgia's 7 million-plus eligible voters another way to return their ballots for the June 9 primary election only, as counties begin to close polling places because of staff shortages and try to implement social distancing at the polls.

County registrars are now authorized to set up one or more secure locations on government-owned property where voters can drop their completed absentee ballot any time before the polls close at 7 p.m. on Election Day.

Social distancing in the sky

A group of local pilots are bringing a sky-sized message to health care workers around Metro Atlanta, one flight at a time.

The Falcon RV Squadron is a group of Peachtree-City based pilots that usually perform in air shows.

Recently, they’ve been taking off and drawing giant hearts in the air over hospitals to bring hope to the community. 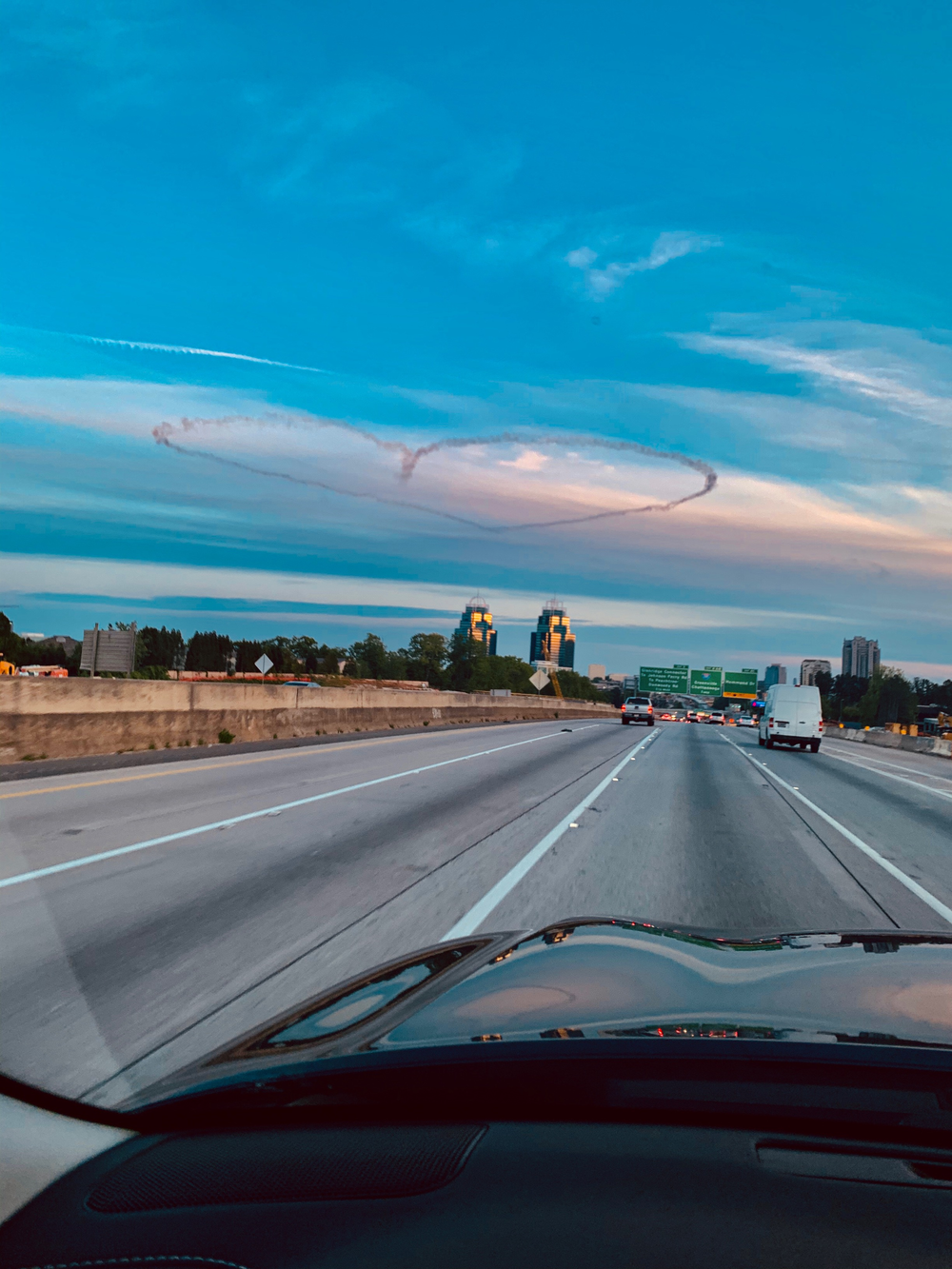 A heart in the sky for healthcare workers in Atlanta.