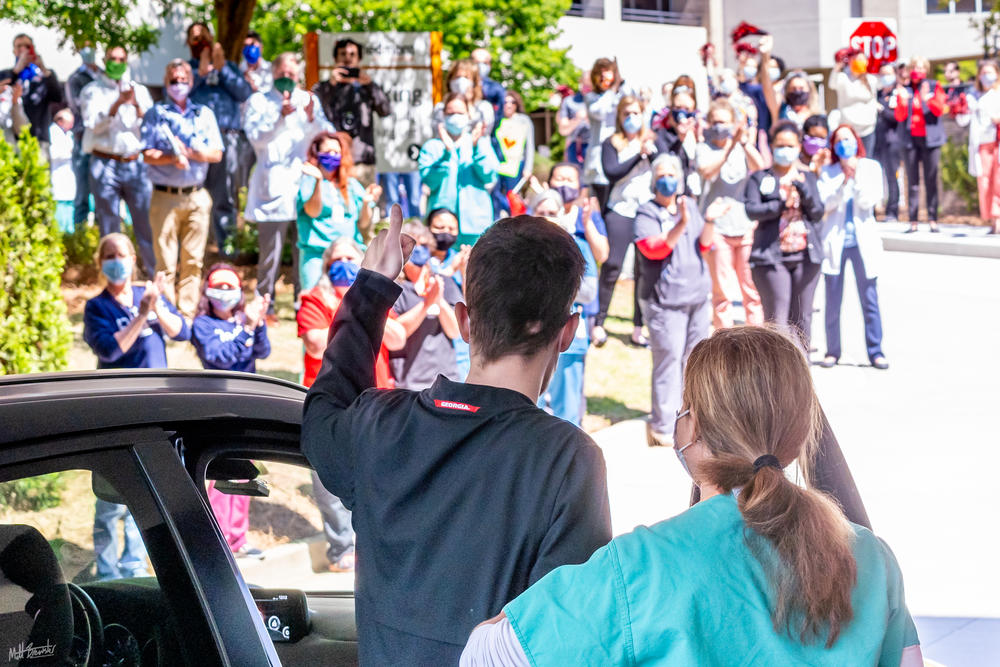 Caption
Jeremy Klawsky received a "hero's walk" after being discharged following his five-week battle with COVID-19.

University of Georgia's football coordinator Jeremy Klawsky received a hero's celebration after recovering from his five-week battle with COVID-19.

Even in a season of social distancing, he didn't leave alone.

Hospital staff at Piedmont Athens Regional Medical Center, including his doctors and nurses, lined the halls as he was leaving to cheer him on and congratulate him on his recovery. His coworkers in the Georgia Athletic Association were there as well, greeting him outside.

Jeremy Klawsky arrived at Piedmont Athens Regional weeks ago. He was critically ill with COVID-19, but he recovered and was discharged today as hundreds cheered.

The celebration, what some are calling "celebration walks" or a "hero's walk," was one of several that happened since the pandemic began.

Caroline Maddox spent two weeks in a battle with COVID-19 at Augusta University Medical Center. It wasn't an easy fight, either. At one point, she spent eight days on a ventilator.

To celebrate her victory, doctors did the same for her. The staff, including the doctors and nurses that stood by her as she fought for her life, lined the walls to clap and applaud her as she was discharged and taken home.

Lilly Maddox, Caroline's sister, said those doctors provided hope to the family when things were dire.

"Each time we called and had questions, they never hesitated to answer or explain to us what was going on," Maddox said. "God is so good and I can't say enough about this hospital."