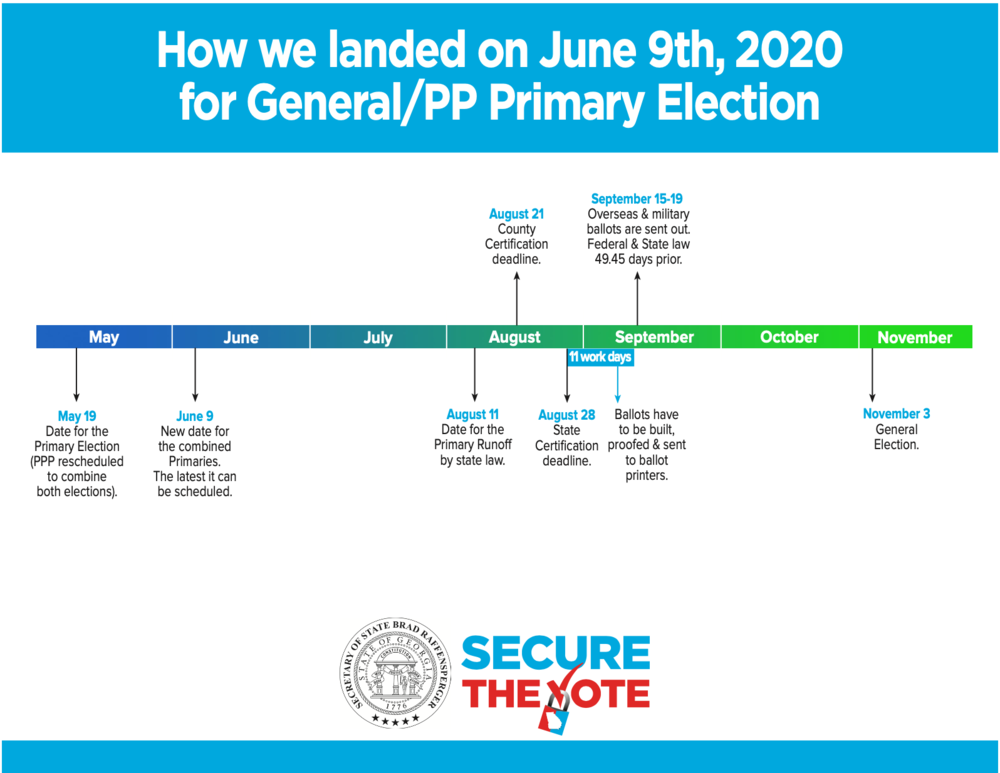 Georgia's May 19 primary election is being delayed three weeks because of the coronavirus.

Secretary of State Brad Raffensperger is postponing Georgia’s presidential primary and general primary election to June 9, delaying the vote by three weeks amid concerns over safety at the polls.

In an interview with GPB News, the state’s top election official said the extension of Georgia’s public health emergency to May 13 gave him the legal authority to move the vote, as well as reports of challenges local officials were facing trying to prepare for an election in a pandemic.

A GPB News/Georgia News Lab survey of more than 80 of the state’s election directors last week found them grappling with a potential shortage of poll workers, voting location closures and difficulty implementing social distancing at the polls.

“Looking at the situation on the ground, county elections officials were still having major issues with the ability to staff their precincts with poll workers, and we felt that moving out the elections three weeks will give them additional time,” he said. “We understand it will still be a challenge, but it’s something that’s a hard and fast date.”

From start to finish, deadlines for an election cycle run several months, so Raffensperger said June 9 is the latest date the primary can be held because of the November 3, 2020 general election.

Federal and state law require overseas and military ballots to be mailed out for that election the week of September 15, about 45-49 days before the election. The state and local officials have to create, proof, print and program the ballots for that election before that time.

Since the primary is now rescheduled for June 9, state law requires the runoff election to be held nine weeks after that, or August 11. Counties have 10 days afterwards to certify their results, and the state has seven days after that, which would be August 28.

Just over two work weeks sit between the end of the primary election process and the first deadlines for the November election, so the secretary of state’s office says the primary cannot be moved back further.

Georgia’s presidential primary has already been delayed once because of the coronavirus.

The secretary of state's office has already taken the unprecedented step of mailing out absentee ballot applications to 6.9 million active registered voters in Georgia, and local officials are encouraging voters to use absentee-by-mail voting to minimize the number of people heading to the polls.

Raffensperger said that he will be voting on an absentee ballot himself in the June 9 election.

When early voting does get underway next month, it will be the first statewide election on Georgia's new $104 million touchscreen ballot-marking device voting machines.

When is the voter registration deadline for the June 9, 2020 election?

You can check your voter registration online by clicking here.

When will early voting for the June 9, 2020 election begin?

Georgia’s three-week early voting period will begin on May 18, 2020.

How will this affect runoff elections?

If a primary election heads to a runoff, the runoff election will be on August 11, 2020.

How can I become a poll worker?