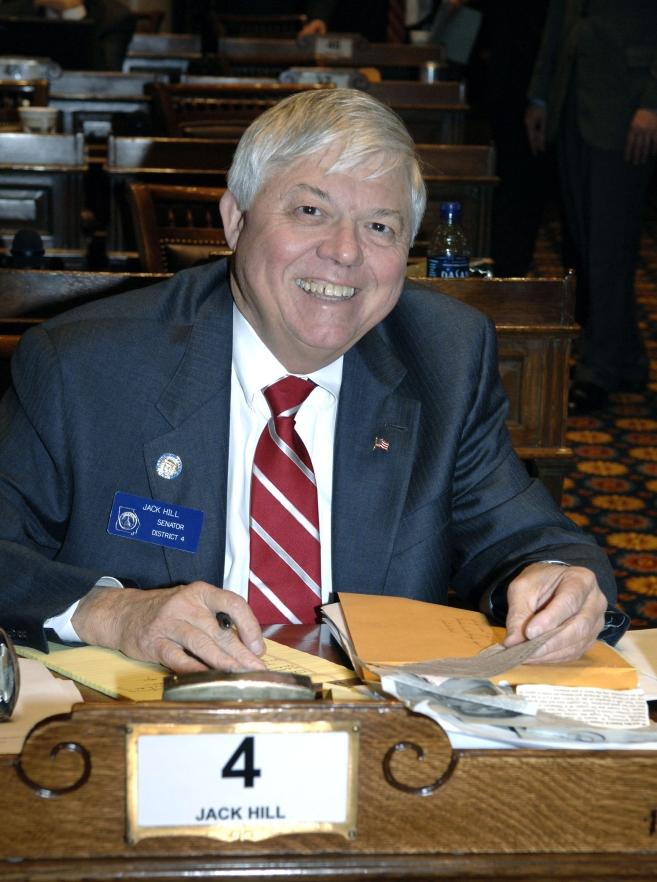 State Sen. Jack Hill (R-Reidsville), chairman of the senate appropriations committee, has died at the age of 75, according to a statement from Lt. Gov. Geoff Duncan.

Born July 15, 1944, Hill was first elected to the Senate in 1990 and switched parties in 2002 after Republican Gov. Sonny Perdue was elected. He served 33 years in the Georgia Air National Guard as a unit commander and as State Inspector General.

His death was not believed to be related to the ongoing coronavirus outbreak, and Hill was an institution at the state Capitol, widely respected by both parties for his deep fiscal knowledge and his friendly demeanor.

Lt. Gov. Geoff Duncan called Hill a "true statesman, a man of overwhelming integrity, and a servant leader" in a statement.

“For three decades Georgians have benefited from his leadership and his calm and steady hand at the helm," he said. "He exhibited all the characteristics we hope for in a leader and was a true friend to all. Jack always ensured we were good stewards of taxpayer dollars, but it was more than that, he led with kindness and clarity."

Gov. Brian Kemp mourned Hill's passing as well, calling him one of the "kindest, most thoughtful people I ever served with."

"His loss is devastating to our state, but he leaves behind an unmatched legacy of hard work and public service."

A statement on behalf of the entire state Senate said Hill would be dearly missed and called him a true public servant in every meaning of the word.

“Today, the Senate lost a true public servant in every meaning of the word, Sen. Jack Hill. Since 1991, Jack represented his home of Reidsville in the Senate and worked to make his community and his state a better place. As Chairman of the Senate Appropriations Committee, Jack provided his insight and attention to ensuring our state’s budget was balanced and fair. This was never an easy task, and was often a thankless one, but the state of Georgia is in a better place thanks to his years of dedicated leadership. More than anything, however, Jack was a true friend to everyone who had the opportunity to meet him. His fellowship will be dearly missed by all in the legislature and his years of experience can never be replaced. The Senate will continue to lift up his family and loved ones during this time and we encourage all who had had the privilege to know him to do the same.”

"When partisan tensions were high, he always made a point to say a kind word," she wrote. "He put people above party and worked tirelessly for all Georgians. What a tremendous loss."

Sen. Ed Harbison (D-Columbus) recalled Hill as someone who served "with unpretentious distinction and dedication."

"I was saddened to learn of the passing today of my long-time colleague Senator Jack Hill," he wrote. "Jack and I were the longest serving Senators in the senate. Senator Hill served as appropriations chair with unpretentious distinction and dedication. He’ll be missed.

House Speaker David Ralston (R-Blue Ridge) said in a statement that Georgia has lost one of its finest lawmakers.

“Senator Jack Hill was one of the finest public servants I have known," he said. "Quiet, studious, thorough, he exemplified the best in a leader. Senator Hill served with integrity. Georgia has lost one of its finest and I have lost a friend and a mentor. Rest In Peace, Mr. Chairman.”

Hill is not the only high-profile lawmaker to have died in recent months. In November 2019, then-House Rules Chairman Jay Powell of Camilla died while at a leadership retreat.