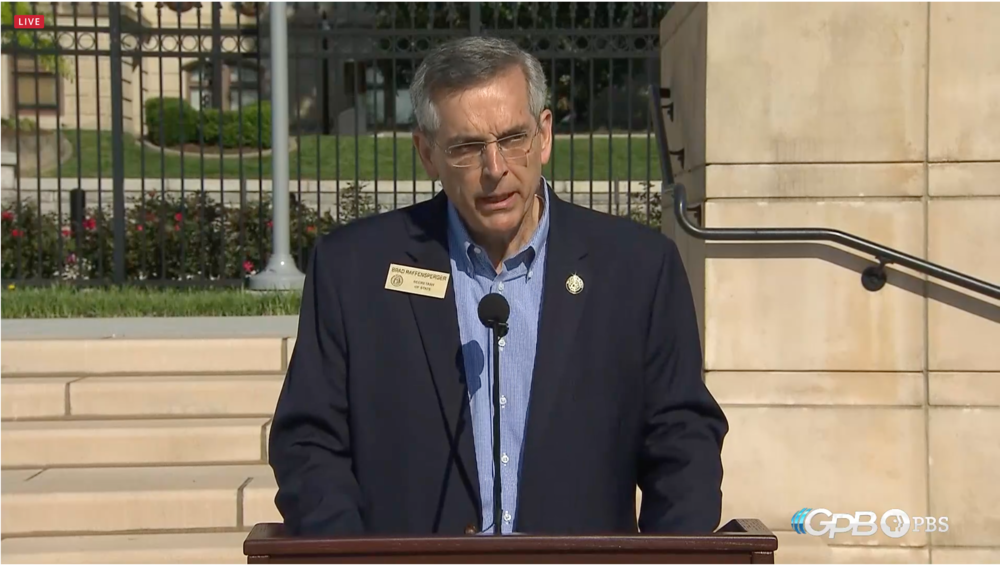 Republican Secretary of State Brad Raffensperger announces a new task force that will investigate allegations of fraud in the absentee mail-in voting process.

Republican Secretary of State Brad Raffensperger announced Monday a new task force that will investigate allegations of fraud within the absentee voting process as more Georgians are also encouraged to vote by mail in the upcoming May 19 primary election.

At a press conference outside of the Capitol, Raffensperger said the group would be "responsible for upholding the integrity of the vote in Georgia, whether at the ballot box or the mailbox."

"I have selected some of the state's premier law enforcement experts to fill out this team, elections experts, district attorneys and solicitors general who will be on the front lines assuring the people of Georgia that their right to vote and their right to be counted equally is secure," Raffensperger said. "This task force will focus on establishing the framework of detection of fraud."

Some of the things the task force will look at includes investigating signature mismatches on rejected absentee ballots, interviewing voters that are registered to vote at "non-residential addresses" and drafting a law that would make it a crime to vote in a federal election in Georgia and another state at the same time.

The state has faced criticism and legal challenges for its absentee ballot procedures, including a court settlement last month that requires the state to notify voters by email, phone and mail within three days if their ballot is rejected for a signature mismatch or other issue, or by the next business day in the 11 days leading up to Election Day.

In the 2018 general election, about 7% of Georgia voters used the absentee vote-by-mail process, and that number could grow as the threat of the coronavirus continues.

The secretary of state’s office says the new task force has been in the works for a while, and will be vital in ensuring the uptick in absentee voting doesn’t come with bad actors trying to game the system.

Last week, the state began mailing all 6.9 million active registered voters an absentee ballot application to make it easier for those who normally vote in person to cast their ballot from home.

"Most studies have always shown that in-person voting, particularly with photo I.D., is very secure, and [absentee voting] is the one concern that all national elections experts have always identified as one area of potential weakness," Raffensperger said at the press conference. "So that's why we're focusing on that, particularly because we have this unprecedented situation where we are mailing out absentee ballot applications to active voters."

"It is clear the Secretary is caving into pressure by the Georgia GOP, who, upon discovering that Georgians would have a way to access the ballot amid a global health pandemic, went on record saying higher turnout would be devastating for Republicans," Hogan added. "It is despicable that Republicans in Georgia are leveraging a global health emergency as an excuse to further suppress the vote. The best use of the Secretary of State's time and resources is to continue ensuring that every single Georgia voter, regardless of who they are or who they’re voting for, is able to receive and cast their vote by mail ballot without fear for their health or safety."

In addition to mailing active voters the absentee ballot application, the secretary of state also said his office and local elections officials are working to recruit more poll workers in areas that have a higher proportion of older volunteers, and has outlined steps poll workers and voters can take to minimize the impact of COVID-19 on the state's new $104 million touchscreen voting system.

Raffensperger also said in the press conference that he did not have the legal authority to postpone the May 19 primary election, and would revisit that conversation if and when the governor extends his state of emergency.

MORE: Here’s What State And Local Officials Are Doing To Prevent Coronavirus At The Polls

Republican Secretary of State Brad Raffensperger is continuing to urge Georgians to vote by mail in the June 9 primary, especially after reports of long...