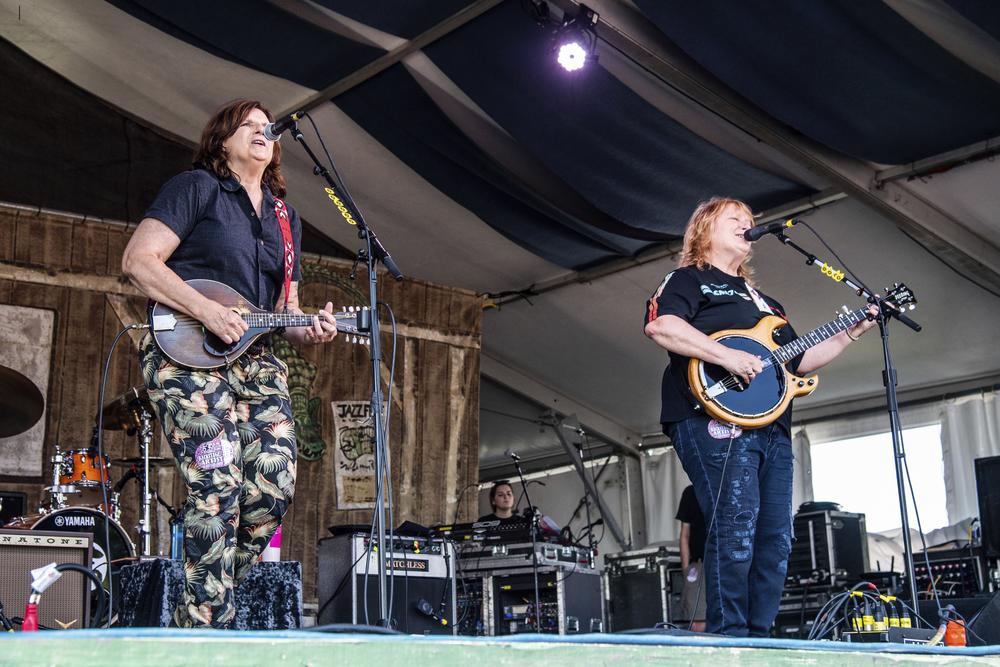 In mid-March — just as sporting events were scrapped, music and book festivals were canceled, and the Olympics were postponed — the Georgia-based folk band Indigo Girls were one of just a handful of popular artists who began streaming live performance online.

Emily Saliers and Amy Ray, the duo behind the band, brought in around 70,000 viewers for that concert, which was streamed on Facebook and Instagram live.

“It was just some way that we could bridge [the gap] between the shows that got canceled, all the separation that people were experiencing, and how much we need music to sort of make us feel better and join our community together,” Saliers said.

The pair also shared how they're coping with relative social isolation after being on the road for so long. Ray noted that adjusting to a slower pace of life while sheltering at home has proven difficult so far.

“I’m volunteering at the food pantry here. I’m just trying to do whatever I can do, because honestly I feel – I don’t know what it is – it’s like some weird, compulsive reaction to this,” Ray said. “I’m trying to slow down, but I just feel anxious about it. So, what helps me is to just do something for somebody else.”

The time away from touring has also given both women a chance to spend time connecting with family. Both Ray and Saliers have young daughters, and Ray noted that parenting through the pandemic has come with new insights and challenges.

“Kids are so interesting, because they’re processing a lot of things silently,” Saliers said. “So, Cleo [my daughter] won’t talk about it, and then all of a sudden she’ll pop out with a question about it. […] It’s very, very interesting to see the way kids process internally, and sometimes you have to keep checking in, just to see if anything is truly, truly disturbing them.”

Indigo Girls have made music through other difficult cultural moments like 9/11 and the 2008 recession. And after pushing back the release of their new album, Look Long, which they’d written before the pandemic had fully hit the United States, Ray reflected that performing those songs after the pandemic slows down will likely feel different.

“I think there’s going to be a heaviness to it, that wasn’t attached to the songs as I wrote some of them, that there will be now as I feel them, when I sing them,” Ray said.

For Saliers, however, it wouldn’t be the first time that one of her songs has morphed over time. She shared that while hits like “Closer to Fine” and “Galileo” feel roughly the same to her throughout the years, other songs can take on new meanings depending on the moment.

“And that’s kind of a cool thing — while the songs are timestamped when they’re recorded, they’re not timestamped in the life that they continue to live,” she said.

On the power of music to support the vulnerable

Saliers: I mean, my feeling is that the people that are vulnerable, [or] were vulnerable then, that we were talking about in a lot of our songwriting pre-COVID virus, are still the most vulnerable now. [...] But it's true that all of us are in this boat together in a different way, that we're all vulnerable to a certain degree, and we've never in our lifetime seen anything like this.

And I feel a ton of gratitude because I have what I need, and [I] can be where I am and not have to worry as much. And so that makes me want to think about what other people are going through it, helping and finding ways to help.

On Ray’s new parenting challenges during the pandemic

Ray: You know, it's kind of hard because [...] you want to be honest. But you want it to be what they could handle. You don't want it to feel weird or secretive, because their imagination can be crazier than what you say to them sometimes. But in this case, the reality is crazy.

So, you know, we talk about it being a virus and how important it is for us all to stay healthy, and protect everybody else by staying healthy, and release some of that stress, but still be informed and answer questions if she has them.

Ray: I think Emily and I are different in that. But I definitely know within the first writing of the song, whether it’s the melody or the lyrics, that steer me a certain way.

I often can hear Emily in my head, and I know it’s an Indigo Girls song. So, for me, Emily is a muse for me. And my country band is a muse as well. So, I pay attention to the muse. And if it doesn’t fit in with any of that category, I throw it in another pile.

Saliers: There are other songs of mine, and even of Amy's, that I'm living through as I'm singing them, that take different shape and different meaning depending on what's going on in the current moment, or where we are in life.

And that's kind of a cool thing, because while the songs are timestamped when they're recorded, they're not timestamped in the life that they continue to live. I've been very grateful for that — that I have Amy and her songs instead of just my songs.

And that we have this double life, and we write differently and express ourselves differently, that double experience of life that I get to live. And the songs continue to grow, and mean different things at different times.