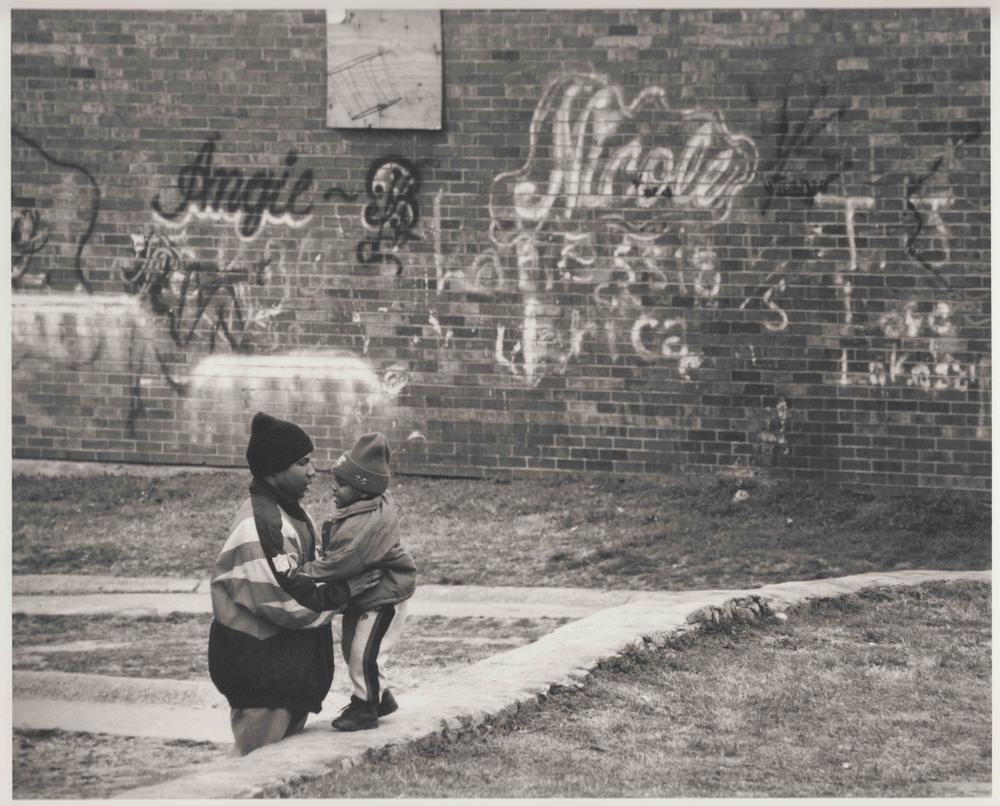 A man and child next to a wall full of graffiti in the East Lake area of Atlanta, 1996. The documentary "East Lake Meadows: A Public Housing Story" airs on PBS on Tuesday, Mar. 24 at 8 p.m.

Atlanta’s East Lake Meadows public housing project first opened its doors to Atlanta’s low-income residents in 1970. By the end of the century, it was being completely demolished. The complex, once known as “Little Vietnam” for its violence and crime, was troubled from the outset by disinvestment, white flight, and concentrated poverty — and was also home to dozens of children and families striving to build a better life.

The nuanced policies and personal stories behind the notorious Atlanta housing project are the subject of a documentary airing on PBS, East Lake Meadows: A Public Housing Story. The film airs on PBS on Tuesday, Mar. 24 at 8 p.m.

On Second Thought spoke with former resident Lawrence Lightfoot, whose perspectives on life in East Lake Meadows were featured in the documentary. Filmmaker Sarah Burns, who directed and produced the film along with David McMahon, also joined the conversation.

Burns, who also directed the Peabody award-winning The Central Park Five, shared that the film allowed her team to dig further into how segregation and racism continue to affect people’s experiences in the United States. She explained that public housing projects do not always solve the problems they aim to ameliorate.

“This is a place that is set up to fail,” she said of the East Lake Meadows housing project. “We tend to blame the people who live there for [the] problems, as if it’s their fault that the housing is not being maintained, when it’s actually the government that’s supposed to be doing that.”

Lightfoot also shed light on some of the common misconceptions and prejudices he’s experienced having lived in East Lake Meadows. Even after his family moved out, Lightfoot says he continued to return to East Lake Meadows to spend time with his friends there.

“[What] people don’t understand is, they were good friends,” he shared. “And they had dreams and hopes just like anybody else. They just happened to live in the projects.”

On why Burns decided to make this documentary

Burns: This thematically, actually, relates completely to our other films. It deals with the larger systemic issues, questions about segregation and racism, that play into so much of our lives and our experiences in this country. And so, we were interested in this story because it gave us a chance to get into that. And we're storytellers — that's what we do. And this was a really terrific opportunity to dive into this one place, and let people tell their own stories. And for that to become the kind of center of something that allows us to ask much bigger questions about our housing policy, about the history of public housing, about the history of housing segregation, and how we got here.

On why Lightfoot wanted to be a part of the documentary

Lightfoot: Well, you know, it’s part of my history. It’s part of what makes me Lawrence. I grew up there, lost a lot of friends over there. You know, the story needs to be told. It really does [...]

Virginia Prescott: Any hesitation on your part, at all?

Lightfoot: No, not at all. You know, we want to tell our story. You get an opportunity to tell your [own story], you don’t have to worry about somebody else telling it. You can get it right. And most of the time when you're doing documentaries, they don't do them from the perspective of the people who actually live there.

On why the area for East Lake Meadows was chosen

Burns: They put [East Lake Meadows] there both because that was cheap land to use, but also because it was on the edge of the city. This was 1970. We're talking about a time when, by then, the population in public housing was that lowest income, mostly African-American population. And so, the city was not interested in having that front and center in the middle of the city. This was an isolated location as this neighborhood transformed on the edge of the city, [with] little public transit, where we could just kind of push the problems that were inevitable there, and ignore them.

Burns: When we started talking to residents — we spoke to hundreds of residents, [who were] former residents of East Lake Meadows. And so many of them said, “But are you going to talk about the good stuff?” Because, so much of the coverage [and] treatment of East Lake Meadows has always been about that one thing — about the violence, about the crime, about the drugs. [...] And that has been the narrative about East Lake Meadows. And while that stuff is true and that happened, as Lawrence has said, there was also the ways that this community pulled together — not in spite of, but because of these difficult conditions, and kind of created, in many ways, a really strong community. Because they had to. Because the government wasn't there, because the social services weren't there. [...] We heard so many people say, “Don't forget about the good stuff, the happy times. That was there, too.”

On what “home” means to Lightfoot today

Lightfoot: Home is where the love is. You don't look at the walls, you look at the people in the house — you know, my brother, my sister, my mom. I'm gonna say, 95% of the people out there were good people. But you only heard about that small percentage that stayed in the news. You know, when the kids are out there, playing football in the street and enjoying themselves, no cameras are going to be around. Unless somebody gets shot. This is supposed to be the country of dreams. [Just] because somebody is poor, and presumed ignorant, does not mean they don't have dreams. Because they are not as educated as you, [it] does not mean they do not have dreams. [...] It is what it is. It's a reality that we have to live with. But it's not right. 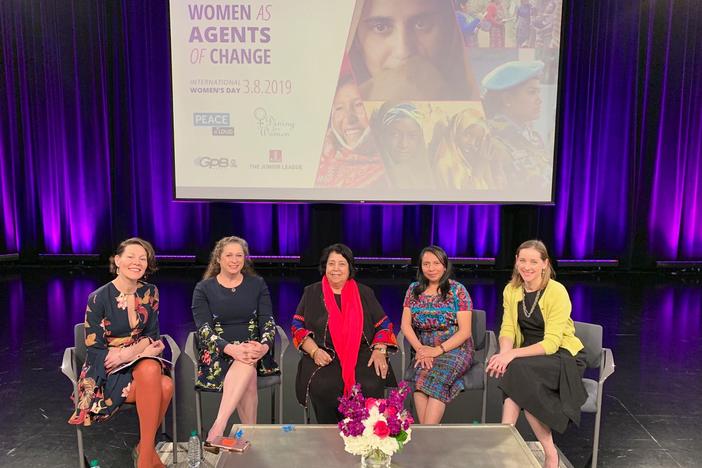