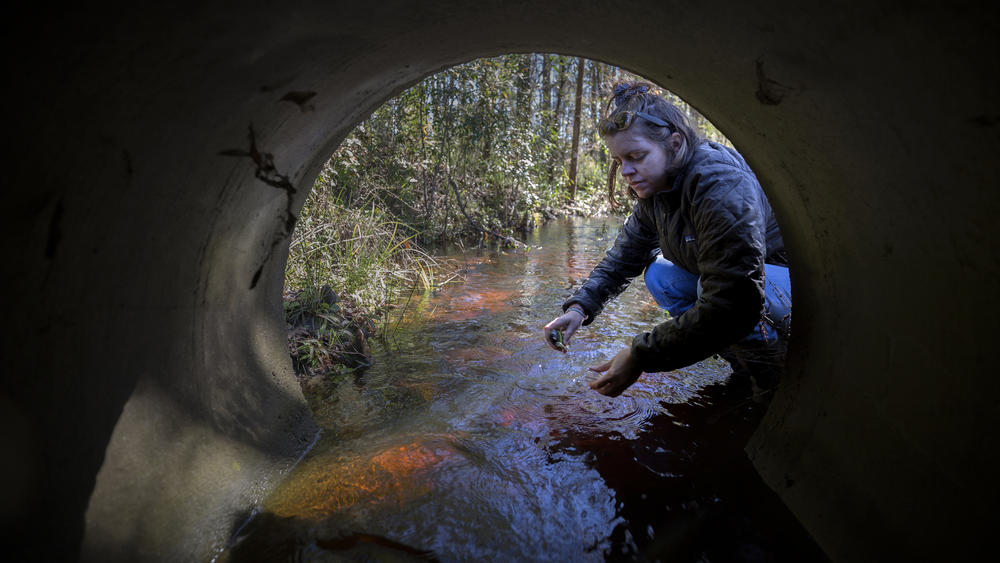 Home septic systems are usually out of sight, out of mind. You don’t think about them until they back up in your yard or toilet.

But there can be problems long before that, and rising sea levels are making problems worse.

Some communities on the coast are trying to fix this.Replacing failing septic systems leads to cleaner water, but it's expensive.

A few years ago, Ashley Cooper-Heath’s septic tank started leaking into her yard. She needs a ride-on lawnmower because she’s in a wheelchair, and the mower got mired in the wet spot.

“I got stuck right in the middle of the septic,” she said. “So I can't get off the lawnmower because I'm in a wheelchair, so I was kind of sitting up there just going, oh, well, this stinks. No pun intended.”

She had to wait for a neighbor to come by with a golf cart to help her out. But Cooper-Heath still couldn’t replace the leaky septic tank.

“We actually had somebody come out and give us an estimate and it was pricey,” she said. “So we were like, okay, we'll work on it. It just won't be anytime soon.”

Cooper-Heath lives right on the water, in a part of Camden County where everybody is on septic. And most people are in the same boat: they can’t afford to repair or replace their systems.

“I knew that our septic was failing, but I didn't realize that the entire community where we live, the septics were failing. So everything was flowing down to the river without, like, even thinking about it,” Cooper-Heath said.

In fact, enough septic systems are failing in Camden County that the Horse Spring Creek watershed has been listed as polluted for years. But St. Mary’s Riverkeeper Anna Laws said she has seen a drop in the level of fecal coliform bacteria.

“So basically people had overflowing septic systems in the area. And as soon as they were pumped, we immediately saw a drastic reduction in results,” Laws said.

The septic systems got pumped thanks to a grant the county received to clean up the water by inspecting, pumping, and replacing failing septic, all for free. Ashley Cooper-Heath got a new septic system through this program.

All told, the county has replaced about 20 systems and pumped about 30. And the water tests improve once the septic systems are fixed.

But this is all just in one area of the county, near the polluted waterway. Environmental Health Manager Terry Ferrell said with the current grant funding, they can’t fix the septic elsewhere.

“We would love to,” he said. “The only issue with doing the program in other areas is this is the only spot that really qualifies through this grant program.”

The best Camden County, or any community, can do without funding to replace more systems is to inspect them. The health department cannot require septic maintenance or inspection, but the county can tie septic to public services, like solid waste pickup. You want your trash picked up? You have to get your septic inspected.

“And now you might be faced with, you know, a five, ten, fifteen thousand dollar repair bill. So the next step consequences of these programs can also give people the heebie jeebies,” Hill said.

So even if coastal communities can find problem septic systems, they’ll likely remain problems without some source of money to fix them.

Read more about coastal septic and climate change in this Sunday’s Savannah Morning News or at savannahnow.com. And listen for more stories in this series on GPB.