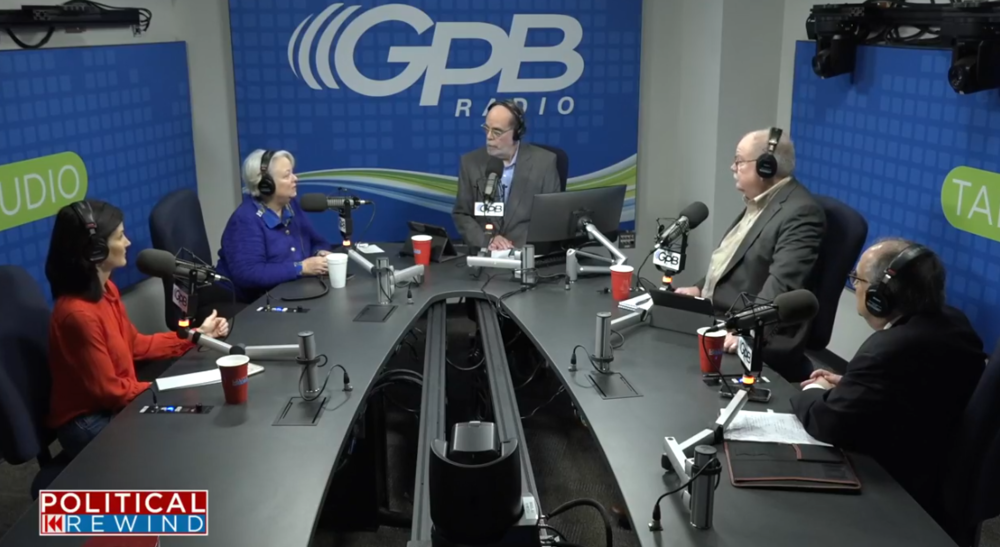 A screenshot of the Political Rewind panel in studio at Georgia Public Broadcasting Friday, March 6, 2020.

Today on Political Rewind, a busy week in national politics will impact how the candidates for president campaign in Georgia as the March 24 primary approaches.

Also, President Donald Trump had planned for a Friday visit to the Center for Disease Control in Atlanta, but those planned were postponed this morning. Now, that trip is back on, according to White House officials.

The president is scheduled to visit the CDC this afternoon to highlight his administration’s response to the coronavirus.

These highlights have been edited for clarity and brevity.

On what cost Elizabeth Warren’s her campaign:

Bill Nigut: How much do you believe [Sen.] Elizabeth Warren's fall from being the front-runner months ago to being out of the race, and winning no states at all, has to do with gender.

The question that keeps being asked not by me, but by the pundits, talking heads and people on the street is, “Can a woman win?”

That question being raised every single day is defeating two women candidates. We as a society cannot accept that a woman can win. I think gender had a tremendous amount of influence in the defeat of three excellent women candidates, Elizabeth Warren being at times a very strong front-runner.

Patricia Murphy: Elizabeth Warren suffered from some institutional disadvantages. One is that both other men have run for president before. Additionally, female candidates do not have the institutional financial resources that men tend to have.

And, to Margaret's point, voters want somebody to beat Donald Trump. If there is a risk that a woman couldn't do that, no matter who the woman is, no matter how qualified, no matter how many plans, the woman is not going to get elected because that woman has never been elected.

I do also think she ran into some major headwinds because she is so dedicated to specificity. She started talking about how she would pay for Medicare-For-All and how taxes would go up and she admitted that. I think she had a lot of problems. One of them is being a woman.

Edward Lindsey: Well, first off, as the as the husband and brother of three very accomplished professional women, I have seen them have to break down barriers that men don't have to deal with. I'm not going to diminish that that role. But there were other concerns as well with Elizabeth Warren.

And the major one was that she was trying to fill the lane that was already possessed by Bernie Sanders. Yes, she did spike last fall. But keep in mind, she spiked last fall when there were questions about Senator Sanders health right after his heart attack.

She is a very accomplished woman and a very strong advocate for progressive values. But she just couldn't break through given that Bernie Sanders was already in front.