Secretary of State Brad Raffensperger speaks at an election warehouse in DeKalb County.

This week’s early voting for the presidential preference primary is the first statewide implementation of the new $104 million touchscreen voting system with a paper ballot component.

Secretary of State Brad Raffensperger said more than 17,000 voters across Georgia used them on Monday, and called the “Herculean task” of preparing them for early voting a success.

“So far, we’re doing great, with just a few minor issues,” Raffensperger said in an interview Monday. “[For example,] there were 29 voters by 7:30 a.m. down in Muscogee County and it was going seamless there.”

More than 7.2 million Georgians are registered to vote, and the state’s top election official expects record turnout this election cycle, including 2 million ballots cast in the March 24 presidential primary.

“We expect 75% of people will show up on March 24 and the other 25% will be voting early,” he said. “That’s a great opportunity for us to test and stress test the entire system for all 159 counties.”

While this is the first statewide election on the new ballot-marking devices, several counties have acquired hands-on experience already, using them in a pilot election last November and through several special elections for legislative seats.

Last week, all counties did a mock election where staff practiced the entire election process and the state practiced tabulating results. Raffensperger said there weren’t major issues, but there were common errors counties could learn from, like mistakes working with the electronic poll book that checks voters in.

“But that's why you want to do that mock election, to get counties prepared for now, because we're in an actual live election,” he said. “Every result counts… We want to make sure we get it right, and so do they.”

The high-profile meltdown of the Iowa caucuses and the subsequent question over when results would get reported is not something that Georgia will have to worry about. For one, the primary is conducted by elections officials and not a political party.

But the secretary of state also said that there are fewer moving parts when it comes to closing down the polls. Under the old system, poll workers had to take memory cards from every voting machine, consolidate them down and then deliver them to a central location for tabulation and upload.

The new ballot-marking devices are connected to a printer that creates a paper ballot with a text summary of your choices and a QR code. That paper ballot is inserted into a scanner, and the QR code is scanned and stored on one memory card per scanner, making tabulation quicker.

“We also high speed scanners at each of the county election offices, so all your absentee votes will be counted a whole lot quicker,” Raffensperger said. “Some counties that historically wait until 12, 1, 2 o'clock in the morning for those big races ... we think we'll get those results several hours sooner.”

In other words, Raffensperger said Georgians should know by the end of March 24 which candidate on the Democratic side of the presidential primary will have the most votes.

The rollout of the new method of voting came on a tight timeline that saw more than 33,000 BMDs shipped to the state, tested and delivered to all 159 counties in a span of a few months, part of the most expensive and expansive single implementation of a new voting system.

Raffensperger has said the election administration process will get smoother with each cycle, and that his top concerns remain keeping elections secure from threats digital and physical and keeping lines below 30 minutes.

When asked about the threat of coronavirus, he said his office was monitoring developments and will see what further actions need to be taken in the coming weeks. For now, he wanted to remind Georgia voters about the state’s no-excuse absentee voting law and encouraged people to follow health precautions. 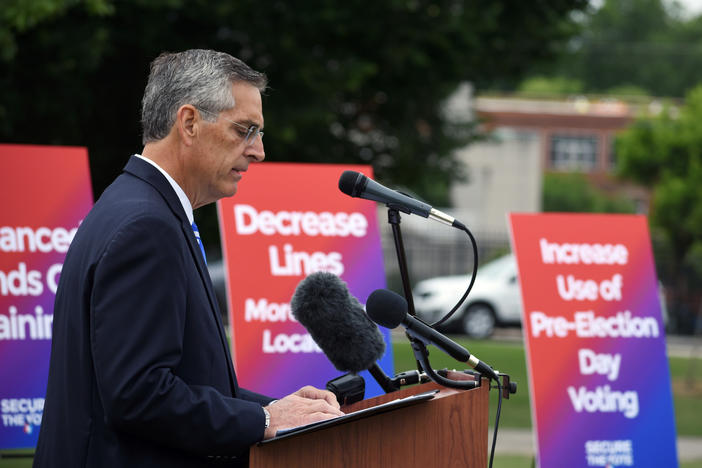