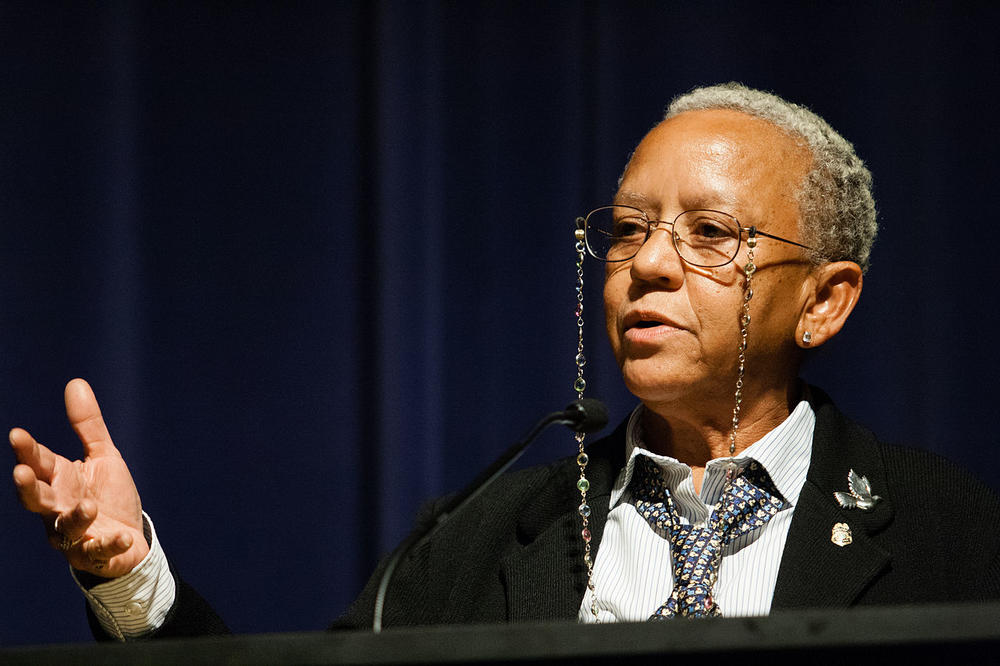 Nikki Giovanni speaking at Emory University in 2008. She returns to Emory for a free reading this weekend, at 4 p.m. on Saturday, Feb. 22.

Soon after Nikki Giovanni enrolled at Fisk University in 1960, she was asked to leave for expressing “attitudes unbecoming of a Fisk woman.” A decade later, Giovanni was named “Woman of the Year” by Ebony Magazine.

Giovanni is among the most celebrated living poets and has published nearly 30 collections of poetry, essays, anthologies and children’s books. She was a pioneer in the Black Arts movement of the 60s and 70s, and has been cited as an influence by hip hop artists.

She’s giving a free reading on Saturday at 4 p.m. at Emory University’s Schwartz Center for the Performing Arts. But first, Nikki joined On Second Thought to reflect on how she views her many accomplishments at this stage in her life.

On how Giovanni processes her own growth

You know, at my age, I'm supposed to grow. I'm supposed to have learned something. I think I’m supposed to have learned something. So I'm not embarrassed that I have continued to grow. Life is incredibly interesting to me [...] I was just speaking to St. John's recently.[...] and I said to them [the kids], you know, this is the most difficult, you know, being 13 and 14. That's what's really hard, because when you get to about 50, it's wonderful. You begin to look at life differently. And why wouldn't you? You can't spend 50 years and not ever having learned anything.

On what real success is for aspiring writers

Well, I worry just a little bit about the younger writers because I think that too much of what they're interested in is what they are calling success, which is not successful. And I start my classes actually by asking, ‘What's the number one bestseller?’ [...] And of course, nobody knows the number one best selling list. So, if you don't know what it is, then why do you want to be it? So let's talk about something else. Let's talk about what is a great book. And as we start to talk about great books, let's talk about the great writers. They're all dead. So one of the things is that if you're a great writer, you're probably not gonna know it because you're gonna be dead. And your book will be there, but you're gone.

On what she has carried with her through life

On how she has grown as a writer

You're only gonna be young once and then you go to middle age and then you go to being old. I don't think you can... I don't think you can blame yourself. And I think that some of my early work actually is pretty good. [...] But what I want my students to learn is, you do your best. It's not about that phony sense of winning and losing. It's about doing your best. [...] I don't want to get caught in what I said 50 years ago. I want to be able to have grown from that.

On how she got into writing

I think writing was probably always my thing because I don't have any other talent. And it happened because I'm not pretty. I can't sing or dance. I am not able to act. What else could I do? All I could do was watch. And if you watch, what do you have? You have words. [...] My ego does not require me to be what other people want me to be. So all I wanted to be was me — and that's words. All I have are words.

Today's show explored the mysteries of the human brain, how workers 55 and older are navigating the job market and opioid misuse among construction...