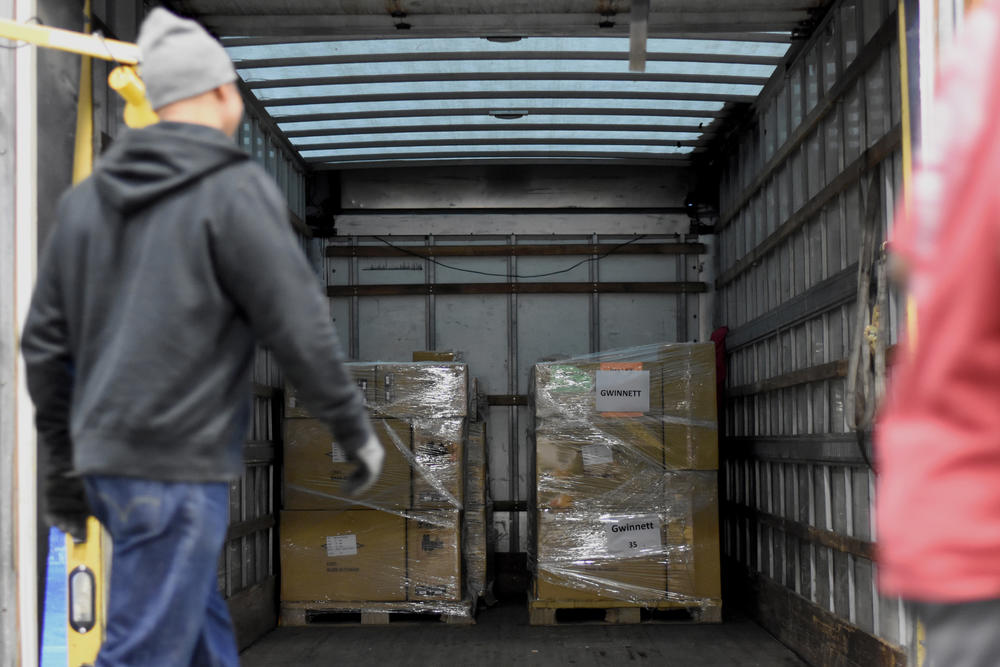 Workers load voting equipment into a truck at the state's election warehouse in Cobb County.

At the state’s election warehouse northwest of Atlanta Friday morning, a buzzing hive of workers loaded trucks with boxes of voting equipment, some of the final shipments to Georgia counties ahead of the March presidential primary.

Since December, the secretary of state’s office has delivered more than 200,000 pieces of equipment to the state’s 159 counties, ranging from touchscreen ballot-marking devices to printers used to create paper ballots to the scanners that will tabulate the voter’s choices.

The new system is the most expensive and expansive single implementation of voting equipment in the country, and comes as a heightened attention is paid to election problems and policy.

For Gabe Sterling, who has overseen the state’s logistical rollout, Friday’s shipments are a good sign but he’s not reveling in the pre-dawn packing just yet.

“I don’t celebrate until I get the packing slips back and everything accepted,” he said.

The trucks and vans were headed to places like Bryan, Thomas, Wayne and Gwinnett counties as part of a monthslong schedule that included earlier-than-planned deliveries to account for two special elections in southwest Georgia.

“It’s massive, and it took a real team effort… Dominion [Voting Systems] and the secretary of state’s office worked very closely together on making sure we  had the staff to get these things put through,” he said. “We were looking at the calendar and we saw it looming because we had a deadline to meet — and we are meeting it.”

Sterling said he wanted people to understand just how massive an undertaking it is to roll out a new voting system statewide on a tight timeline.

“It is next to impossible to explain how many things that had to go out, because it’s not just the big touchscreens, it’s the peripherals, it’s the [Americans With Disabilities Act] equipment, it’s every printer, it’s every scanner, it’s checking all the ballot boxes to make sure they’re not cracked or broken,” he said, gesturing to the expansive warehouse. “I did the math as something close to 200,000 pieces and parts and probably even more than that that’s gone out.”

That level of complexity and the short window of implementation comes as election integrity groups have urged Georgia to use hand-marked paper ballots instead.

Bruce Brown, a lawyer representing one of the groups suing the state over electronic voting machines, said that Georgia elections officials have long ignored calls to update its election system to something safe, secure and auditable.

“The state must do two things: provide a Constitutionally-acceptable voting system, and they have to do it on time,” he said.

With the $104 million ballot-marking device system, Brown and others contend the state has done neither.

Judge Amy Totenberg also directed the state to create a contingency plan for the 2020 elections in case the system was not ready. Cobb County piloted hand-marked paper ballots that used the Dominion scanners in the November 2019 municipal elections.

A group of Georgia voters and the nonprofit Coalition for Good Governance has been urging local elections boards to use hand-marked paper ballots in the presidential primary, highlighting their concerns with ballot secrecy and the fast-moving implementation of the new system.

With three major elections this year, Georgia’s new voting system will be quickly put to the test. Counties are making final preparations for the March 24 presidential primary, where early voting begins March 2.

In Fulton County, more than 2,000 poll workers are being trained to work at 198 Election Day polling places, while Athens-Clarke County officials are in the midst of performing logic and accuracy testing on all of its voting equipment, and places around the state are holding outreach events to familiarize voters with the new machines.

The voter registration deadline for the primary election is Feb. 24.

As coronavirus continues to spread in communities across Georgia, elections officials are grappling with the challenge of running a safe, fair and...

A new proposal filed in the Georgia state Senate Friday aims to cut down on long lines at the polls. SB 463 would require county elections officials to...