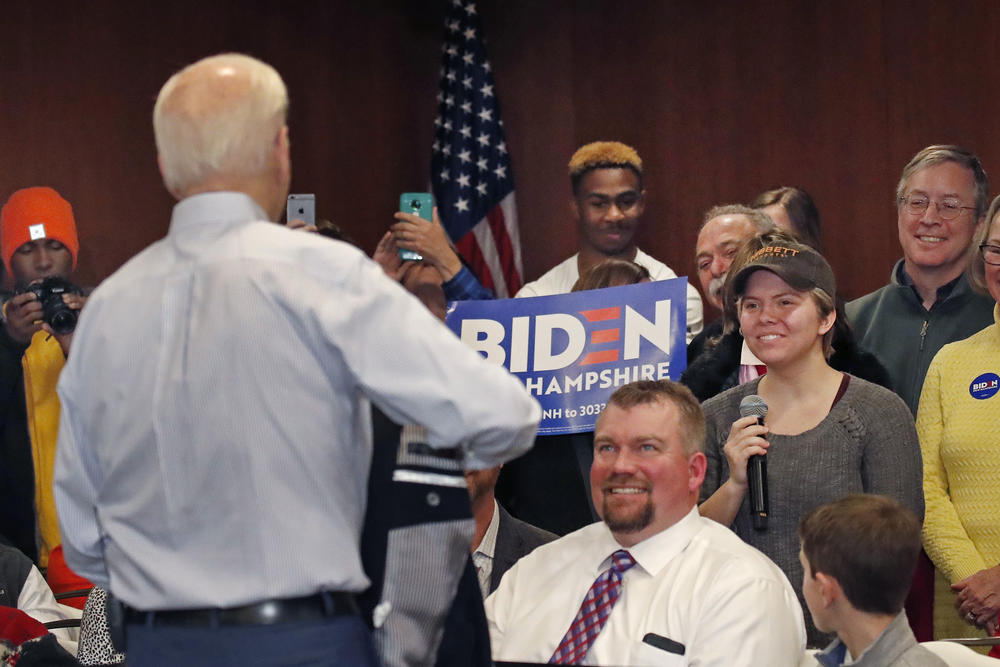 Democratic presidential candidate and former Vice President Joe Biden listens to a question from Madison Moore, at right with microphone, at a campaign event, Sunday, Feb. 9, 2020.

Madison Moore, the Mercer University student who was called a "lying dog-faced pony soldier" by former Vice President and presidential candidate Joe Biden, spoke to GPB News about the national response from her interaction with him on Sunday.

Biden said the reference is a John Wayne line from the 1953 movie Hondo, but sources don't agree on the term's meaning.

‘You are a lying dog-faced pony soldier:’ Joe Biden says to a woman at a campaign event in New Hampshire after asking if she had ever been to a caucus https://t.co/yTfLtve4df pic.twitter.com/O4CG8KsZaA— Reuters (@Reuters) February 10, 2020

Moore is in the junior year of her dual major in international affairs and economics and visited New Hampshire as part of Mercer's "Presidential Primaries, The Media, and Communications" course.

"You're arguably the candidate with the greatest advantage in this race. You've been the vice president; you weren't burdened down by the impeachment trials. So, how do you explain the performance in Iowa, and why should voters believe that you can win the national election?" Moore asked Biden in a New Hampshire town hall.

Biden said the question was fair, and asked Moore if she had ever attended a caucus. She said she nodded her head 'yes' by accident. That's when the former vice president called her a "lying dog-faced pony soldier," a phrase that has confused many.

"From my perception, it kind of took on an adversarial tone," Moore said. "I wasn't really trying to stir up a fight. I just kind of thought that was the question that was on a lot of people's minds at the time."

As far as Biden's odd turn of phrase, Moore said the reference confused her.

She said it's been a bizarre experience to become a newsmaker in the subject she is studying.

"It's surprising how willing some people in power are to abuse inequivalent power dynamics to get their point across and be defensive," she said.

Moore stands by her perspective that her question was a valid one.

"He's the candidate with the perceived greatest advantage in this race. He's been in the political scene for decades. He was the vice president for two consecutive terms," she said. "I'm just a college student. What do I know? So, I thought, maybe, he would have some other explanation for what happened in Iowa. I didn't really hear that."

Moore herself is an Andrew Yang supporter, citing his consistency on the issues.

"Everything he does is research based," she said. "I just really respect that perspective."

When asked what she would say to Biden if she had another chance, Moore said she isn't interested.