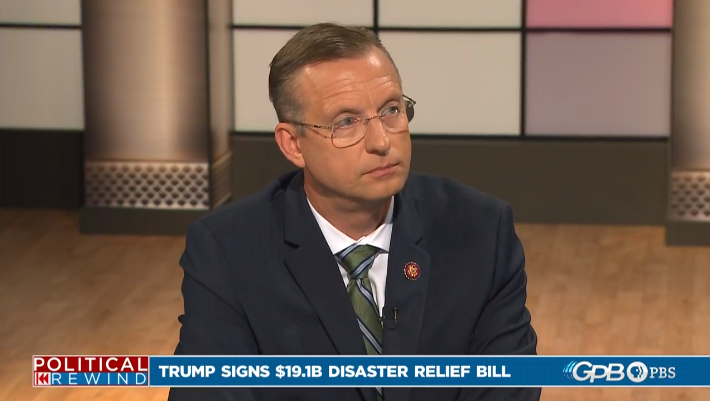 Georgia Congressman Doug Collins has officially launched his campaign for U.S. Senate, opening a rift in the Republican party that adds another layer of intrigue to an already contentious 2020 election cycle in Georgia.

Speaking on “Fox and Friends” from Atlanta, the Gainesville Republican said that it was time to take his message to a bigger stage.

“Well I think what we’ve done is proven what we can do in the House and take this message to the entire state of Georgia,” he said. “Georgia is a state that is a wonderful state that’s growing and has a lot of new ideas and new people coming in – they need to see the conservative values that actually believe in people.”

But Collins is not the only Republican on the ballot in the special election to finish the rest of retired Sen. Johnny Isakson’s term. That seat is currently held by Kelly Loeffler, a wealthy Atlanta financial services executive tapped by Gov. Brian Kemp after a lengthy search process.

MORE: Raphael Warnock Is Running For US Senate

President Donald Trump had privately urged Kemp to select Collins, and much of Loeffler’s first weeks in office have been spent trying to burnish her conservative credentials and showcase support for the president.

Loeffler has pledged to spend millions of her own money to keep the seat in Republican control, an attractive proposition to stave off surging Democratic organizing in Georgia and boost other candidates up and down the ballot.

The format of the special election features every candidate from every party on the same ballot, and if no candidate earns more than 50% of the votes, the top two vote-getters regardless of party move on to a January runoff.

But in the Georgia state House allies of Collins, a former Georgie state representative himself, are seeking to change the rules of the election to create a special primary election that would bring a showdown between candidates in May that would minimize intraparty fighting and help Collins’ chances.

That bill, HB 757, has been fast-tracked through the legislative process and could face a full House vote today.

The measure features surprising support from Democrats in the legislature, who see a special primary as the best way to coalesce support around a single candidate as the best shot to win outright in both U.S. Senate races in November.

His entry to the race has been met with resistance.

Kemp’s office issued a scathing rebuke of the proposal earlier this week, threatening to “veto any bill that attempts to undermine the rule of law for perceived political gain.”

The Democratic Party of Georgia weighed in Wednesday as well.

“This is the last thing Republicans wanted and they owe it all to a questionable appointment of a mega-donor with ethical issues that’s sparked an expensive and divisive intra-party fight at a time when the GOP can least afford it,” spokesman Alex Floyd said. “The fact is Georgians can’t trust Kelly Loeffler or Doug Collins to stand up for pre-existing conditions protections, reject corporate tax cuts that threaten Medicare and Social Security, and be the independent voice Georgia needs.”

Every state and federal lawmaker in Georgia will be on the ballot in November.