Amid 3 North Georgia Arrests, The State Of White Supremacy In The U.S. 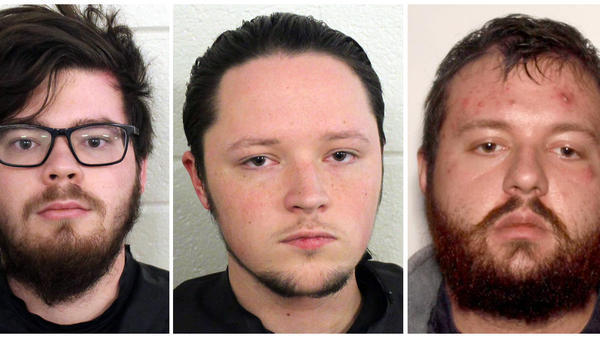 From left: Luke Austin Lane, Jacob Kaderli and Michael Helterbrand are accused of plotting "to overthrow the government and murder a Bartow County couple," according to police in Floyd County, Ga. / AP

Last week, federal agents arrested seven suspected members of the white supremacist group “The Base.” Among the suspects, three men from North Georgia — Dacula, Dalton and Silver Creek — were allegedly planning to kill a Bartow County couple and preparing for a race war.

The arrests expose a new front in violent extremism. Law enforcement is adapting to new domestic terrorist methods, and they consider small clusters of cells united by a larger group or ideology to be an expanding threat. "On Second Thought" host Virginia Prescott speaks with John Bailey and Joanna Mendelson.

The emergence of these cells comes as analysts note an increase in hate crimes across the country, and fear a continued surge in 2020.

To get a better sense of extremism and the response from law enforcement, On Second Thought spoke with John Bailey, executive editor at the Rome News–Tribune who has been covering the story. Joanna Mendelson, senior investigative researcher and director of special projects at the Anti-Defamation League’s Center on Extremism, also joined the conversation.

“‘The Base’ translates in Arabic to al-Qaida,” Mendelson explained. “There are certainly references to the tactics and results of their terrorist acts. But [the leader of ‘The Base’] is very clear to say that although they do take notes, although they do take lessons from these terrorist group abroad, that they should not collaborate with these other ideologies.”