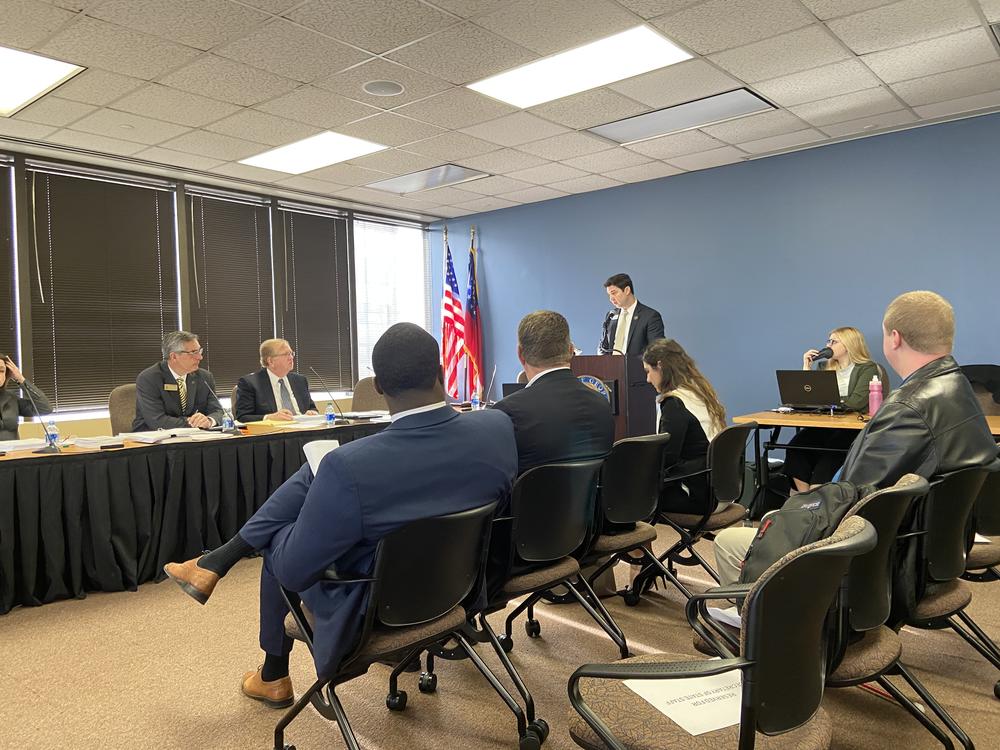 General Counsel Ryan Germany with the secretary of state's office presents proposed rules to the State Election Board.

A new rule passed Wednesday by the State Election Board will require poll workers to remind voters to review their paper ballots before casting them. The directive is one of many proposed rules that will govern the new ballot-marking device voting system being rolled out statewide.

The changes address issues ranging from early voting to absentee ballots, Republican Secretary of State Brad Raffensperger said, adding that many of them would be amended to incorporate feedback given by public commenters and other voting rights groups.

The first major test of the state’s $104 million touchscreen ballot-marking device voting system is less than two months away, and one of the biggest discussion points was around a proposed rule governing how many voting machines counties had to set up in each polling place.

Cobb County Elections Director Janine Eveler told the board that local elections officials had concerns about how the board would interpret the rule requiring counties to have one machine for every 250 electors in a precinct.

The way the initial proposal read, counties would have to add the number of voting machines available during the final day of early voting to the number assigned to polling places on Election Day to meet the 1/250 threshold.

That could lead to counties having a shortage of machines and longer lines during a crucial election year. Eveler said more consideration should be given to how much early voting occurs and adjust accordingly.

“Different election types have different turnout, and I can appreciate the desire for what legislature was trying to do… to have the maximum number of units out there that we could,” she said. “But for instance, in the presidential primaries, Cobb County has never had more than a 48% turnout and 8% of that was early voting.”

Ryan Germany, general counsel for the secretary of state’s office, said that the average voting precinct in the state contains 2,500 registered voters and that a longer-term solution would require the legislature to change the Georgia state code.

After further discussion, an amended proposal would seek to subtract the number of people who cast ballots during early voting from the number of voters that count toward divvying up machines on Election Day. That will be posted for public comment and voted on next month.

During an hourlong public comment period, Georgia voters and representatives from advocacy groups expressed concern with the proposed rules and the implementation of the new voting machines.

Several visually-impaired voters told the board they were concerned with the accessibility of the system, specifically after the ballot is cast and before it is inserted into the scanner.

Marcia Robinson with the National Federation of the Blind of Georgia said she tested the machines when the state was considering what vendor to choose. A primary concern she had both then and now is making sure visually-impaired people can review their ballot selections once they are printed out.

A rule proposed Wednesday would allow those people to use a phone, tablet or other technology to help read the ballot, but Robinson said that doesn’t cover everyone’s needs.

“I appreciate the fact that you are looking at ways to use new measures,” she said. “However, we have many people that are blind or visually impaired who do not use smartphones, who do not have an app on their phones... some of them still use flip phones.”

The secretary of state’s office faces a tight deadline to implement more than 33,000 touchscreen voting machines to all 159 counties in time for officials to test the equipment, send out absentee ballots and make other preparations to run the March 24 presidential preference primary.

Wednesday on Political Rewind , we are joined by the Secretary of State Brad Raffensperger to discuss the unfolding primary in Georgia. How have social...