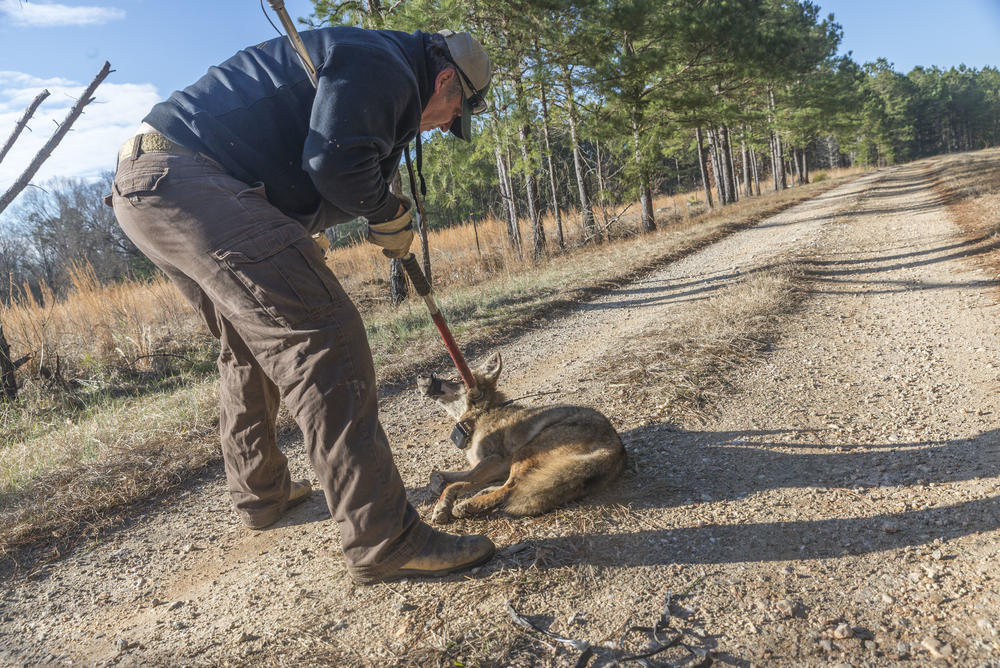 In 2015, Trapper Dan Eaton prepares to release a female coyote, wearing a GPS tracking collar, after working with scientists to include her in a three year study of coyotes in the Deep South. / GPB

Three years ago, a coyote with ice blue eyes lay stock still as scientists took her blood, weighed her, and fixed a GPS collar around her neck on a dirt road next to a field near Augusta.

The scientists were from the University of Georgia’s Warnell School of Forestry and they were working with this coyote to add her to what would be the largest study of coyotes in the South. For the next two years, scientists followed animals like her across hunks of Alabama, Georgia and South Carolina in order to answer some questions they had about how coyotes have become so ubiquitous across the region. Michael Chamberlain, lead scientist on the study, already knew some things.

“Well for one thing, coyotes in the Southeast are relying more heavily on deer as prey than Western coyotes do,” Chamberlain said.

Deer hunters wanted to know more about that.  That’s why natural resources agencies from Alabama, Georgia and South Carolina helped pay for the study. Back then, as far as anyone could tell, the deer Southern coyotes ate were newborn fawns in the Spring and whatever they could scavenge during hunting season.  The coyotes in this new study showed Chamberlain something new.

“By and far white tailed deer were the most important prey resource for resident coyotes,” Chamberlain said of the study results. And this wasn’t just in hunting season, either. “The constant consistent use of adults throughout the year is something you can't just describe a way to scavenging.”

Southern coyotes simply hunt deer. That's not the news human hunters wanted, but there’s no love lost. Already Georgia hunters kill about 40,000 coyotes annually and the state is in the second year of a bounty contest. Even so, the effect on the coyote population is negligible. The population is stable, maybe growing.  To understand why, you need to understand the other key finding of the study.

“What we've ended up figuring out is is there really are two types of coyotes,” Michael Chamberlain said.

There are resident coyotes, perhaps a quarter million strong in Georgia. Those are mated pairs on territories of about 10 square miles that typically have farmland and hedgerows and maybe some forest. The typical rural, Southern, manmade landscape.

“Imagine a puzzle with pieces that don't fit tightly together and the puzzle pieces are these resident territories,” Chamberlain said.

In the deep, wet woods you see the big shift to deer hunting, otherwise they stick to small animals like rabbits. Residents avoid people. Then there are the other coyotes.

“There are these transient animals which are somewhat nomadic. They don't maintain space,” Chamberlain said.

Transients are young animals just leaving home or maybe formerly resident animals who lost their mate. There’s something like 90,000 of them in Georgia.

Transients move in the space between the puzzle pieces. Those are power line cuts, highways, neighborhoods and cities. These are very human places through which transients move 60, 70 sometimes 100 miles at a time.

And so when a resident coyote dies, there’s a transient coyote in the wings who hops into the resident's puzzle piece and takes it for their own.

“It essentially means that you need to put a 50 to 70 square mile circle around your property and recognize that that's what you're actually managing,” Chamberlain said by way of advice to owners of hunting land.

It makes coyote management feel like a game of whack-a-mole. Charlie Killmaster, lead deer biologist for the Georgia Department of Natural Resources agreed.

Killmaster said you have to think bigger than your hunting club, like statewide bigger, hence the open season on coyotes in Georgia. But ironically, Killmaster said shooting every coyote on sight doesn’t accomplish much.

“Indiscriminate coyote harvest is not really that effective for improving things for wildlife,” he said.

Instead, a landowner should do their homework, really target the animal that is causing you trouble. Even then, the effects of more discriminate trapping are short lived given the resident/transient relationship.  Chris Mowry is an associate professor of biology at Berry College and a founder of the Atlanta Coyote Project. He asked once you understand that dynamic, why kill coyotes at all?

“We just sort of feel like lethal management is futile,” Mowry said. “There are other alternatives.”

Which brings us to what Michael Chamberlain says is the next question in the research.

“It’s to try to understand whether we can alter the landscape in a way that benefits species we are interested in at the detriment of the coyotes ability to prey on those species,” Chamberlain said.

So even as our knowledge of how coyotes came to live near us has grown, we're still figuring out how to live with them. 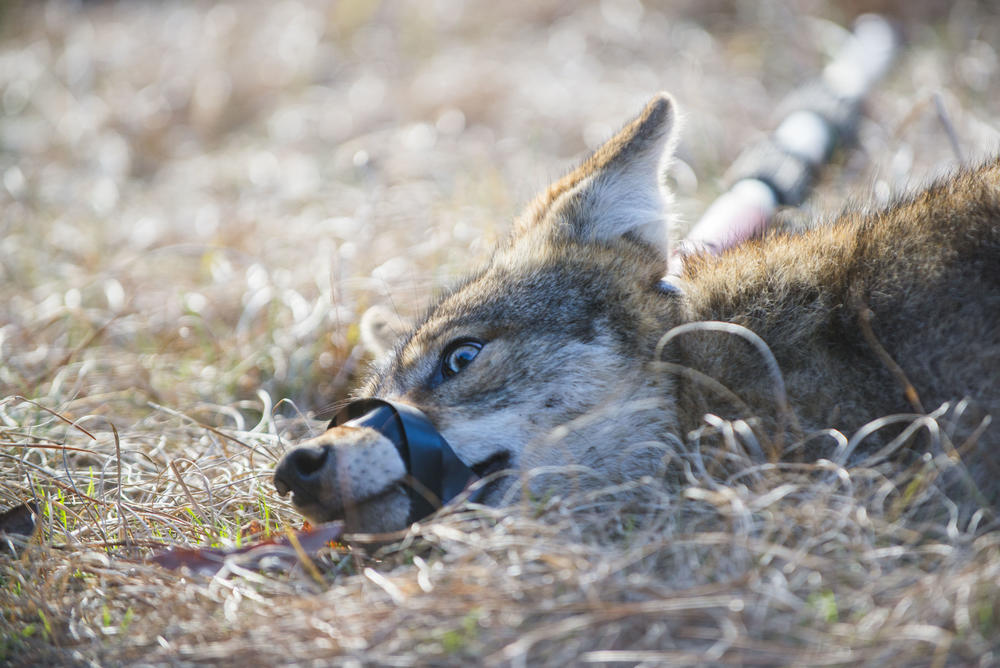 A female coyote, placid and still as scientists measure her and take biological samples in 2015. / GPB 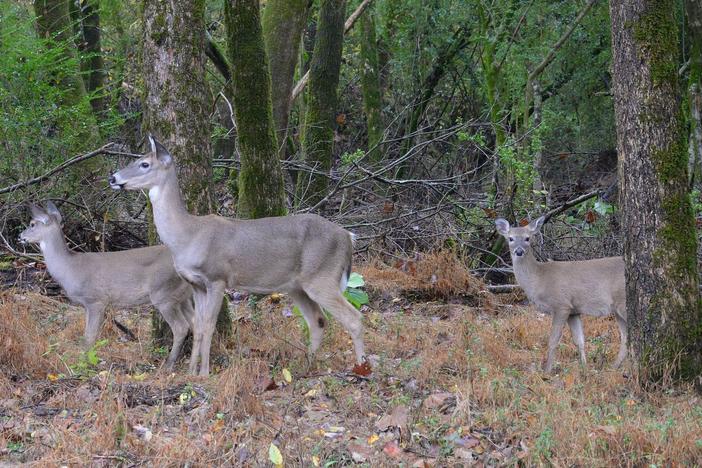 Georgia deer hunters are helping to feed families in need. The Georgia Wildlife Federation’s Hunters for the Hungry program contracts with meat... 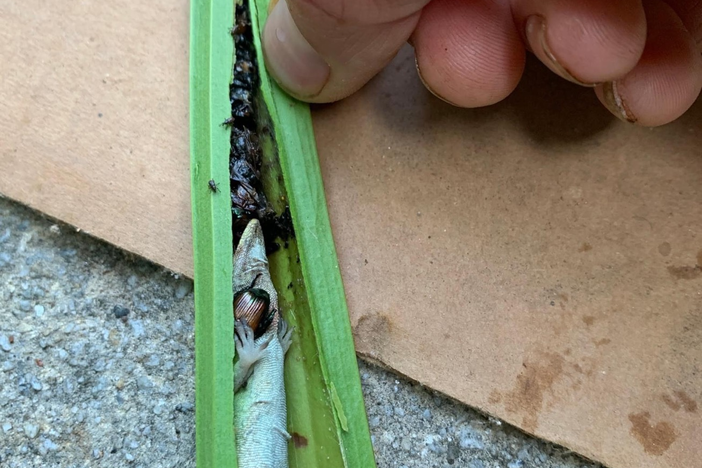 One of Georgia’s notorious meat-eating plants surprised a group of elementary school students by revealing its last meal — a lizard. 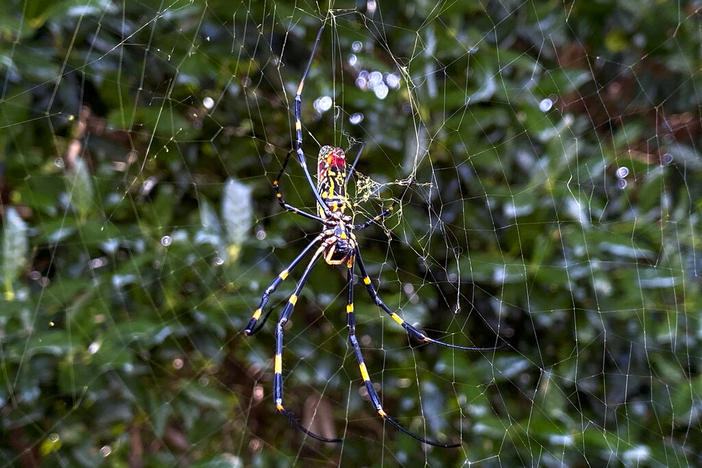 How do Joro spiders impact the ecosystem? UGA researchers hope to find out — maybe with your help

Not much is known about the invasive yellow and black East Asian spider, but some researchers have noticed fewer sightings of native spiders since the Joro arrived in North America roughly eight or nine years ago.