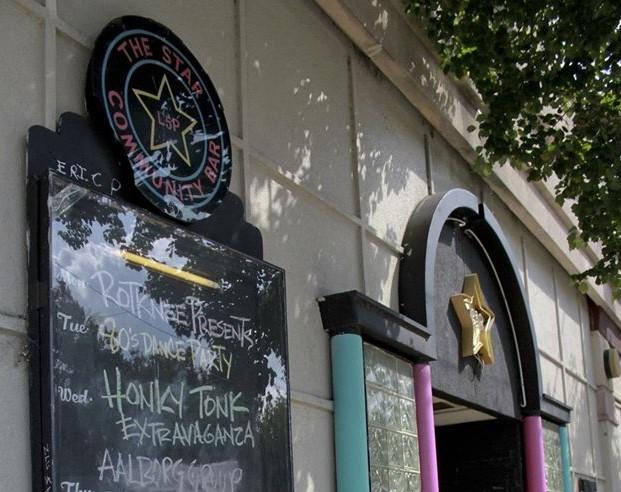 Caption
The outside of Star Bar Atlanta in 2015. The music venue announced Tuesday Dec. 31 that it will close after the New Year's Eve show.

An iconic Atlanta landmark is closing its doors after Tuesday's New Year's Eve celebration. Management for the Star Bar in Little 5 Points said their landlord has given them 11 days to vacate the premises but they will close before then.

"The landlord has decided to rent the space to someone else, giving our employees 5 days to find new jobs," owner Kahle Davis said in a now-deleted Facebook post.

Davis took over ownership of Star Bar in September 2013, purchasing the location from Hudmac, LLC members Jack and Stephen Hudnall, and Stephen Tally, who continued to run the Tin Roof Cantina near Buckhead, according to Creative Loafing.

When reached for comment, David told GPB News, "I have eleven hours to clean out my office and preserve financial documents."

He asked to reconnect for an official comment Wednesday.

The closing comes on the heels of the former Masquerade music venue site suffering a partial building collapse. The DuPre Excelsior Mill is an historic building with a storied past in Atlanta's music history.

The news of Star Bar closing only added more fuel to the anger locals feel about the changing city landscape.

John Breedlove, who has played Star Bar with several acts, said he was incredibly upset to hear the news Thursday. His band Hip to Death played the venue with Glen Iris in September 2017.  Before that, Breedlove played Star Bar more that 10 times in the span of a year, he said.

"Playing with Dasher, Predator, Twin Trances, Black Linen, a couple Corndogoramas; we played the first Little 5 Fest there," Breedlove said. "Just a lot of memories. Just horrible it is going to be gone."

He said he started playing shows in Atlanta in the 2000s and remembers Lenny's Bar, which closed in 2010.

"When [Lenny's] closed it took half my heart with me," Breedlove said. "Started playing the Earl, Atlanta Icehouse, house shows, Drunken Unicorn, Wonderoot. The first time I ever played out in Atlanta was The Masquerade in Heaven in 2005. Sucks that they are bulldozing it. It is a part of Atlanta history. Developers are so damn careless."

Breedlove isn't the only one who feels like "Atlanta is dying" and the city is becoming stale for musicians.

"I think the Star Bar closing is the nail in the coffin for L5P's punk rock mystique and a blow for the music of that scene since now all that is left is the Earl, 529 and the Highlander," Wil Cifer of Atlanta said. "Smith's [Olde Bar] is really just frat rock and not metal or punk. The bright side is the cliques who held court there since the '90s are now displaced to the Highlander so perhaps it might shake things up as there is a more experiemental vibe to the indie rock bands who typically play the Earl."

Amber Taylor, an Atlanta-based musician, said the history of that part of town goes back to the construction of Freedom Parkway and the proposed Ga. 285 loop itself.

"They were going to knock down parts of Little 5 to build a freeway on-ramp but the residents protesting the state's project stopped it," Taylor said. "If that strip is going to be razed or altered, that's a huge fail of our city. People went to jail to protest the freeway, which saved parts of Little 5."

Taylor said she lives on Langhorn Street and that it was widened for the same inner loop freeway, "but was abandond because of the citizens' push back."

Bill Johnston said the space is an institution and a staple of the music scene.

"All the locals who have been here forever are being priced out by yuppies and developers," Johnston said. "The local culture is being forced out for profits."

In the Facebook post comments, Davis said the landlord plans to have a new tenant with a liquor license in the space on Moreland Avenue within two weeks.

"As a musician it is definitely the place to be able to play to establish yourself on the Atlanta music scene," Arrington said. "I wonder what venue will there be for those who love music and seeing local and authentic music live."

That's the question on many locals' minds as they bid farewell to 2019 and look toward 2020. 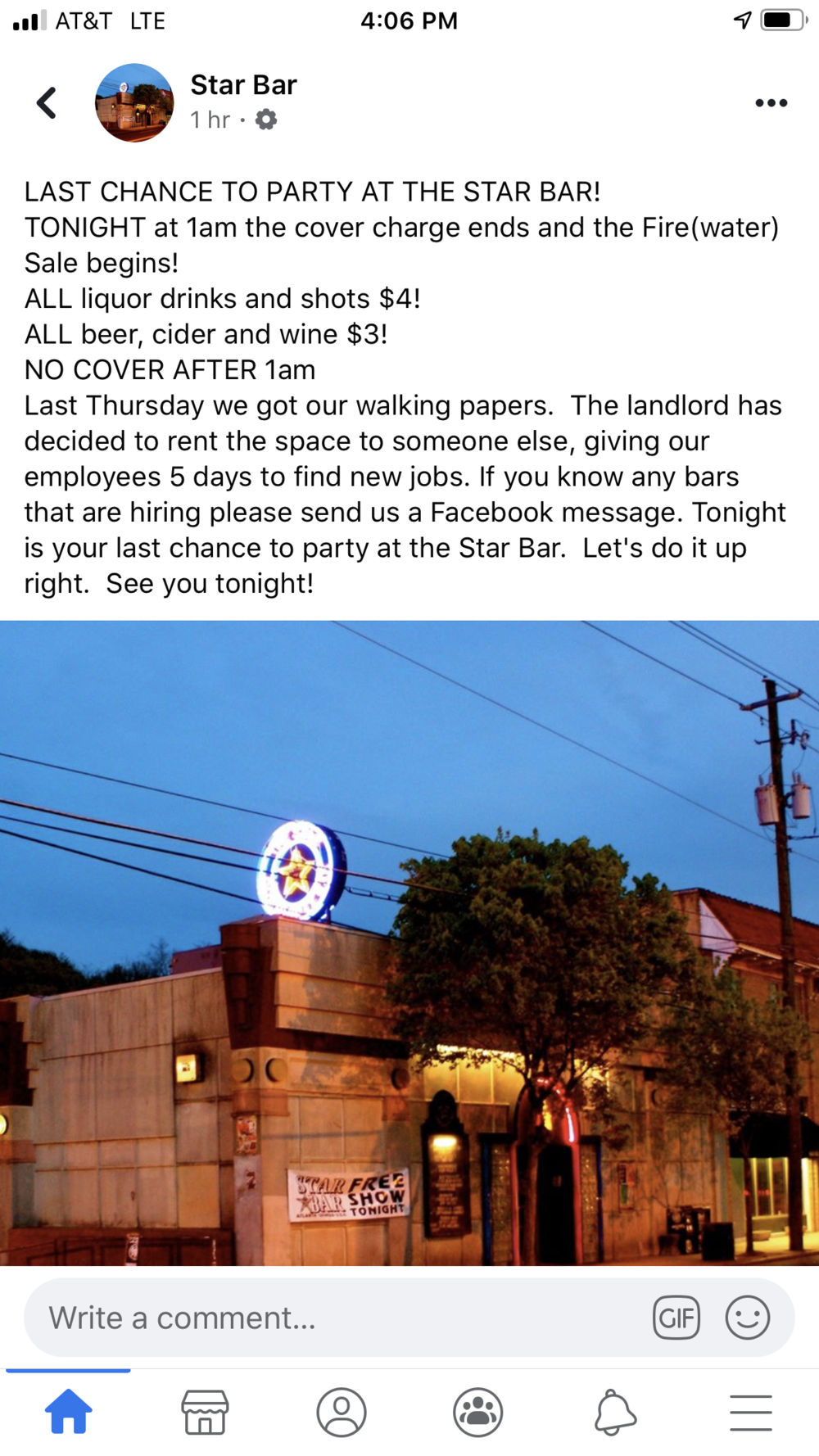 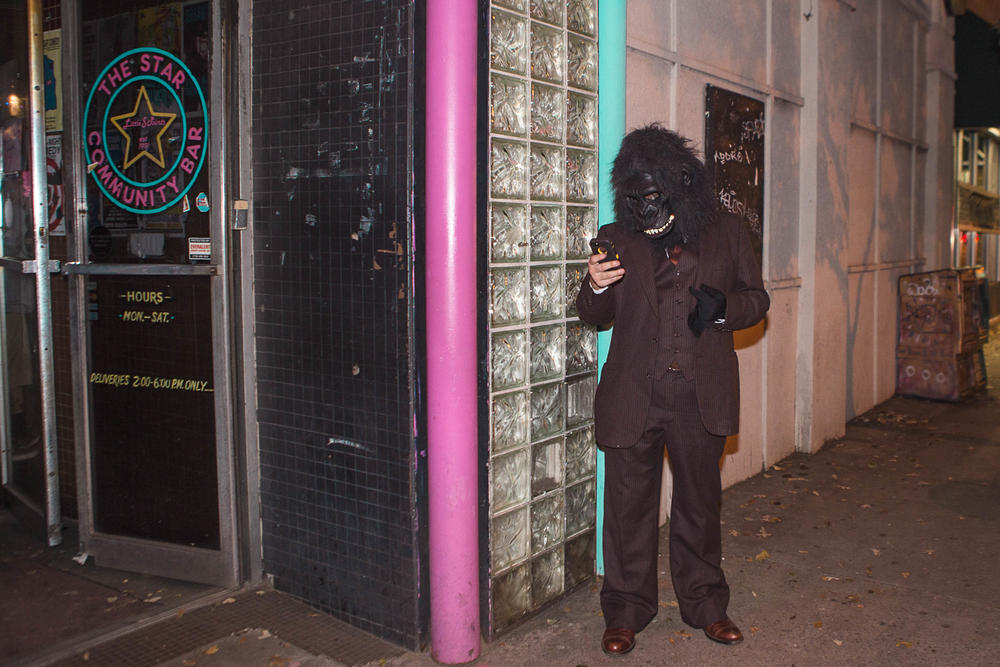 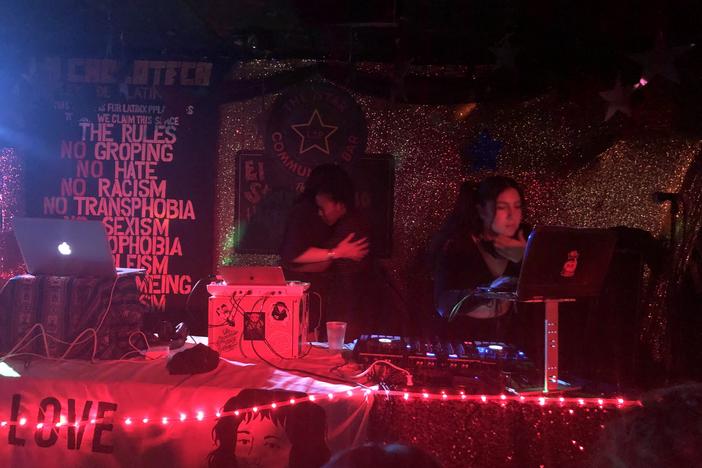 La Choloteca is not just any dance party. What began as a simple idea between friends in late 2016 has grown into a monthly gathering spot for Georgia's...