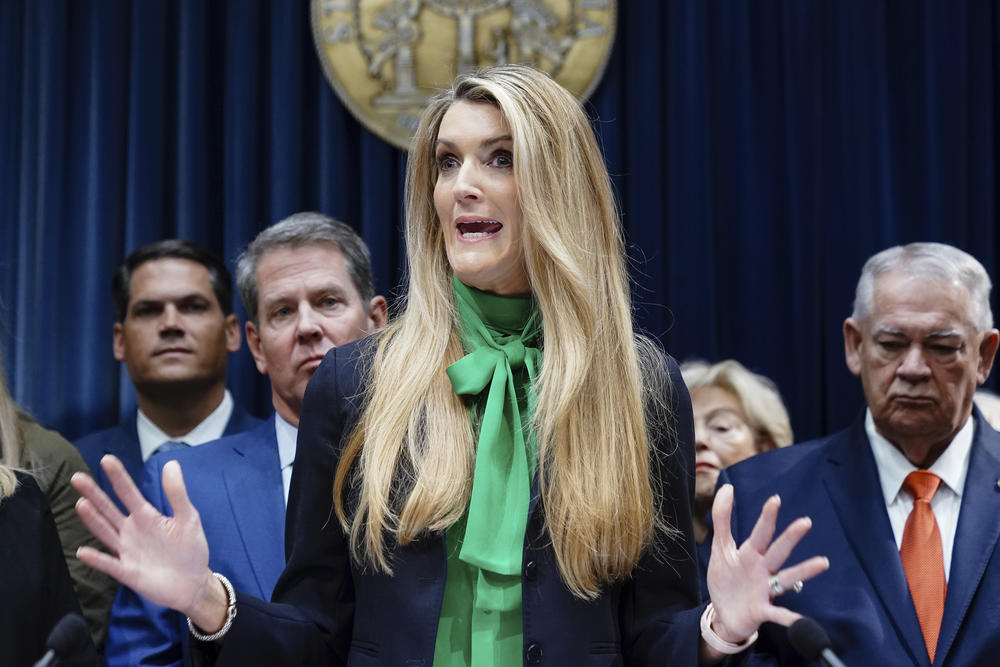 Businesswoman Kelly Loeffler speaks after she was introduced by Georgia Gov. Brian Kemp as his pick to fill Georgia's vacant U.S. Senate seat at the Georgia State Capitol on Wednesday, Dec. 4, 2019, in Atlanta. / AP

Gov. Brian Kemp on Wednesday named Atlanta businesswoman Kelly Loeffler as Georgia’s next U.S. Senator as the Republican party in Georgia seeks to maintain control of two Senate seats, the state House and its presidential vote heading into the 2020 election cycle.

Loeffler will be the second-ever woman to represent Georgia in the Senate, and, if she wins a special election next fall, she will be the first Georgia woman elected to the Senate. In her remarks, she acknowledged that it will take work for her become known to voters in Georgia.

“But here’s what folks are gonna find out about me: I’m a lifelong conservative, pro-Second Amendment, pro-military, pro-wall and pro-Trump,” she said. “And I make no apologies for my conservative values, and will proudly support President Trump’s conservative judges.”

It’s been three months since Johnny Isakson announced he would step down from office at the end of 2019 due to health concerns.

In that time, Kemp asked for input from interested parties through a public application portal and sought to develop a shortlist of applicants that would reflect his commitment to appointing people of diverse and non-traditional backgrounds to government posts.

With that criteria in mind (and the eleventh-hour submission of her application), Kemp’s selection of Loeffler largely reflects his first-year message that has largely steered policy decisions through the lens of Georgia’s strong economy.

She co-owns the Atlanta Dream WNBA basketball team and is the CEO of Bakkt, a bitcoin futures trading company that is a subsidiary of Intercontinental Exchange, itself a financial giant that owns the New York Stock Exchange and is run by her husband, Jeff Sprecher.

Loeffler does not have much of an established political footprint outside of her considerable campaign contributions over the years to national Republicans such as Mitt Romney and Paul Ryan, local politicians such as former Democratic Atlanta Mayor Kasim Reed, former Republican Gov. Nathan Deal and checks written to the Georgia Republican Party and Republican National Committee.

In a 2013 speech to the Georgia Federation of Republican Women, Loeffler detailed her life’s path from working on her family’s soybean farm and waitressing to working in international finance, and said she was guided by conservative values.

“We need to get back to Constitutional common-sense ideals, like limited government, lower spending, less regulation, a strong national defense to support security and freedom and religious freedom, the basic tenets that made our country great,” she said. “These are Republican values, these are things that made a difference in my life.”

Loeffler also said that “If our country is to embrace conservative values that made America great, women must play a huge role in that dialogue.”

Her appointment is an acknowledgement by the governor that suburban voters – particularly women – will be an important coalition to court in a contentious 2020 campaign that could decide control of everything from the state House to the White House that features demographically and politically shifting electorate.

“Contrary to what you see in the media, not every strong woman in America is a liberal,” she said at the Capitol Wednesday. “Many of us are conservatives and proud of it.”

It is highly likely that both the Republican and Democratic nominees in the 6th and 7th Congressional District races will be women, and two of the four Democrats vying to challenge Sen. David Perdue are women as well.

Loeffler can also self-fund her effort to hold onto the seat, which will be an asset for a campaign that could see three elections within a two-year span.

She will have to run in an open “jungle primary” special election on next November’s ballot, and if no candidate gets a majority of the votes then the top two finishers regardless of party advance to a January 2021 runoff.

If she wins that election, Loeffler would have to stand for re-election at the end of the term in 2022, the same time Kemp would run for his second term.

In addition to jumping in to a Senate that seems likely to hold a trial for articles of impeachment early next year, Loeffler will have to answer criticism from both sides of the aisle about her selection.

Democratic Party of Georgia chairwoman and state Sen. Nikema Williams said in a statement that Loeffler would not be an independent voice for Georgians and will “fall in line with Donald Trump, David Perdue and today’s Republican Party.”

“Today’s appointment showcases exactly where Brian Kemp’s and Georgia Republicans’ priorities lie: with their own special interests, instead of the people of Georgia,” she said. “After a reckless process where political games were put ahead of the public good, Kemp chose one of his own donors who will be nothing but a rubber stamp for today’s GOP agenda.”

But Trump and other conservative voices expressed reservations about her appointment.

The president privately urged Kemp to select Gainesville Rep. Doug Collins, while other allies were more vocal in their insistence.

Florida Rep. Matt Gaetz engaged in a Twitter spat with top Kemp deputies over the Thanksgiving weekend after he castigated the governor for not following Trump’s wishes, and media personality Sean Hannity bemoaned the betrayal of the president’s advice and urged followers to flood the phone lines in support of Collins.

Collins has indicated he might still run for the Senate seat next year, but will not rush to make a decision any time soon.

Thanks to caucus rule changes passed by House Republicans in 2018, he might have to step down as ranking member of the House Judiciary Committee to run for higher office, something he’s unlikely to do amidst the committee’s role in the ongoing impeachment inquiry.

Loeffler’s remarks seemed to silence some of those voices questioning her ideological alignment: she mentioned her pro-life views, decried the “impeachment circus” and mocked “socialist ideas” of leading Democratic presidential candidates.

“This is the fight of our generation, and it’s why I’m here,” she said. “As an outsider to Washington, I know I will have to prove it: to earn your confidence and support, with my votes, my priorities, and my actions, and that’s exactly what I’ll do.”

She’ll have some help. The National Senatorial Republican Committee said it will treat her as an incumbent and provide resources toward her special election run.

Gov. Brian Kemp has a big decision to make: who will be Georgia’s next U.S. Senator? The first-term Republican has leaned towards Kelly Loeffler, an...