Grady's Stroke Ambulance Can Scan For Stroke, Give Medicine On The Side Of A Highway 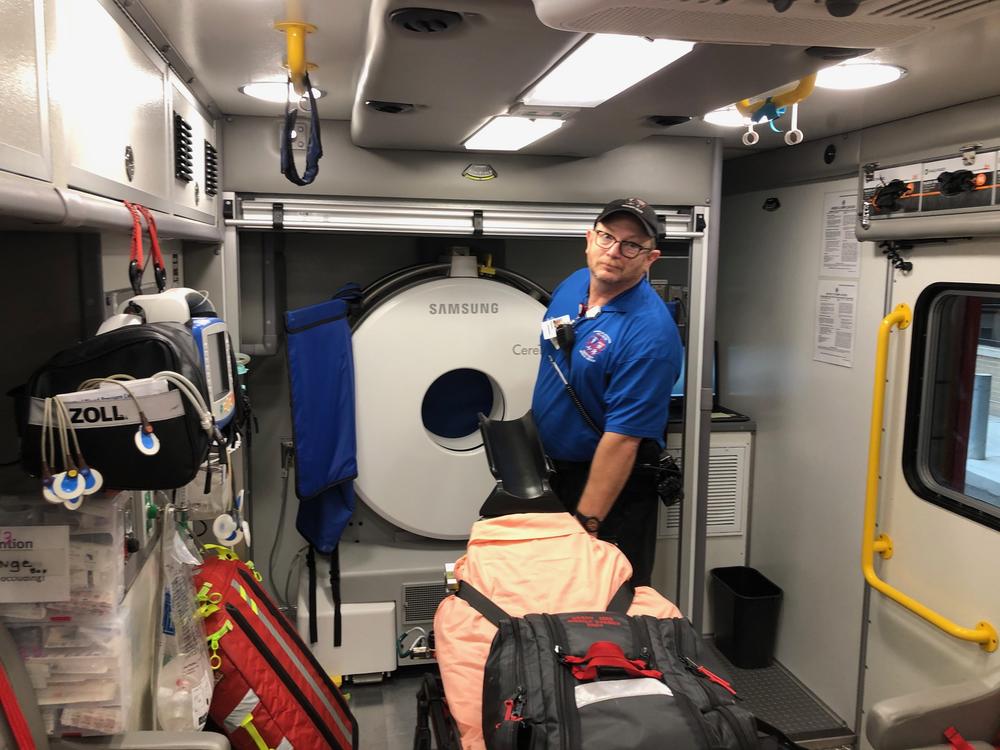 Grady Bagley adjusts the stretcher in the mobile stroke ambulance that runs at Grady Memorial Hospital as part of the Marcus Stroke and Neuroscience Center. / GPB News

Carol Fleming remembers a stroke patient who tried to drive herself to the hospital during morning rush hour traffic in Atlanta.

"As she was driving, she was becoming more confused and not thinking clearly," Fleming said. "She did decide to pull off on the side of the road and call 911."

Fleming runs the Mobile Stroke Unit at Grady Memorial Hospital. That unit was the first to arrive. The crew on board the ambulance helped the woman who was having a stroke right there on the side of I-85.Georgia, like the rest of the South, has a a very high rate of stroke. Strokes kill thousands of people every year in the state. And even when stroke victims don’t die, they can be left with profound disabilities. But now a new type of ambulance has been cutting the time it takes to get medical help to stroke victims. GPB’s Ellen Eldridge reports.

Dr. Michael Frankel, the director of the Marcus Stroke and Neuroscience Center at Grady Memorial Hospital, said the mobile unit has many of the same special diagnostic tools that the Marcus Center does.

"The mobile stroke unit is a specialized ambulance that has a CT scanner inside it, as well as a two-way video connection so that we can see patients in real time and evaluate them," Frankel said. "The purpose of the mobile stroke unit is to rapidly determine whether someone's having a stroke in the pre-hospital setting before they come to the hospital."

Because time is the enemy when you’re having a stroke.

The mobile stroke unit allowed EMS workers to scan the woman’s brain on the side of the highway as traffic crept by. That was just one of the 880 calls the unit made in its first year.

Fleming said the ambulance crew works from 8 a.m. to 8 p.m. because research shows most strokes happen during the day.

"We are dispatched initially through Atlanta 911," she said. "When a 911 call comes into Atlanta, Fulton County in particular, it is routed to Grady EMS if it's medical and then, of course, to fire or police."

The Marcus Stroke Network added the ambulance with part of a $15 million gift from the Marcus Foundation in an initiative that brings together the resources of the Grady Health System, Emory University School of Medicine, Boca Raton Regional Hospital and the American Heart Association/American Stroke Association, "to help reduce stroke disability and death rates in the Southeastern United States."

For now, the special stroke ambulance can only respond inside Fulton County.

When stroke victims do not get prompt medical attention the consequences are serious, Frankel said.

"Paralysis on one side of the body and difficulty speaking are common stroke symptoms," he said. "As long as that artery in the brain is blocked, the longer it's blocked, the more likely there is to be permanent damage and that will limit the potential for recovery."

That’s why the stroke ambulance also keeps a clot-busting drug called Altaplase onboard.

"The faster we can give the drug and the earlier we give it after someone starts having stroke symptoms, the better the drug works," Frankel said. And the more quickly they get it the better their chances are to literally walk away from their stroke.

Georgia is in the nation’s so-called “Stroke Belt” and stroke is the fourth leading cause of death in the state, according to the Georgia Department of Public Health. Survivors are often left with disabilities such as paralysis. About 85% of strokes are caused by blocked arteries, Frankel said.

The ambulance takes stroke victims to the Marcus Stroke and Neuroscience Center where there is an intensive care unit for patients with neurological problems.

About 50 to 60 patients stay in the hospital where two angiogram suites allow doctors to perform thrombectomies. That means a catheter is used to get to the artery without opening the skull. It’s similar to how doctors treat blocked arteries in the heart, Frankel said.

Even though the mobile ambulance only responds locally, rural parts of the state benefit from the team's expertise.

"We have a team of experts that are on call and respond to the mobile stroke unit when it is activated," Frankel said. "They are remotely located."

Because of the way technology has advanced, doctors can see the patient in real time with two-way video.

"We can ask questions of the patient," Frankel said. "We can facilitate a very fast examination."

And the Stroke Center partners with community hospitals throughout Georgia and Alabama, Fleming said.

"We're very excited about partnering with hospitals who are not a stroke center now and teaching them how to care for these patients," she said.

The Marcus Stroke Network plans to add another mobile ambulance soon. That means more people like the woman who called 911 on the side of the highway will get help faster when having a stroke.

She was treated and released without any disabilities after just a few days. 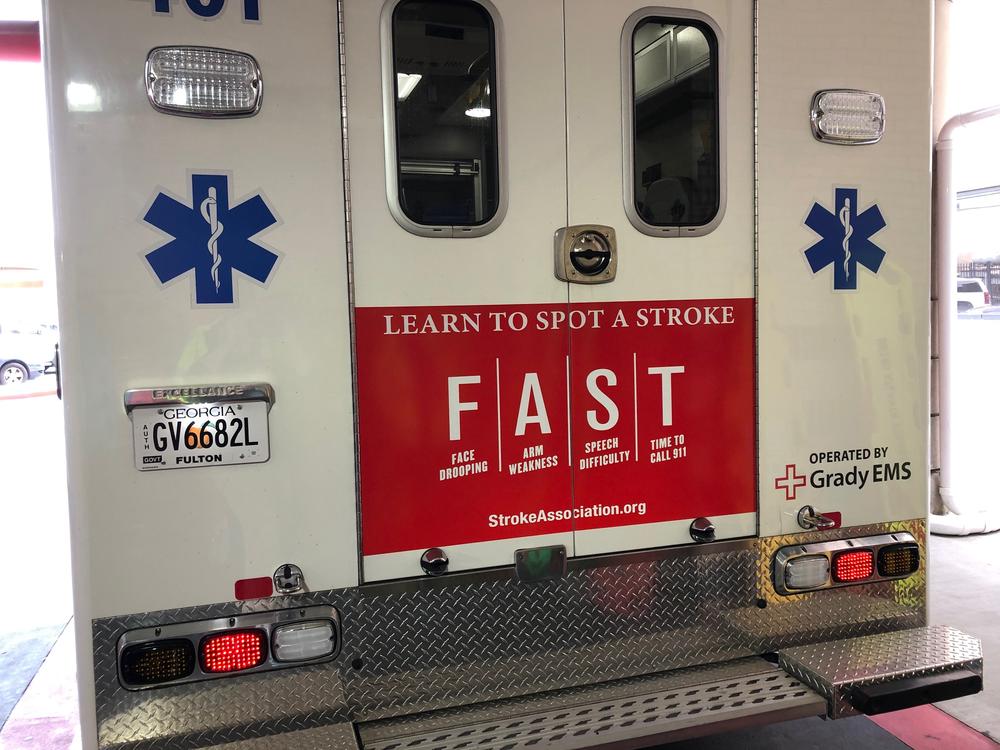 The back of the mobile stroke ambulance has the acronym FAST, which helps people remember the signs of stroke: Facial drooping, Arm weakness, Speech difficulty and Time to call 911. The unit was added to the Marcus Stroke and Neuroscience Center in 2018 and responded 880 times in its first year of operation. / GPB News 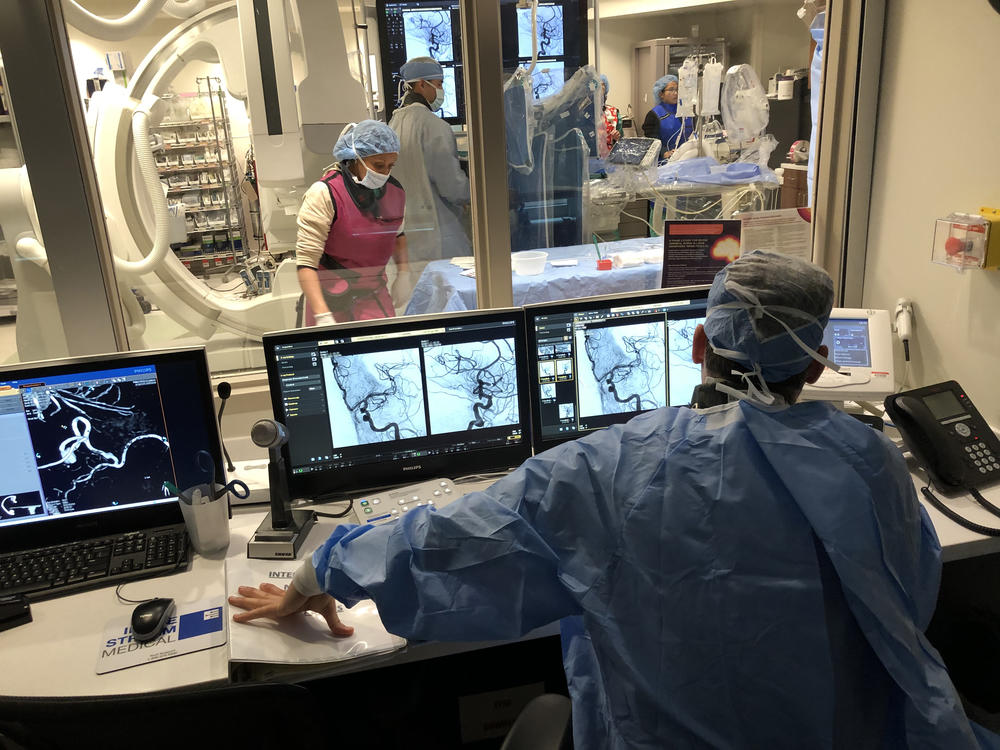 A patient undergoes a thrombectomy at the Marcus Stroke and Neuroscience Center at Grady Memorial Hospital in Atlanta. The procedure removes blood clots from arteries in the brain. / GPB News 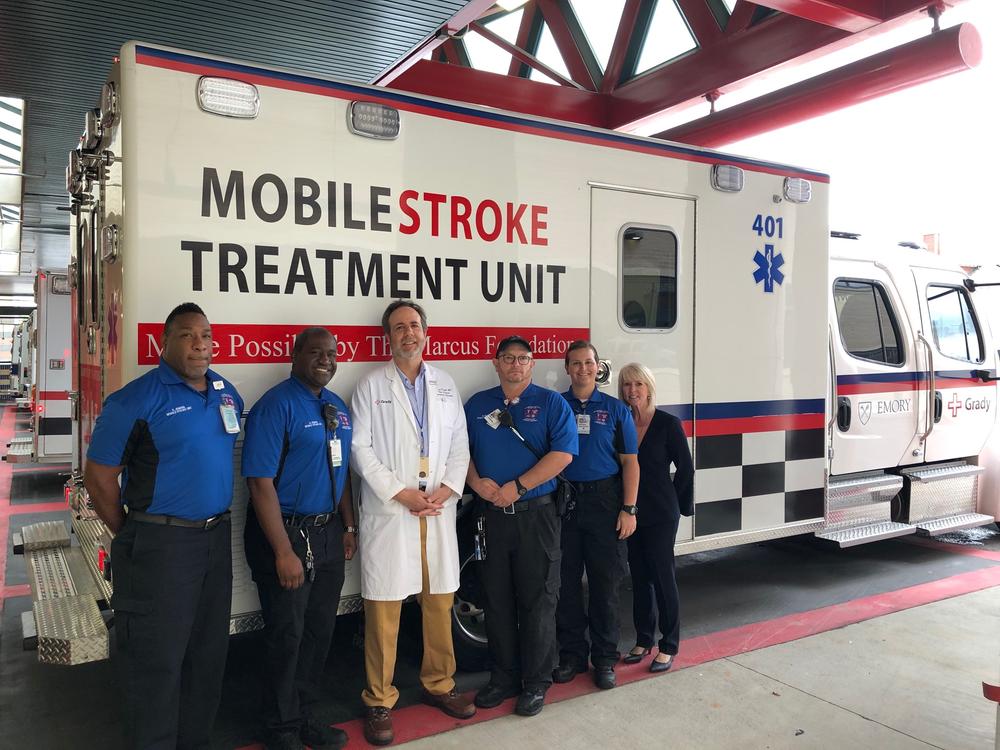 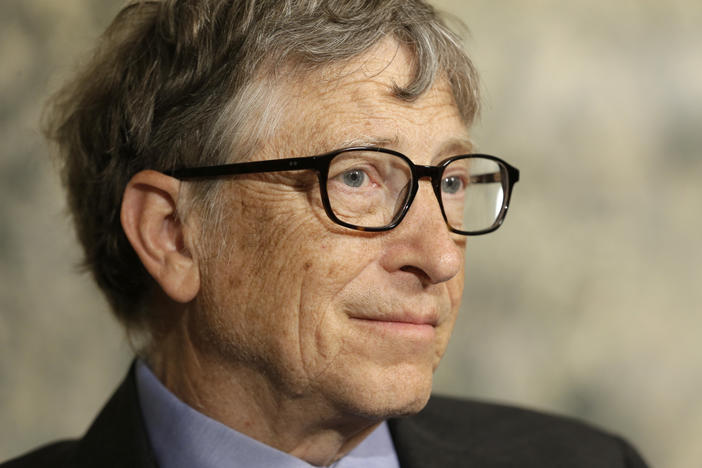