Elections officials say there were few hiccups in the pilot of the new $107 million touchscreen voting system that will be implemented statewide in the coming months.

Six counties piloted the Dominion ballot-marking devices that print out a paper record of your vote that is then inserted into a scanner for tabulation, and a seventh county tested hand-marked paper ballots as a backup system in case the BMDs are not ready in time.

At the Paulding County courthouse in Dallas, a steady stream of voters cast their ballots on the new machines with little issue.

Talmadge Scott Jr. has been voting in Georgia for more than 20 years. He said the BMD was easy to use, and he liked the paper component.

“I verified it and it was exactly what I put on the paper… I could look at it to show that’s what I had voted to make sure it was accurate,” he said. “Out of all my years of voting, this was a breeze.”

Paulding elections director Deidre Holden said one of the biggest challenges poll workers faced was making sure people knew what to do with the paper ballot after the machine was printed out.

“What we have to try to get them to understand is the vote is not cast on that ballot-marking device, it is not officially cast until they put it into the scanner.”

Holden said while the pilot was an overall success, there will still be a learning curve for poll workers and voters.

Elections officials across the state expressed similar sentiments, but the pilot was not completely problem-free.

Five of the counties experienced issues with the poll pads used to check voters into their polling place, and three of them had precincts stay open later to accommodate voters.

Speaking to GPB News outside the Dallas polling place, Secretary of State Brad Raffensperger said now is the time to work out the kinks – and to rely on strong training and communication.

“We didn’t want to swamp the boat, but we also didn’t want to have it in a county that had a municipal election that had a hundred people show up,” he said. “We wanted to have enough that we could actually have actionable intelligence to make sure we can fine-tune the process where it needs to be.”

Raffesperger’s office said that more than one in 10 votes cast during early voting were on the new BMDs and 117 of the state’s 159 counties have been trained on the new system.

One county over in Powder Springs, voters piloted a different type of election tech: hand-marked paper ballots that were then entered into a scanner.

Cobb County elections director Janine Eveler said things were smooth there, too, but there were some logistical things to consider when running a purely paper ballot election, like how to get ballots to the polling places.

“To send out all of the ballots that were printed for each polling place is too heavy for a poll manager to lift,” she said. “So we had to kind of decide, well, we're going to send out a certain number now and then we'll have more ready to go take it to them if they need it.”

Eveler said there were mostly positive reviews from voters, and added that voters had some creative ways to incorrectly fill in their choices.

“Sometimes they make an X, or a check …  something we’ve seen is where they mark a line through everyone they don’t want and circle the name they do want,” she said.

A federal judge ordered a pilot of hand-marked paper ballots as part of a larger lawsuit challenging the use of electronic voting machines. Judge Amy Totenberg said the state must stop using its current outdated direct-recording electronic machines after 2019.

Hand-marked paper ballots would be the system put in place if the BMDs are not ready in time.

But Raffensperger says the rollout of new machines are ahead of schedule and should be ready by mid-January. 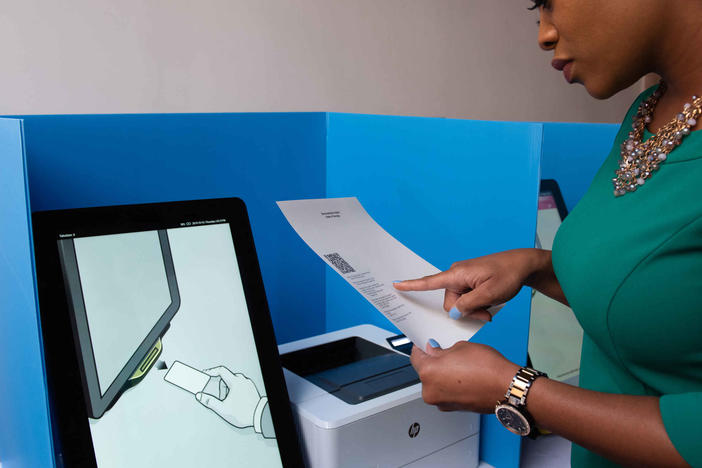 The Georgia Secretary of State’s office has unveiled a new education program to help voters acclimate to a new $104 million election system that prints...