Music As Medicine In The ICU 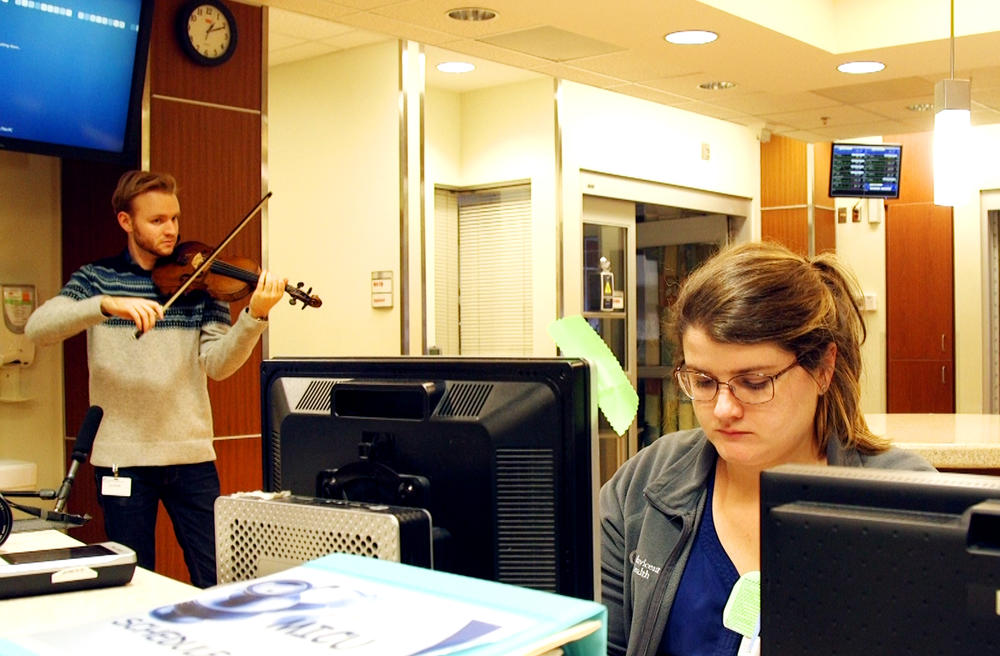 The intensive care unit at Navicent Health’s hospital in Macon is like ICUs everywhere. Nurses and doctors constantly checking in on the seriously ill, all the while trying to keep the noise down. But there’s one sound you can’t escape.

Music As Medicine In The ICU

Reichert says the beeps are important, of course, because they communicate the conditions of patients. She couldn’t do her job without them. But in terms of emotional wellbeing, the beeping can be tough.

“I get home at night it still beeps,” Reichert said.

That’s why it was a relief when violist Keoni Bolding of the McDuffie Center for Strings at Mercer University unpacked his instrument near one of the ICU nurse’s stations on a recent morning. After a quick tune up, Bolding, accompanied by piano music on a Bluetooth speaker, launched into a set of mostly Christmas favorites.

Bolding was invited to the ICU by Dr. Avinesh Bhar, one of ICU doctors. Bhar doesn’t play music himself.

“I play the radio,” Bhar said with a laugh. “I have a good app on my phone and that's about it.”

But about a year ago he recognized the value of having music in what can be an emotionally chilly place.

“It’s cold, it's very clinical,” Bhar said. “I felt the need that at least we needed to introduce the concept of something more human or humane in the ICU to kind of make it a softer environment.”

It’s not just that music on the ward feels nice, Bhar said. There’s science behind this, too.

One study showed that music before and after surgery was better at reducing anxiety than anti-anxiety medications. Studies suggest classical music works best here. For the elderly, playing the music they enjoyed in their youth has documented benefits.

“You release some delirium or episodes of confusion, because it’s something they can relate to,” Bhar said.

Studies suggest not all music is created equal for the purposes of intensive care. Jazz? It might require too much mental attention to be therapeutic. And heavy metal and techno can apparently cause heart arrhythmias in a clinical setting, so no turning it up to 11.

Dr. Bhar said musicians in the hallway are a nice start, but he’s not sure patients can hear it in every room.

“I think some of that ICU to have the facilities for that where music is piped in directly to patients’ bedside,” Bhar said.

That would allow more personal music choices, too.

Keoni Bolding played a set at either end of the ward so everyone could hear. Deneen Shuman was among those outside their loved ones rooms listening in.  Shuman shot video on her phone as Bolding played and sang along until Bolding finished "Silent Night" with a flourish. Then she checked to see how her father-in-law liked it.

“Oh, just to see the look on his face,” Shuman said through a few tears. “Music just makes your soul just sing.”

It turns out music can be good medicine, too.