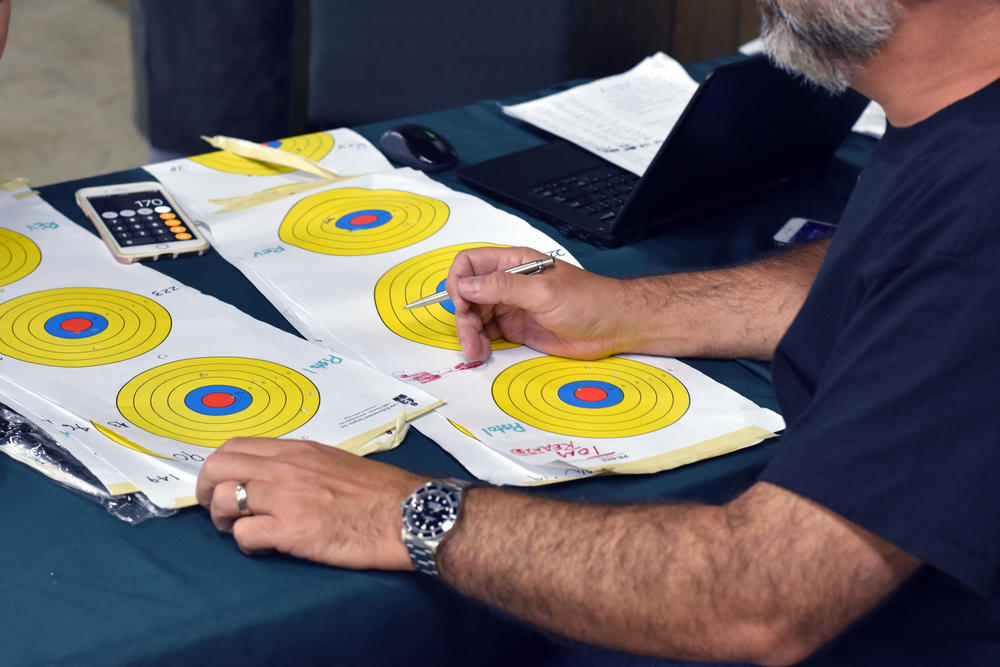 Two weeks after a pair of deadly mass shootings in Texas and Ohio left 31 dead, a longstanding fundraiser at a gun range outside of Atlanta drew criticism – and record crowds.

At the 11th District Republican Party’s fifth annual marksmanship and barbecue event, conversation centered on the feeling that responsible, law-abiding gun owners were getting a bad rap when it comes to talking about gun control.

More than 300 Republicans from the 11th Congressional District were mingling in a comfy Smyrna reception hall at Adventure Outdoors, the self-described “actual largest gun store in the world.”

For $45, a limited number of people could take a few shots at three targets using a rifle, pistol and revolver, or for $20 all could enjoy the barbecue reception. The keynote speakers were Republican U.S House Rep. Barry Loudermilk and National Rifle Association President Carolyn Meadows.

The percussive undercurrent to everything that night, from the Star-Spangled Banner to announcements about the dinner was a steady ‘thwack’ of gunfire from the 17-lane gun range below.

11th District GOP Chair Brad Carver told the crowd that the night’s attendance is the largest they’ve had in five years of holding the fundraiser, thanks to an unlikely source: state Sen. Jen Jordan (D-Atlanta).

“Thank you Sen. Jordan for tweeting this out and letting folks know about our range safety and responsible gun ownership event,” he said to a cheering crowd.

Jordan, who lives in the 11th District, criticized the event online for its timing, just two weeks after a pair of mass shootings in El Paso, Texas, and Dayton, Ohio.

Loudermillk represents the district, which includes Bartow, Cherokee and parts of Cobb and Fulton counties, and said he took that criticism surrounding his support for the event personally.

In 2017, he was on a baseball field in Alexandria, Virginia, when a man opened fire on the Republican team practice, injuring six people.

“Two months after I was on the field, the victim of a mass shooting, I was here,” he said, pointing to the reception hall. “I didn’t associate this with that, even though there was a time I was dealing with some post-traumatic stress….”

The experience has only strengthened his stance on guns and gun safety, he said.

“The whole time I was pinned down, I never once thought, ‘Man, I can't wait to get back to Capitol Hill, I'm going to pass a law! No.”

He said lawmakers on both sides need to stop politicizing mass shootings and using them to score points against opponents, and that Congress needs to be less reactive with proposed solutions.

“Because the last thing we need to do is do something that won't have an effect, but we feel good about it,” Loudermilk continued. “And so the legislature walks away and they don’t do anything else and nothing changes.”

What Loudermilk and other speakers at the event say is that more needs to be done about people who might commit mass shootings and not the guns they use.

“I can tell you here in Georgia, we do respect the Second Amendment and the rights of all law-abiding gun owners,” NRA President Carolyn Meadows said.

The guns used in El Paso, Texas and Dayton, Ohio and even the Congressional Baseball Shooting were purchased legally.

But Ashford Schwall, the event’s organizer, says people who commit crimes with guns are not at all representative of typical gun owners.

“People too quickly want to blame the tool, blame the gun,” he said. “It's not the gun, it's the person... it’s his mind… something's wrong with anyone who would think that.”

But Loudermilk said that current proposals at the federal level would not have prevented the shooters from lawfully obtaining weapons and carrying out their plans.

He said background checks now don't screen for ideological radicalization or issues of mental health that might lead to violence.

Even so, Loudermilk said that the country needs to focus on the individual who commits these acts, not the tool chosen to commit the act with.

To start, he recommended listening to local law enforcement and educators to figure out how radicalization happens.

Back inside the reception hall, a live auction got underway at the end of the night. Former Congressman Bob Barr, an NRA board member, showcased a Georgia-made Daniel Defense rifle as the auctioneer cajoled the crowd. 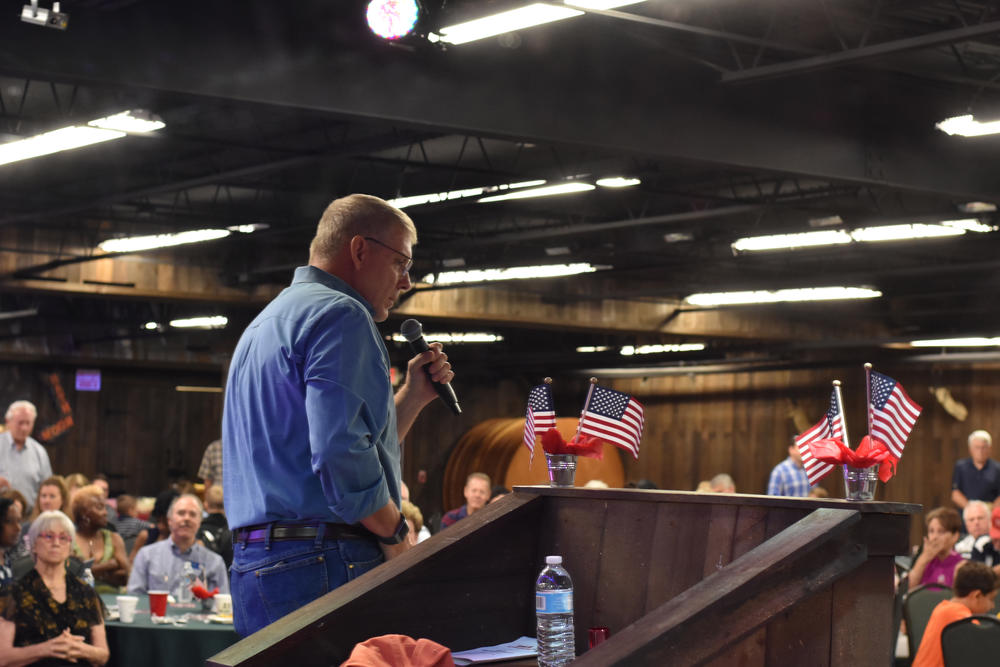 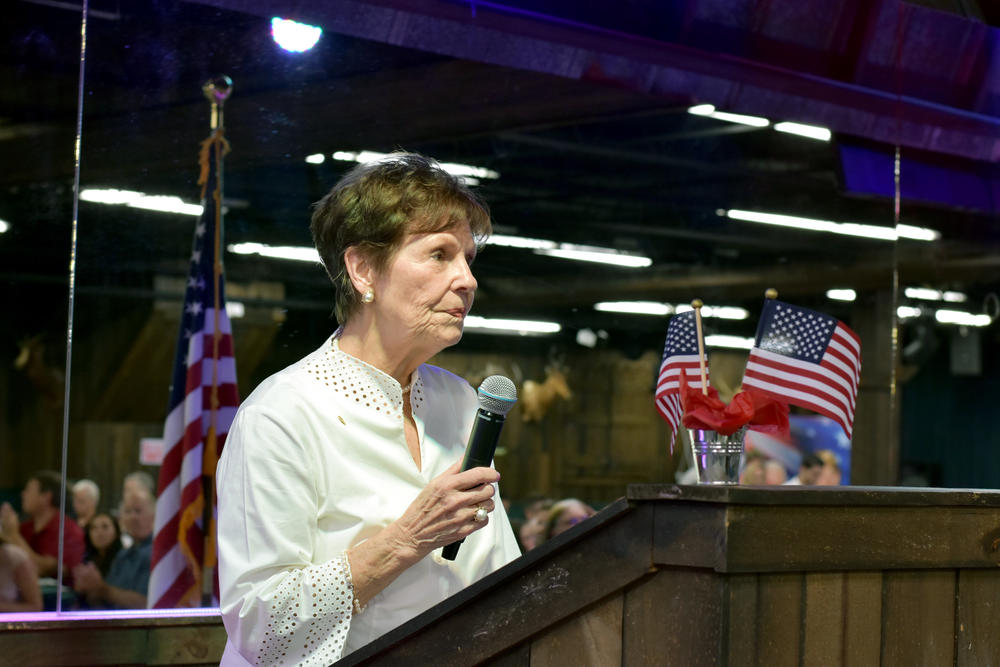 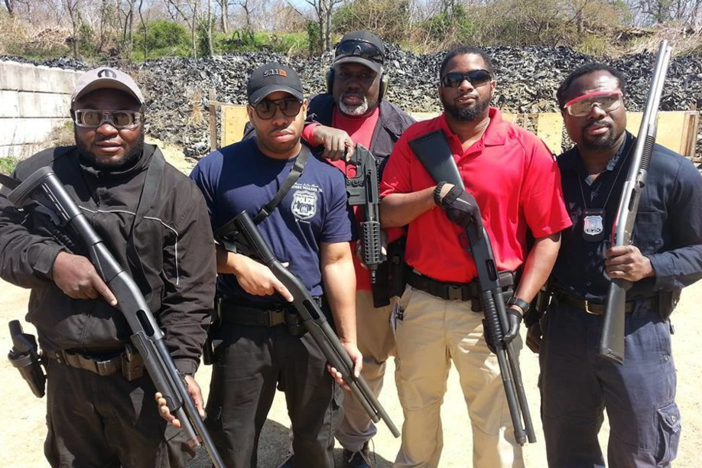