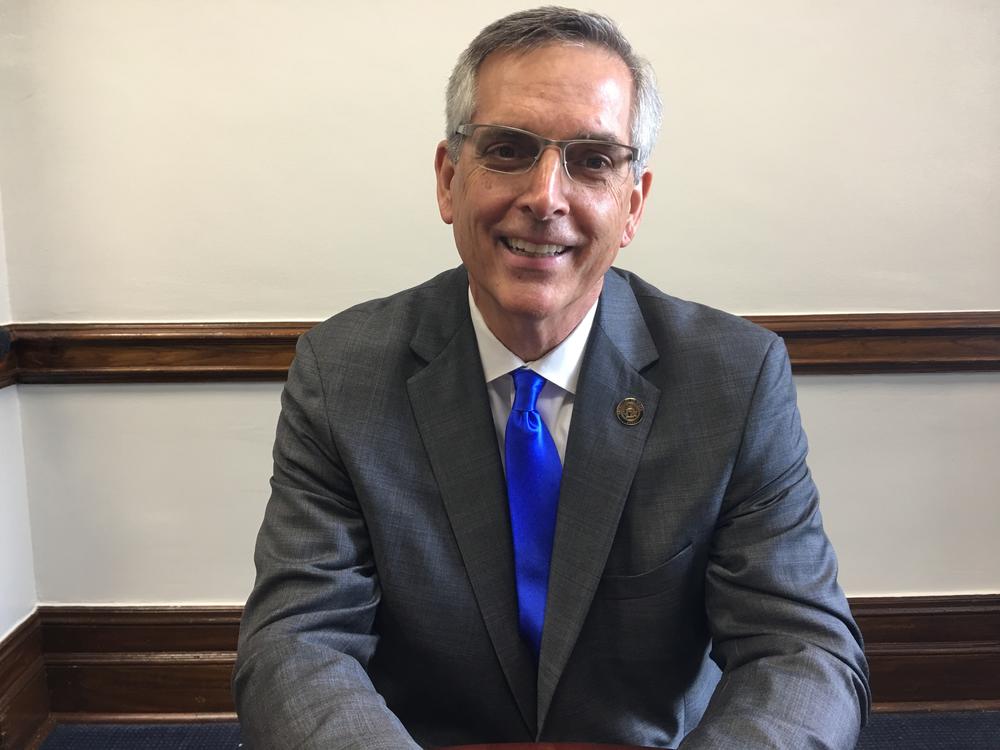 Secretary of State Brad Raffensperger says Georgians should have faith in the newly-announced voting machines coming for next year’s elections.

On Monday, Raffensperger announced the selection of Dominion Voting Systems as the state’s next voting machine vendor, with a $106 million price tag.

The QR code is used to count results on Election Day; the human-readable text summary is used for audits or recounts and the scanner takes a picture of the ballot that could also be used to verify results.

It’s a large step towards modernizing the state’s 17-year-old system and making elections more secure, as a federal judge is currently contemplating a move to hand-marked paper ballots for hundreds of local and municipal elections this fall. But critics say QR codes can’t be trusted to accurately reflect voter intent and the BMD technology is just as vulnerable as the current system.

Raffensperger told GPB News that his top priorities with the rollout of the new system are maintaining its security, making sure Georgians become familiarized with how it works and properly training officials to use them next year.

Here are excerpts of Raffensperger's comments, edited for content and clarity.

On differences between the old and new system

Well, the big change will be when [Georgians] show up to vote.

First of all, there'll be a new electronic poll book. And that electronic poll book has been shown to actually move voters, to get them ready to vote in 30 to 35 seconds. So, we're expecting to see shorter lines just on the front end. Flow management is going to be really improved, and that's a great thing to see.

But when you press that button it won't be to cast your ballot, it'll be to print the ballot. And then you'll need to review all your selections. You then take that ballot once you confirm that's what you wanted to vote for over to an optical scanner. When it goes to the scanner it makes an optical scan, like an electronic image of your ballot.

So that's been recorded, then it records the vote that you have and that drops into a box.

We will now be able to do physical recounts and will also be to do audits.

And obviously when it gets within a half percent, you can still do a physical recount on those very close elections. You'll see in some of the state House and state Senate seats, you'll have stuff that is within, 20-30 votes, so you can do the physical recount.

I think that is going to give voters that confidence that whatever the result is, we got it right. Half of us will be happy and half us will be sad because our person didn't win, but at the end of the day, what we want to make sure is that the process got it right.

I think that's going to give us great confidence moving forward.

On concerns about QR codes on the paper ballots

The system that we selected right now is EAC (U.S. Election Assistance Commission) certified, which is required by House Bill 316. And so, this system fits within that. It has little square boxes around the perimeter, it does have a QR code on the top, and then it has a human readable ballot. Now, I fully expect over the next 10 years there will be further software improvements.

And here's what voters need to understand: as the systems are improved, all those software improvements are going to be given to the state of Georgia at no additional cost. That was put into the contract. So, we have what we have right now, but there will be additional upgrades, just like in 2006 when the iPhone came out, now we're up to the iPhone 10 or 11.

And all of those upgrades in the state of Georgia are going to be free, no cost to the taxpayers. Because we've covered that in our contract.

On whether Georgia voters can trust the voting machine's accuracy

Every machine, before it goes out before an election, is tested and certified that it's accurate. After the vote is secured, then we're going to be doing audits. So, if you see an anomaly, it would show up during the audit process. As you're going through it doing a physical recount, when the recount is done, that is actually looking line by line of the human-readable selection.  Who your selection was for president, who your selection was for vice president, who it was for the state Senate who it was for the state House… all those audits are done by hand counting at that point, because it's a much smaller sample size.

Well, voters need to understand that security is my top priority.

When we go to the National Association of Secretaries of State, a large portion of what we talk about is security, both physical security and cybersecurity. Not just in Georgia, but all secretaries of state, we understand that.

I think 2016 was probably a wakeup call, that we have these actors out there that are trying to create mischief. And if they can penetrate a voter database, that's what they're going to try and do, if they can do something to upset the election, or give you that lack of confidence so you start saying, “Well, I don't know if my vote really counted” and “Does it really make sense?”

So, we have to make sure that we have maintained robust security measures. We have already reached out to cybersecurity experts, we're going to bring additional security experts in here. We partnered with the Department of Homeland Security, we also sit on several organizations to make sure that we maintain a strong, robust security that we can have, we understand how critical it is.

It's a big task. Some people could say, “Well, gee, the hard part’s done, now the easy part.”

No, now is actually the third quarter, it’s going to be a very strong and tough quarter for us, we understand that. One of the things that Dominion Voting Systems has offered us, and was part of the RFP, is very strong and robust training.

It will not just be here based at the Capitol or in the Atlanta area, it's actually getting out throughout the entire state of Georgia, for the regional training. That's going to be starting here, next six weeks or less.

And we are going to have rigorous training to make sure that everyone feels comfortable about it. We understand the difference between great corporations and mediocre corporations. At the end of the day, it gets down to training and communications.

We understand that training is job number one. We've selected the system, now it's getting out there and training, the folks that are going to do the hard work of running the elections.

On the state procurement process and vendor selection

If you look at the RFP that we put out, it is very comprehensive. It was hundreds of pages. We were fortunate that we had three vendors that responded back to us.

On the pricing side, we were not aware of what the pricing was until very late in the process - that was kept away from the evaluators. So DOAS (Department of Administrative Services) had what the cost was, and there were points scored for that.

The cost was 25% of the total numbering system. So 75% of it was the technical merits. They went through the process and were very diligent in it and robust in their evaluations, and I appreciate their effort.

And then obviously, we made this selection, and we put it out there. Now, we want to get that all out to the public. So, you know, kick the tires, read everything. There's some people that will read the thousand pages that are out there, all the reports, and that's good, that's out there available for them to do that. We welcome their feedback.

On the reason Georgia is upgrading to a ballot-marking device

I mentioned the iPhone that came out in 2006, and you've had 10 or 11 improvements and updates. And that's the new system. We're still working with a system that hasn't had software code updated since 2005.

What people don't understand is that it's not available, because that original company went into bankruptcy, and the software code and the rights to that were separate at the time. So, it was not available for an update.

We've used it. It came out that there's never been a hack of that system, so it's been secure.

But obviously, it's older. Just like if you have a car that was 17 years old, you might want to upgrade it to a new car and you’d like to get the latest technology. That's why we're updating it, and it makes a lot of sense.

Obviously, we're going to follow what is the best practice that we're seeing, and right now people in America are either using ballot-marking devices or hand-marked paper ballots. But no matter what system they use, everyone is walking five or six feet over to the optical scanner. Whether we use the hand-marked paper ballot, or if we use the ballot-marking device, we're going to have an optical scanner.

If you look at what they're doing in Los Angeles County: Los Angeles County has developed their own system. At the end of the day, what they chose was a ballot-marking device with an optical scanner, just like Georgia, different company. It’s not a hand-marked paper ballot. And look, Los Angeles County, if you want to be honest, is a blue county. And we're going the same way that California did.

So, we think it's the best way to make sure that we secure voter intent, it makes sure that everyone is treated the same whether you have a disability or you’re non-disabled, everyone uses the same machine. And we think that's a good thing that we're treating everyone the same. I think that's a great heritage for Georgia.

Well, I had a person in my office just this morning talking about a new technology. And we're going to bring our technology team together and take a look at what this person was talking about.

Our ears are open, eyes are open. We are wanting to find out what are the best practices.

Like I said, we've already brought in cybersecurity experts. In fact, one of the bills that passed the last session was that we were going to work towards hardening our facilities and making sure we had NIST standards, national standards for cybersecurity and other measures.

Help GPB News cover voting and voting machines in Georgia by filling out this survey.

The secretary of state's office is reviewing a petition signed by more than 1,400 people asking for another, deeper look at the state's new voting... 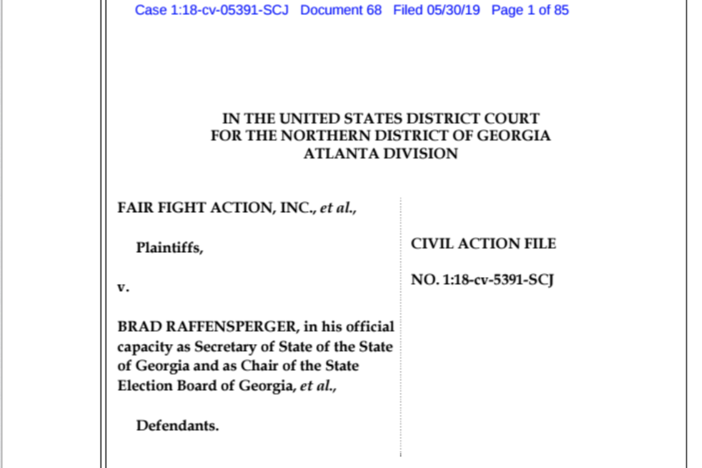