Why The Port of Savannah Has Been Smashing Trade, Revenue Records

President Trump said he would pause tariff escalations with China after meeting with that country’s president, Xi Jinping, at the G20 Summit.

One Georgia industry tracking the ongoing talks is shipping. The Trump administration had threatened a 25% tariff on ship-to-shore cranes that come from China. The Georgia Ports Authority is ordering six new ones at a total cost of $70 million. Its executive director and Georgia’s U.S. senators are asking the White House to rethink taxing them. That's because the cranes are just one piece of a $2.5 billion expansion at the ports that's smashing trade and revenue records.

Georgia Ports Authority Chief Operating Officer Edward McCarthy gives an audio tour that shows how the Savannah Harbor Expansion Project has been churning out record trade and revenue, even before its completion.

The investment is already paying off with a 30% trade increase in volume in recent years. That makes Georgia’s port one of the fastest growing in the U.S., and those record-breaking exports and imports have been bringing record-setting revenue. The Georgia Ports Authority calculates its annual economic activity at $84 billion dollars.

On Second Thought wanted to see in person how the Savannah Harbor Expansion Project is causing shipping profits to skyrocket, so Georgia Ports Authority C.O.O. Edward McCarthy offered a tour.

He started with a look beneath the waves, where the U.S. Army Corp of Engineers is deepening the Savannah Harbor from 42 feet to 47 feet. The federal government is picking up about three-fourths of the cost for the almost billion-dollar project. The rest is on the state.

McCarthy explained: “For every foot that the Army Corp can deepen the river, we can add 200 more containers, so, for five feet that they are about to dredge out, that’s a thousand containers per ship. That adds up to hundreds of thousands of containers on an annual basis to the state of Georgia.”

A ship’s size is measured by how many containers it can hold.  The increment is called a TEU or twenty-foot equivalent unit.  Old-school ships held fewer than a hundred TEU. The 42-foot harbor has been admitting 4,800 TEU vessels, and the expansion has opened the way for “megaships” that hold 14,000 TEU.

As anyone who’s ever moved knows, once you arrive, you have to unpack. That’s where those huge ship-to-shore cranes come in. At 6 stories tall, the ones built for megaships soar above the harbor, and their booms can reach hundreds of feet higher.

A daunting ride up a rickety, metal elevator provides access to the top of one of the cranes, and a bird’s eye view of how cranes unload cargo that comes in on ships. Speaking from 160 feet up Crane 36, McCarthy looked into a megaship.

“What you’re seeing is the ship-to-shore crane landing the spreader bar on top of the hatch cover and lifting that 30-ton piece of metal back to the ship to cover up the below deck of the ship so we can load containers on top of them,” he said.

The dredged Savannah Harbor will be able to hold six megaships at once. Time is money, so the Georgia Ports Authority plans to have 37 cranes big enough to unload their goods and allow more ships to pass through the port on a given day.

The cranes transfer the shipping containers to a more typical mode of transportation: tractor-trailers. Some trucks head to the dozens of warehouses that have sprung up near the port. Others transport goods across the nation’s highways and sometimes clog those roadways.

G-DOT is rebuilding the interchange where I-16 meets I-95, which is near the port, to ease a bottleneck there. It’s also widening I-16, which runs from Savannah to Macon.

A plan is underway to get some of those trucks off the road altogether. A mega rail hub is under construction near the port. It’s expected to double the amount of cargo that leaves there by train. It’ll have 18 tracks spanning 180,000 feet. The hub will accommodate “unit trains,” which span more than 10,000 feet.

By 2020, the new hub is projected to start sending out the port’s cargo on the mason mega rail line.

“We have a $200 million project that we’re doing to link the two railroads [near the port] together, reaching beyond Atlanta. Atlanta’s a huge hub, but our goal is to reach Memphis, to reach Chicago and maybe even Kansas City.”

At the end of his tour, McCarthy gave a basic equation for how the Savannah Harbor Expansion Project is breaking records. Deeper water allows for bigger ships. Those ships carry more goods, and improved truck and train routes get those goods to consumers faster.

In fairness, not everyone is on board with the expansion of the ports. Environmentalists want to make sure the expansion plans take into account area wetlands and fish.

Despite those concerns, the Georgia Ports Authority is already looking into expanding more. Shipbuilders have begun constructing vessels that top 21,000 TEU, and officials are already wondering if such ships will someday call at the Port of Savannah. 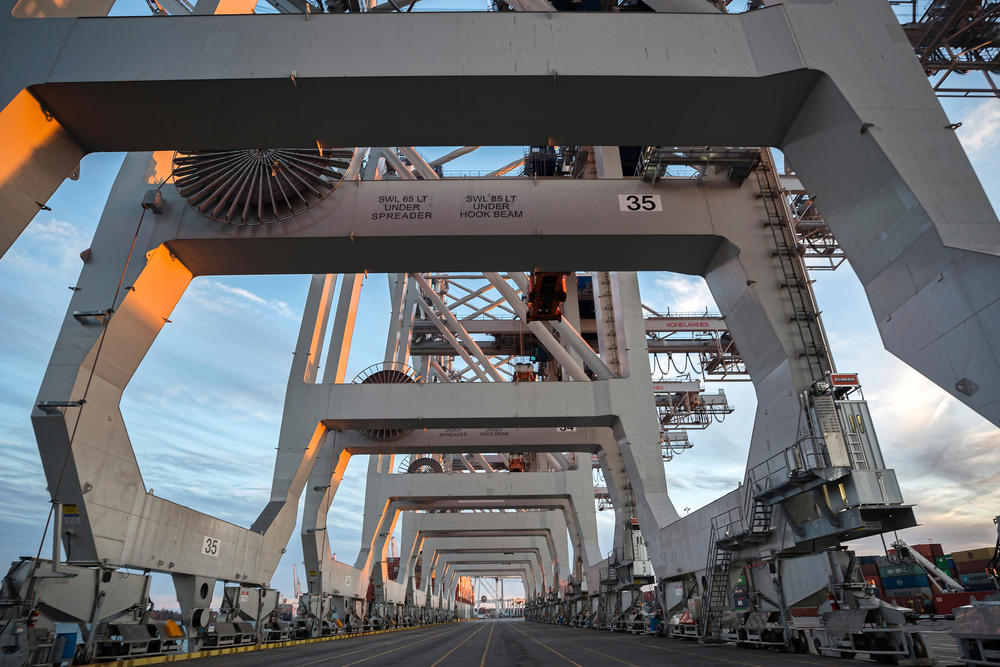 Caption
Ship-to-Shore cranes are lined up along the dock at the Georgia Ports Authority Garden City Terminal near Savannah, Ga. 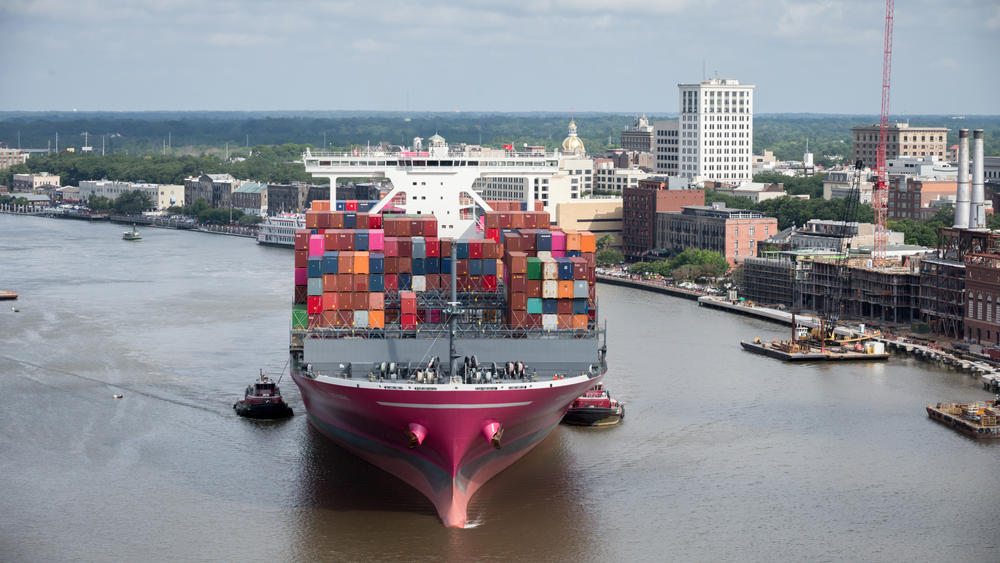 Caption
The Ocean Network Express vessel Stork sails up river past historic downtown Savannah on its maiden voyage to the Port of Savannah. The ship holds 14,000 TEU and can only access Savannah because of the harbor expansion. 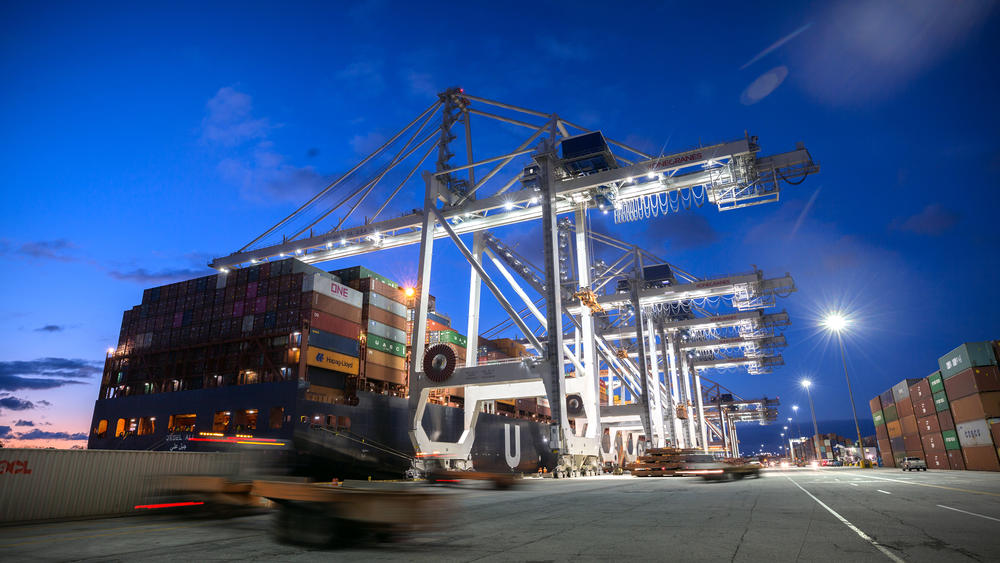 Caption
A Hapag Lloyd vessel with a capacity of 13,300 twenty-foot equivalent container units is worked at the Georgia Ports Authority Garden City Terminal in Savannah, Ga. 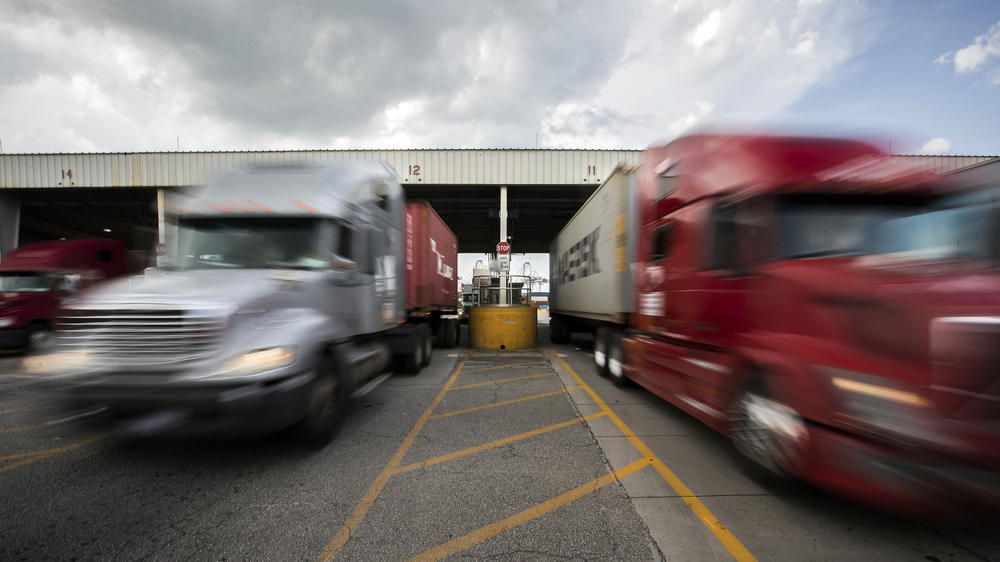 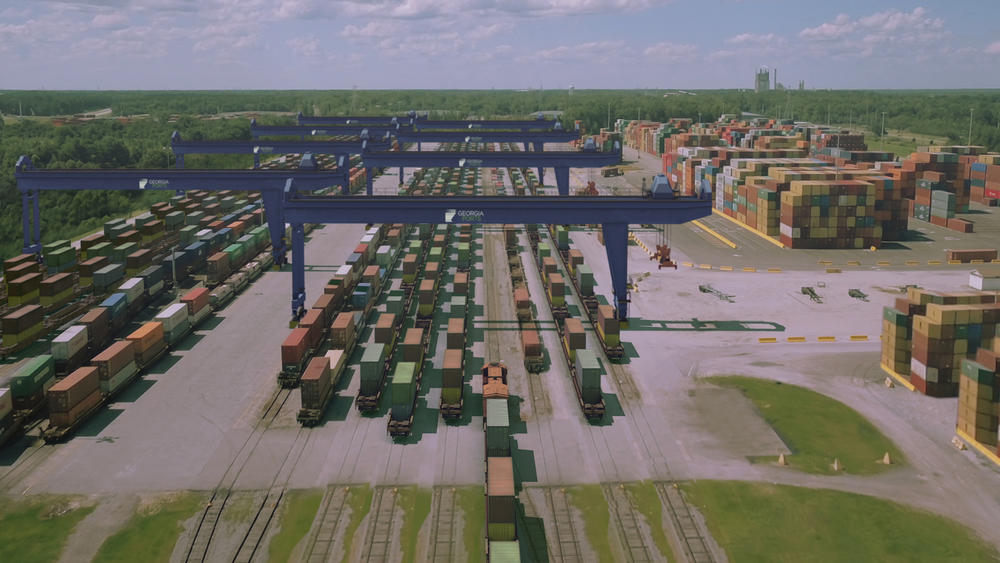 Caption
By 2020, the Port of Savannah plans to complete a train hub that will allow it to transport cargo on the Mason Mega Rail.
Tags: Savannah Harbor Expansion Project  Port of Savannah  Georgia  Savannah