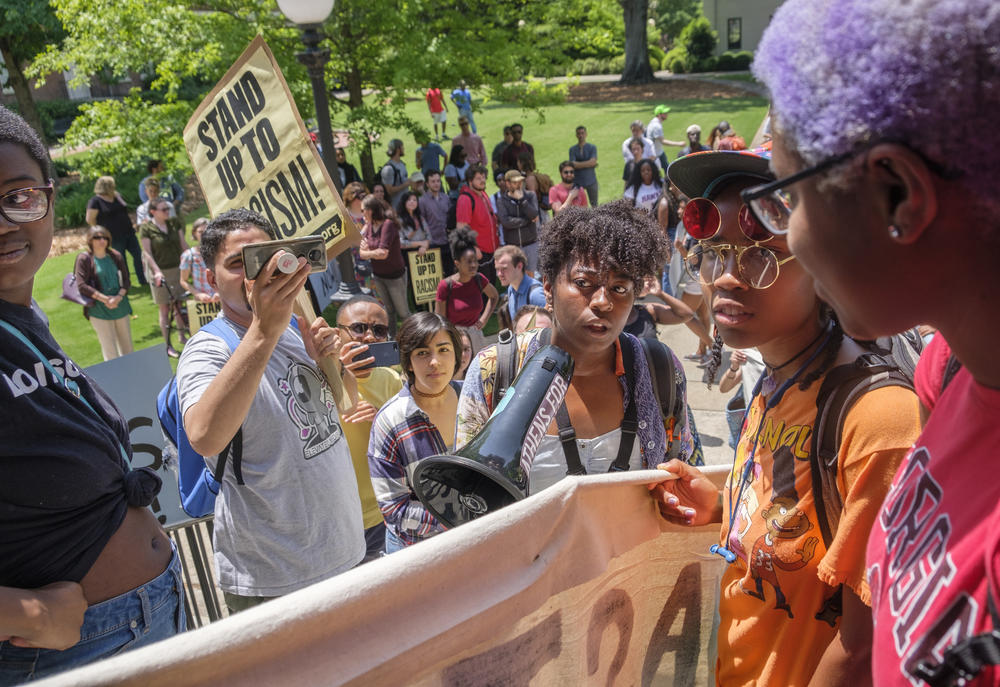 Protesters marched on the steps of UGA's Administration Building this spring to demand reparations.

The University of Georgia continues to grapple with a difficult chapter of its history. It’s been under fire for how it handled the discovery of human remains under a school building during renovations. They appear to belong to people who were enslaved.

The growing tension recently erupted in protests. Demonstrators want reparations for descendants of slaves who built the university, including financial support for university staff and students as well as acknowledgment of the school’s history publicly and within the classroom.

GPB reporter Grant Blankenship went to Athens to witness the protests, and he talks with On Second Thought about what he found.

On the University of Georgia’s response to finding human remains

The initial response was that the university said these were likely the remains of white people. This was informed by the original contract archaeology that was performed at the site. Once UGA figured out that in fact, no, these were African American remains, then where the remains would be reinterred is what caused people to be very angry.  The ones that could be recovered from the building — there's still some underneath the building — they were buried in the cemetery behind Baldwin Hall, which historically was a segregated cemetery. And so that caused a lot of pain I think for a lot of people in Athens and a lot of anger.

On protesters' demands for material and symbolic change

The material thing is grounded in the idea that there are descendants of people who were never paid for their labor on the campus of UGA who still live in Athens and the Athens community. ... They want all the people who work on campus and the physical plant, in the dining halls, to get a minimum wage of about $15 an hour. That's about $31,000 a year. The argument is that these are the descendants of people who are likely unpaid for all the work they did to build the university so they could at least get a living wage. For their part UGA has said that they are raising the minimum wage on campus to a little over $12 an hour, that's about $25,000 a year.  Now the symbolic change piece of it is [protesters] want students at UGA to be taught just as a matter of their education that slavery helped build the university.