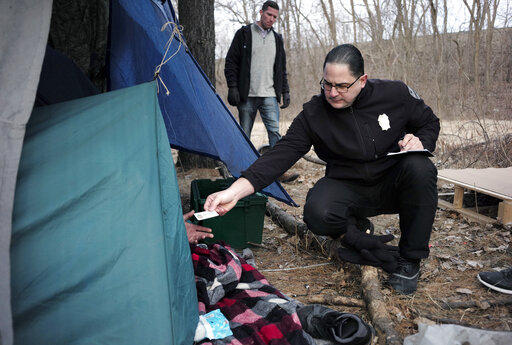 Officer Angel Rivera, right, returns a license to an unidentified man as Rivera asks if he has been tested for Hepatitis A at the entrance to a tent where the man spent the night in a wooded area in Worcester, Mass, after an outbreak of hepatitis A.

More than 300 people in Georgia have been affected by hepatitis A and one person has died between June 2018 and May 3, state health officials said Tuesday.

The report comes the same week as officials in South Carolina report an outbreak of hepatitis A in Aiken County. That's 30 miles from Augusta, where the Georgia Department of Public Health reported the second highest number of cases. Rome had the highest number with 137 cases of hepatitis A.

“Given the steady increase in cases, we determined that South Carolina is experiencing an outbreak,” said Dr. Linda Bell, South Carolina state epidemiologist and director of the Bureau of Communicable Disease Prevention and Control. “As a result, DHEC is intensifying efforts to control the spread of hepatitis A to avoid a severe outbreak that could threaten the general population.”

Hepatitis A is a contagious liver infection caused by a virus that is typically transmitted through person-to-person contact with someone who has the infection or through eating or drinking food or water contaminated by an infected person.

Most people who contract hepatitis A feel sick for several weeks, but they usually recover completely and do not have lasting liver damage.  People usually become sick within two to six weeks after being exposed, and symptoms include nausea, vomiting, diarrhea, stomach pain or yellowing of the eyes and skin.

Of the Georgia cases, 47% were connected to illicit drug use, especially with intravenous drug use. In two-thirds of the 312 state cases the person had to be hospitalized.

The state health department is fighting the rise in cases by trying to vaccinate and educate homeless men and women, men who have sex with men and users of illegal drugs. Throughout the state, 2,800 vaccines have been administered by local health departments. 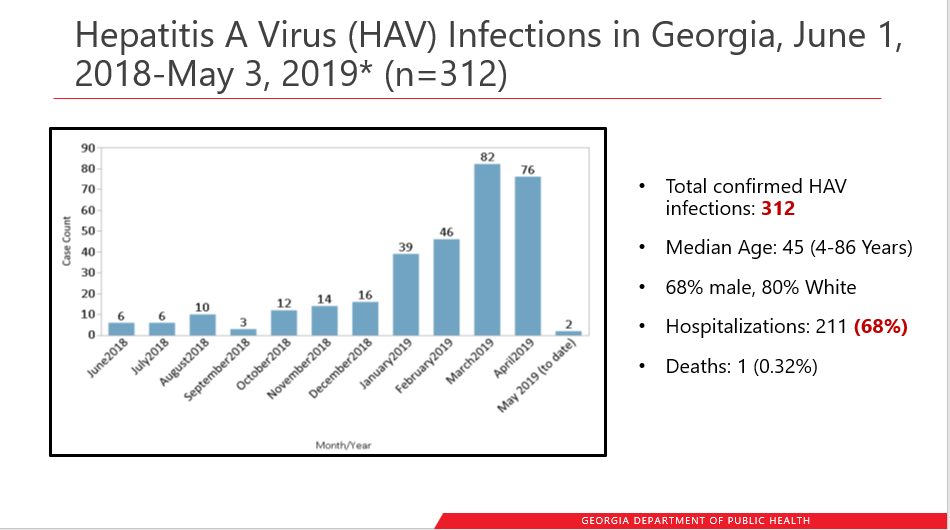