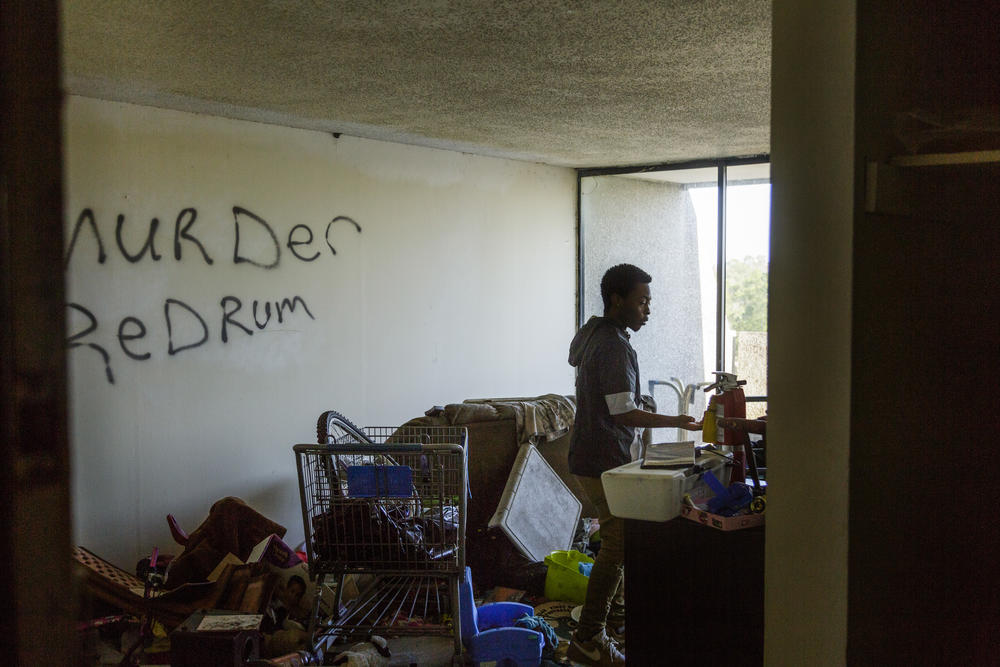 Caption
Darrell Osgood walks through a squat down the hall from his apartment in Macon. Despite utilities rolled into rent, management recently let the water get cut off. It's only the latest indignity that has residents wanting to talk to corporate.

When Patricia Jordan got home midmorning on Wednesday last week, all she wanted was a bath. But, for the second day straight, she was out of luck. The water was still off at Crystal Lake Apartments in Macon.

That meant that Jordan, who had just left a hospital visit with her daughter after working her regular overnight shift at a nursing home, would likely stay unbathed until her next shift that night.

Water from an early rain dripped on the plastic containing a supermarket chicken she’d brought home for lunch.

“That’s the only water I’m going to get,” Jordan said, tongue only slightly in cheek. “Thank you, God. I need a bucket.”

The water was just the tip of the iceberg when it came to what was wrong with the 11-story building at the heart of Crystal Lake. The elevator was broken, so a wheelchair-bound tenant on one of the upper floors needed neighbors to carry him down the stairwell. The open stairwell smelled of human waste and, since vacant apartments were largely unsecured, there were squatters. One had graffitied the words “Murder” and “Redrum” on a living room wall on the eleventh floor.

Macon-Bibb County government has been amassing a list of code violations at Crystal Lake that is pages long and runs as far back as February of 2018. Each violation gave owners 10 days to fix things. One citation was for "Structures Unfit For Human Occupancy."

And still, Tiara Nash said the landlords want their money.

“They get the rent,” Nash said.

Tiara Nash and her mom have an apartment on the first floor for which they pay $840 a month, a sum that according to their lease should include utilities like water. But when Nash ever tries to get management to do something about the problems in the building, she said it is always the same answer.

In some of the most impoverished regions of the country, property owners use a perfectly legal financial arrangement to make themselves hard to find, either by tenants or by lawyers and government officials. And while there are legitimate reasons for property owners to do this, when the system gets abused, tenants can suffer.

Down another trail, a story about that 2017 sale in the Macon Telegraph quoted Steve Firestone, CEO of Crown Bay Group LLC as the owner.

“This is a very interesting property and we are very excited to bring it back to a high standard,” Firestone is quoted as saying in the story.

So getting the water back on should be as simple as calling up Steve Firestone, right? Well, no. Because on the surface you can’t actually draw a straight line between Firestone and Crystal Lake Holdings, LLC. Why? Chris Wells, who teaches business law at Mercer University, said it’s because of those three letters, LLC, which is short for limited liability company.

“It's kind of like the Wizard of Oz right. The guy behind the curtain,” Wells said.

Wells said you can think of an LLC as the wizard’s curtain, though in legal parlance it’s a “veil of privacy.” Why put a business behind a veil? There are lots of reasons, but the biggest one is to keep the risk from one business venture from crossing over into others. In practical terms this means that if you have an LLC that goes under, creditors can only sue the LLC and they can’t come after other assets, like your family home or other businesses.

However, Wells said that feature can be abused.

“Hypothetically, they could be milking this LLC of all of its assets and leaving it essentially penniless,” Wells said.

Alan Mallach is a senior fellow at the Center for Community Progress who has has studied property milking across the country.

“What milking looks like is when somebody buys a property, buys a rental property with no intention of holding onto it or maintaining it for the long haul,” Mallach said. “Basically [a property owner] is going to try to get the most he or she can in rents out of over a few years while paying the least possible amount in terms of maintenance, operations, repairs.”

Mallach said this happens in places where property values are very low compared to the rents a landlord could charge, and those tend to be among the most impoverished regions of the country.

“A lot of the small cities, small towns, rural areas all through the South,” Mallach said. “And for that matter in the plains in Appalachia and of course the Rust Belt.”

And while having your business hidden behind an LLC is not a prerequisite for milking a property, Mallach said it helps the milker stay one step ahead of the law.

“If you're trying to exploit the property and milk it obviously it makes it easier if you can hide,” Mallach said.

Mallach has a suggestion. He says it would be helpful if cities established public and open registries of rental property owners, complete with names and contact information. The landlords could still enjoy the financial benefits of an LLC should they employ one, that is protection of other assets should their property go down the tubes, but the public would at least know where to find them.

After word of conditions at Crystal Lake got out, local government decided tenants had to go. So late on a Friday afternoon, firefighters went door to door and floor to floor shouting to any tenants, or squatters, who may have been inside.

“Fire department! We’re evacuating the building!” a pair of firefighters shouted while a third tried to keep track of where they had been.

With the elevator still out, a set of dresser drawers thudded down the stairwell from the eighth floor, barely controlled by two young guys from the rent to own store. Some people called around looking for help. Others hurriedly stuffed suitcases into car trunks.

Chris Wells said the legal term for what was going on, people being forced from their homes because of the safety of the structure, is "constructive eviction" and it can convince a judge that property owners can’t hide behind an LLC anymore.

What’s more, it turns out Crystal Lake Holdings LLC might have lost its right to anonymity when its LLC registration lapsed last year in the state of Delaware, a state where LLC privacy laws are the most generous.

But these sorts of legal arguments don’t turn the water back on quickly, or help Angelia Starks find someplace to stay. Starks and her neighbors found out at 5:10 p.m. they had until 6 p.m. to find a place to go.

“We don’t have nowhere to go,” Starks said with a strained voice.

“If we had somewhere to go we'd have been left when the power and water went out,” a neighbor concluded.

Turns out someone is buying Crystal Lake Apartments. The new owners tell Bibb County they expect to close the deal in March then take at least six months to get things up to code. For now, tenants are sleeping in a county recreation center, a homeless shelter and hotel rooms if they can afford them. Some are getting help from area churches. Eviction letters are going out this week.

And the buyers, are they new owners? Or are they the old owners with a new LLC?

Only their lawyer knows.

Caption
The high rise at the center of Crystal Lake Apartments, left. Play money in the stairwell of the building, right.

Caption
Some of the bottled water Clarence Matthews bought for his family after the water was cut at Crystal Lake Apartments, left. Right, residents of Crystal Lake Apartments say in addition to the water being cut off recently, management lets trash pickup lapse. When it does get picked up, they say its piled so high it gets spilled from the dumpster and left behind. 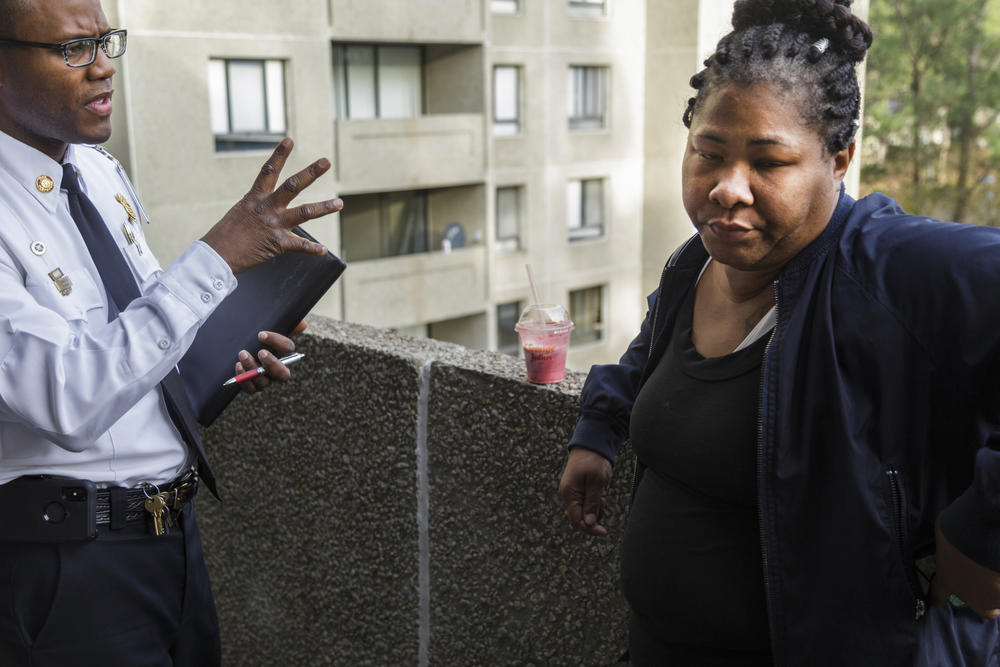 Caption
Angelia Starks, right, reacts to news that she and her neighbors have to evacuate their homes at Crystal Lake Apartments due to rafts of safety code violations. Macon-Bibb County government shut the place down after water service to the apartments was off for two days. "We don't have nowhere to go," Starks said before a neighbor concluded. "If we had somewhere to go, we'd have been left when the lights and water went out." 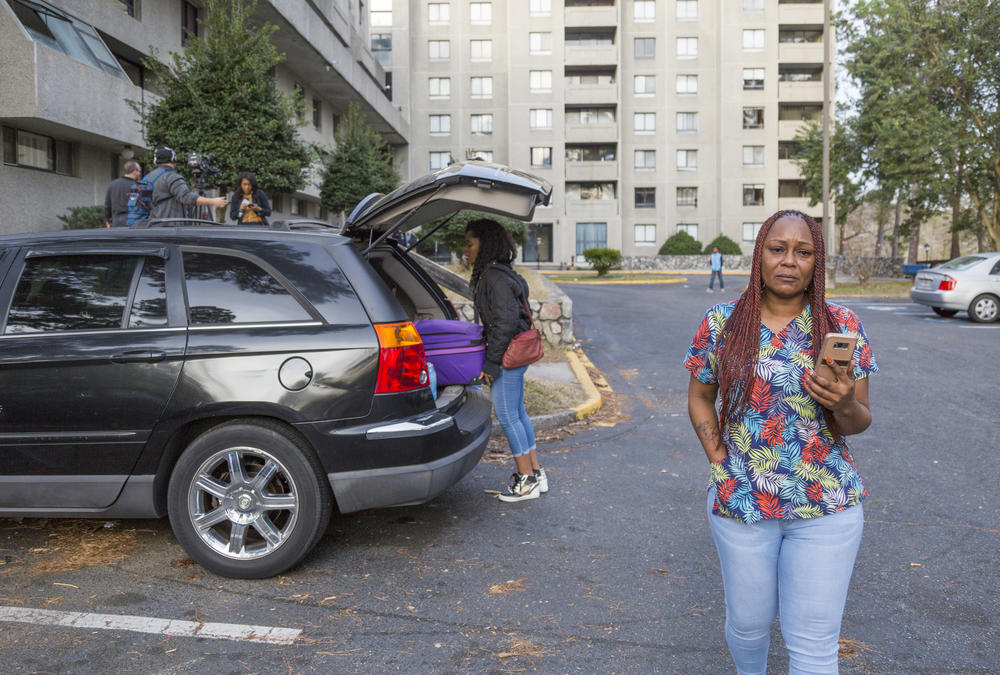 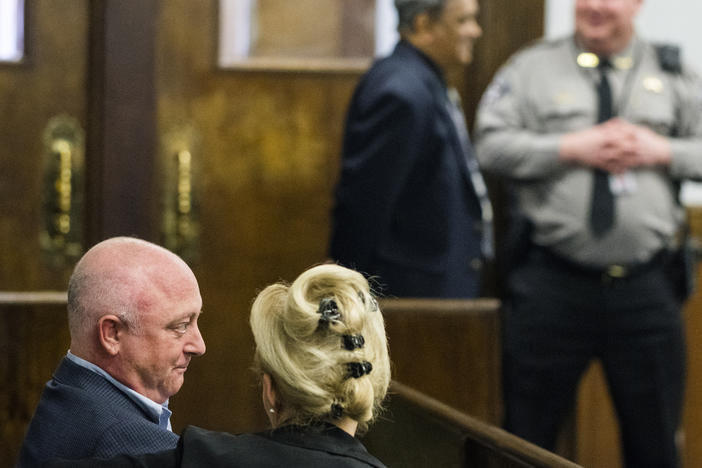 The landlord of a Macon apartment complex that made news when tenants were forcibly evicted when property managers let the water get cut off may have... 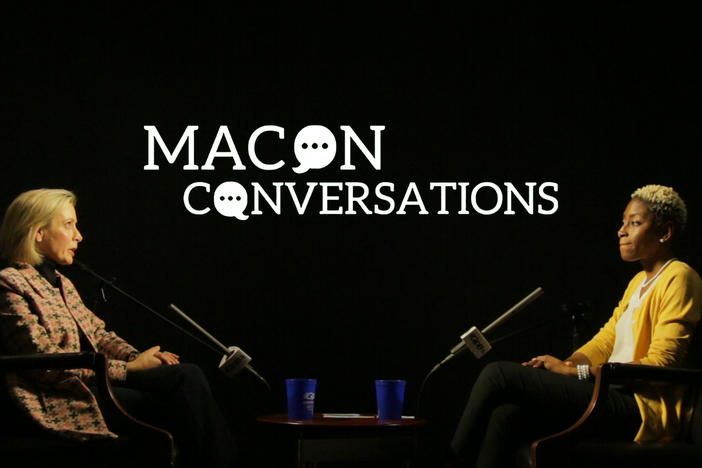 Tonja Khabir and Katie Powers both work in the world of non-profit philanthropy. In this Macon Conversation, Khabir and Powers talk about the need for...