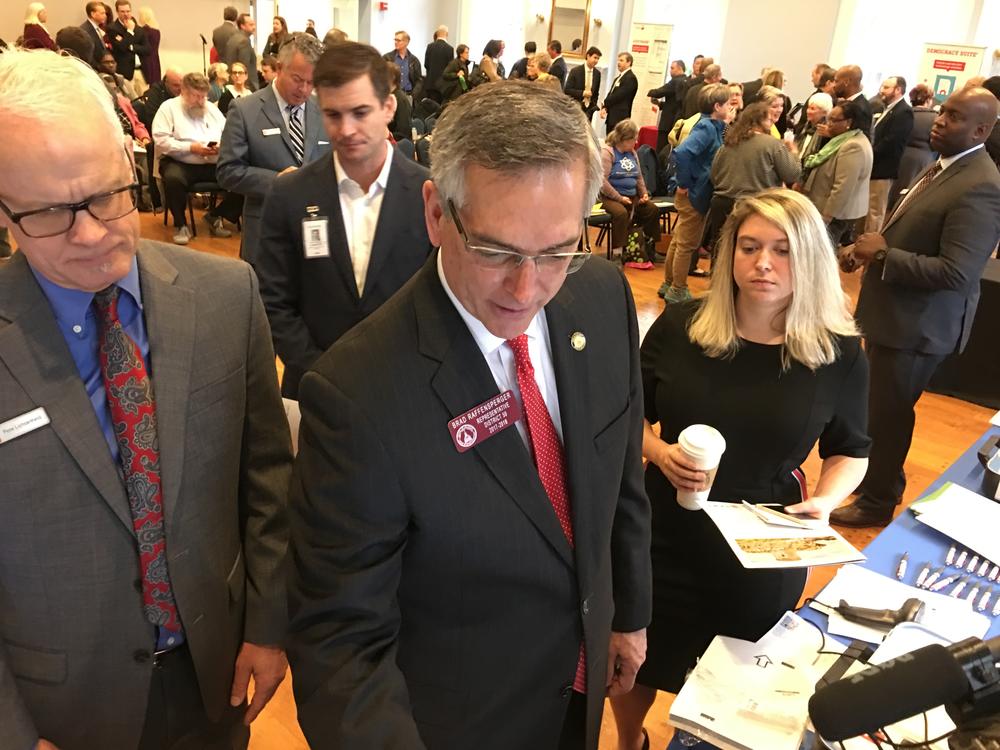 Lawmakers and laymen alike huddled around stacks of paper and gleaming touchscreens to test potential replacements for Georgia’s aging touchscreen digital voting machines at the Georgia Freight Depot in downtown Atlanta on Thursday.

Clear Ballot, Dominion, Election Systems & Software, Hart InterCivic and Smartmatic were on hand to show their wares. Robis Elections and Unisyn Voting Systems also responded to the state’s request for information but were not present at the demonstration.

Each of the proposed systems at the demonstration uses some sort of paper trail to record and count your votes, which is not something the current machines do.

And to learn more, I gave them a try.

At Clear Ballot, I bubbled in my choices on a hand-marked paper ballot, which is then fed into a scanner to be counted.

As he walked me over to a computer, Clear Ballot’s Bill Murphy said the company offers transparency with elections because of the software they use.

“At Clear Ballot, we believe an identical paper ballot is the best way to go, because it gives us the ability to extrapolate every voted mark and present them in a way that makes sense to election officials,” Murphy said. “So rather than just giving them a number that says there was 150,000 ballots that were cast, we show you every one of those votes.”

Clear Ballot said its system allows state and local officials to visually discern what a voter did when they filled out a ballot to make sure more votes are accurately counted.

The instructions on the ballot have voters completely bubble in an oval, much like standardized tests given in schools. But the Clear Ballot system was also able to detect voters circling the candidates’ names, drawing an ‘X’ in the circle and other atypical behavior – and counted them as votes.

At the end of our demonstration, Murphy reiterated the level of transparency he believes his company provides.

The paper ballots are either pre-printed or printed on-site and filled out by bubbling in rectangles next to your electoral choice.

Hart’s Peter Lichtenheld said their scanners will push the ballot back out to voters if the page is completely blank or if it detects an “overvote” with multiple choices filled in. He said the machine is capable of counting boxes that aren’t fully filled in because it reads the number of pixels.

“Basically anything bigger than four-and-a-half or five pixels – which is a dot – is going to get picked up,” Lichtenheld said. “We want to ignore little tiny dots… but a dot also could be a voter's mark.”

Unlike Clear Ballot, any marks made outside of the rectangle next to a voter’s choice will not be detected and counted with Hart InterCivic.

With the BMD system, a voter is handed a one-time access code to load up the correct ballot style. The voter then inserts a piece of special paper into the machine and votes using a touchscreen.

Lichtenheld pointed out the layout of the ballot on-screen uses the American Institute for Graphic Arts’ Design for Democracy method, which incorporates usability studies and design principles to make elections easier to understand and more accessible.

After your vote is cast, the Hart InterCivic system prints a textual record of your choices onto that piece of paper, which is something Lichtenheld said is a special part of their machines.

“We use optical character recognition at the scanner,” he said. “So we're going to actually read the words from the printed paper and that's going to become the digital record.”

The only company that did not have a hand-marked paper ballot demonstration that day was ES&S.

Their machines are similar to how we vote now in Georgia. You check in, touch the screen to cast your votes – but your voter card is now a piece of paper. That piece of paper has a textual record of your votes plus the races on the ballot underneath a row of barcodes corresponding to your choices.

The barcodes are then scanned, the ballot falls down into a locked box that looks like a giant trashcan and the memory device on the machine is used to tabulate the votes once polls close.

If a recount or an audit needs to happen post election, ES&S says having a hard copy of the paper ballots ensures they can physically be counted, as opposed to a direct-recording electronic machine showing just the final tallies of results.

Dominion’s options included a handmarked paper ballot and a BMD. The paper ballot gets inserted into a scanner, which shows a voter what they selected as well as any problems, such as an overvote or a blank race.

The BMD uses a touchscreen to make selections similar to the other vendors, and a result is printed out using a standard commercial printer. Just like other ballot-marking devices, the text of the races plus a voter’s selection is printed out, plus a QR code.

Dominion’s system then scans the QR code to record votes into the system.

Many activist groups in attendance have concerns about votes being counted via QR codes and barcodes. Several people in attendance wore yellow “ban the barcode” shirts.

She said there’s no way to accurately conduct a recount or audit results on machines that use barcodes or QR codes because voters can’t know that their choices were correctly scanned.

Marks also said she fears the wrong options are being demonstrated and considered, and that many vendors were bringing more expensive and complex systems than Georgia needed.

“Almost all of these vendors have the right options available, but they’ve been told this state is interested in machines that cost about five times more than what the state needs,” Marks said. “All of them have the capability to read handmarked paper ballots.”

The final vendor, Smartmatic’s system, showcased a text printout of who voters selected in each contest.

After voting on a touchscreen and reviewing the choices, a paper slip with your vote drops down in a plexiglass window next to the screen.

The slip also has a barcode identifying whether the ballot is valid and a giant QR code with the vote choices embeded, but Smartmatic said the human-readable text on that slip is what is actually scanned into their system to be counted.

One thing all the systems had in common? The capability to display one election contest on the screen at a time.

It’s part of the most recent Voluntary Voting System guidelines put out by the Federal Election Assistance Commission to improve functionality, accessibility and security of the voting process.

But Smartmatic’s Ed Smith said whether that and other guidelines end up in the final product is up to Georgia.

“They're not voluntary for us … we can't opt out of them,” Smith said. “But different states can opt out of them because the Constitution sets election power at the state level not at the federal level.”

“We're looking at all the technologies and all the platforms to see what's out there,” Raffensperger said. “And then obviously the SAFE commission will be finishing up shortly and hopefully offering some recommendations.”

The commission will present its final report to lawmakers later this month. Raffensperger hopes to select a new system and have it fully in place for the 2020 elections.

After three days and close to 10 hours of public testimony, a House committee passed a measure that would change Georgia's voting machines and modify...