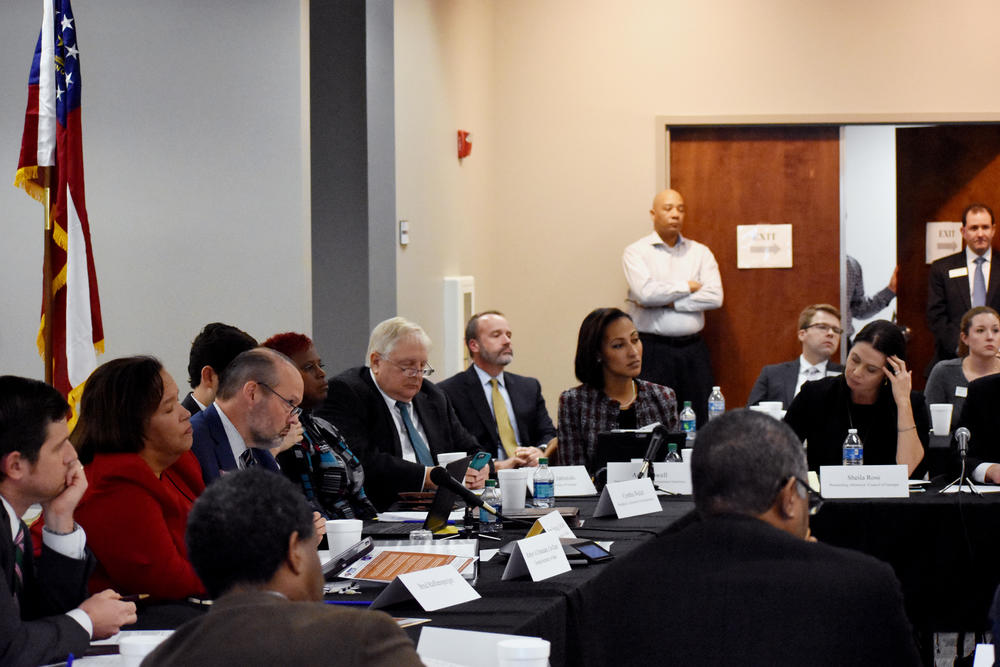 Caption
Members of the SAFE Commission discuss the future of Georgia's election system at a meeting in Macon Dec. 12, 2018

A bipartisan commission has been meeting to weigh possible replacements to the state’s current touchscreen voting machines, but is not yet sure what the replacement will look like.

The Secure, Accessible, Fair Elections (SAFE) Commission is made up of county elections officials, state lawmakers and experts on  cybersecurity and accessibility.

The group was started by then-secretary of state and soon-to-be Gov. Brian Kemp, and has met over the last few months to learn more about voting in Georgia.

A bipartisan commission is weighing replacements to Georgia's 16-year-old voting machines. GPB's Stephen Fowler reports from the most recent meeting of the SAFE Commission in Macon.

One member is Republican Brian Strickland, a state senator from McDonough.

He said Wednesday’s presentations in Macon were partly about restoring trust in the state’s voting system.

“Today, we heard from a lot of different people about this past election and what we learned from this election,” Strickland, who is also one of Gov.-elect Kemp’s floor leaders, said. "We also heard about current litigation going on so we can see the issues people see with our current system, then we continued that discussion about what the future system should look like."

Strickland added that much of the discussion was guided by public input given during the meeting.

The group has a tall task ahead of it: There are several options for replacing Georgia’s touchscreen machines, which are 16 years old.

The state could switch to paper ballots, where you fill in an oval next to a candidate’s name and then insert it into an optical scanning machine. Or something called a ballot-marking device – a touchscreen machine that prints out a paper copy of your vote with scannable bar codes.

Former Democratic Secretary of State Cathy Cox helped oversee the transition to the  current system in 2002.

Her presentation to the commission was a history lesson about past problems with voting in Georgia, and how older paper-based systems had higher rates of error and confusion.

Speaking to reporters during a break, Cox said the commission needs to select a system that considers how voters will use it.

“This commission doesn’t need to throw out the baby with the bathwater and solve one problem, i.e. security of a piece of technology, and go back to issues that create a lot of problems for voters,” Cox said.

During the public comment period in the afternoon, nearly every person that spoke wanted Georgia to use hand-marked paper ballots.   Some said it was about cost efficiency, others about security.

But for Cam T. Ashling, it was about trust in the system.

“It’s a huge problem for us to get voter turnout if we can’t convincingly tell people that ‘your vote will get counted,’" Ashling said.

But county elections officials on the panel are leaning toward using those ballot-marking devices, in part because of their similarity to the current system.

Joseph Kirk is the elections supervisor in Bartow County. He was the only public speaker opposed to paper ballots.

“I am an advocate for ballot-marking devices for all voters,” Kirk said. ”It creates a uniform voting experience, guides voters through the process and keeps ongoing costs low for local jurisdictions.”

Whatever system is selected will need to be implemented quickly.

The proposed timeline includes testing machines during local elections in 2019, to be ready in time statewide for 2020.

The commission will meet again early next month to make its final recommendations.

Lawmakers and laymen alike huddled around stacks of paper and gleaming touchscreens to test potential replacements for Georgia’s aging touchscreen...