Georgia Newspapers From Before The Civil War, Now Online 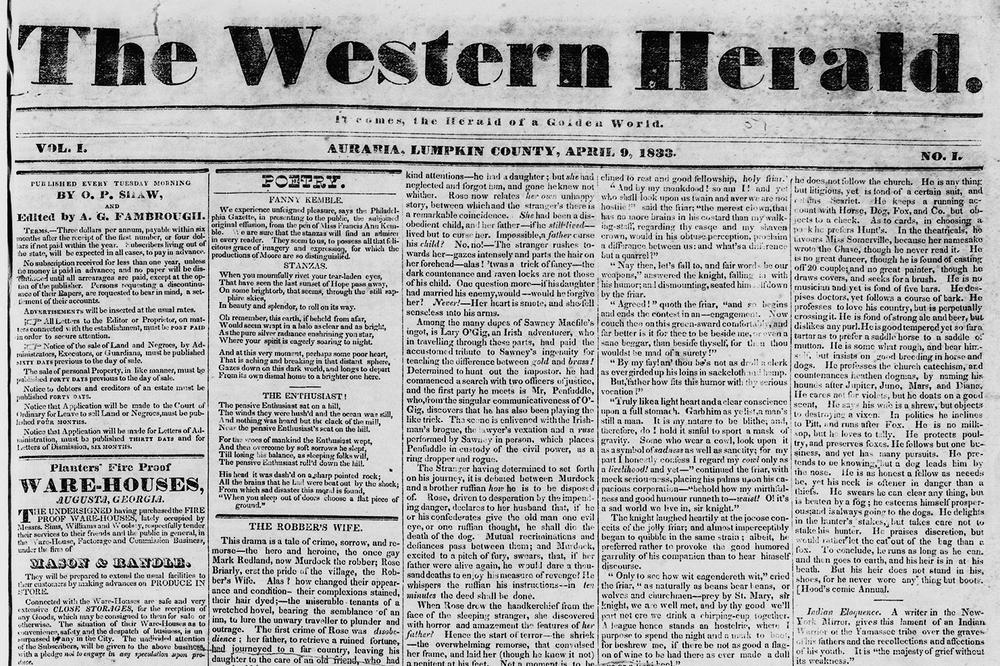 The front page of the first issue of the Western Herald, the newspaper in the gold rush town of Auraria, Georgia.

Georgia newspapers spanning the years from the end of the colonial period to the start of the Civil War have been made publicly available via the internet.

Georgia Newspapers From Before The Civil War, Now Online

The Digital Library of Georgia and the Georgia Newspaper Project digitized almost 54,000 pages of newspapers published before 1861 with the help of a grant from the R.J. Taylor Foundation. The papers range from the Royal Georgia Gazette, first published in 1779; the full run of the Cherokee Phoenix, the voice of the Cherokee Nation prior to Indian Removal; to some early African American papers.

Director of the Digital Library of Georgia Sheila McAlister said the strength of the archive is the ability to search for ideas across publications and across time.

“It really allows humanities scholars to do some really interesting work on text mining,” McAlister said. “And sort of finding finding out things like how rhetoric was used in speeches, because often speeches are published in the newspaper.”

McAlister pointed toward a project in North Carolina where their newspaper archive was used create a history of fugitive slave advertisements, providing an important window into the culture and economy of the pre-abolition South, as the an example of the kind of research made possible by the Georgia archive.

The Georgia Newspaper Project will work next with the Atlanta History Center in the spring on some never before publicly archived papers, such as the Cherokee Intelligencer, a lesser known Cherokee Nation newspaper and the first newspaper in the city of Dahlonega following Indian Removal.