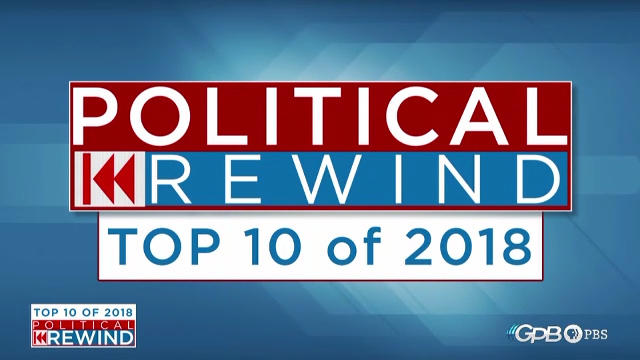 If one more political event occurs before the year’s end, 2018 may just burst at the seams.

Scandals spread from sea to shining sea, piling up one CIA investigation and allegation at a time. There have been countless state funerals and flags lowered at half mast, the country shrouded in grief as many times as scandal.

This year rattled America to the core of her partisan colors many times, and in many ways, she is still reeling.

Political Rewind host Bill Nigut sat down with experts and insiders to summarize the year in Georgia politics.

10. The Passing of Zell Miller

The former governor left a rich legacy in his wake and inspired hope in the hearts of many Georgians in more ways than one. To Atlanta Journal-Constitution political reporter Greg Bluestein that hope was personal.

“To so many of us his enduring legacy is the HOPE scholarship, and I’m one of the many students who went to UGA because of him.”

Political analyst Patricia Murphy celebrated Bottom for a relentless work ethic in the face of an office she inherited that was ridden with issues.

“What I think is really important for a politician and she obviously has that, is to bounce back from defeat and keep pushing forward and find a way. If you can’t get through the front door, go through the side door, go through a window. So she was very persistent in that and I think that’s a really good sign for her coming forward.”

With growth comes growing pains, and there seems to be construction on every metro Atlanta corner to make room for it. Bluestein asserted that transportation issues have now taken on a new meaning.

“It’s become an economic development argument because the headquarters that are moving to metro Atlanta are most likely moving near more transit lines.”

“He did kind of fill that grandfather niche. We kind of needed it. The most important thing he did was that he established a link between economic development and cultural issues.”

Patricia Murphy provided insight on the arduous road to recovery ahead after the devastating disaster.

“The worst part for Georgia farmers is that no matter how much hurricane or disaster relief that you receive, you’re rarely made whole. And so the question for a lot of these farmers is going to be how much they have in reserve, how long it will take those crops to come back.”

Although the nuclear construction plant has been the subject of much attention, Jim Galloway addressed some of the many questions surrounding it.

“Sometimes the most important news is what doesn’t happen. This is one of those cases.”

4. Women in the election cycle:

A record number of women won congressional seats this past election, shattering a glass ceiling in the process. Georgia State University Professor Amy Steigerwalt provided a more localized perspective on the feat.

“I think in terms of women in the state what we’re starting to see is a much larger growing bench of women running for office, and that is really sort of mirroring what’s going on around the country. The numbers that have gone up this past year really sort of doubled from the last election cycle.”

Subsequently, Patricia remarked how the spike in women voters and candidates has left a growing blue streak across the state.

“I would say that [the blue streak] really was driven by women voters and those suburban women voters. It’s something that to me, might even be the biggest story for Georgia in 2018 and certainly going into 2020. For the very first time in probably two decades, Georgia is starting to seem from a national perspective like a battleground state: a place where Democrats can play and have the potential to win.”

“There’s about a dozen lawsuits challenging Georgia’s voting process. If lawmakers don’t hash out these issues, then the courts will.”

It is only fitting that the top story in Georgia was one of the most talked about governor races in the country. Despite all of the controversy surrounding the election, Amy believes the real story will start when Kemp takes office.

“I think the part that is going to be interesting is that Brian Kemp previously was known as a moderate. He surprised a lot of people actually with the election that he ran, so the question is going to be, who is he going forward?”

For the rest of the country, the real question will be whether 2019 will manage to top the political intrigue of 2018. As rumors of a pending government shutdown grow increasingly loud, it would appear that 2019 is off to a head start.