Somewhere on the road between a parking lot in Forsyth County and a sports bar in Woodstock, Republican gubernatorial nominee Brian Kemp is taking a moment to relax. Less than a week from Election Day, the current secretary of state called GPB reporter Stephen Fowler to talk about closing out his bid to hold Georgia’s top elected office.

He’s relying on a bevy of Republican heavy hitters to excite voters into action. On this day, one week before the election, Gov. Nathan Deal is on the trail. Vice President Mike Pence made a trio of stops across the state on Thursday, and a final rally with President Donald Trump is set for Sunday.

The final push from Kemp continues to hammer home policies and campaign talking points focused on issues like school safety, growing the economy through cutting taxes and strengthening rural Georgia.

“Look, even businesspeople in Atlanta know it’s not good for us to just be growing in three or four cities around the state,” Kemp said. “We can’t continue to lose population in rural areas and let our communities die out where we’re literally feeding and clothing not only our own state and the country but the whole world.”

Kemp, like many Georgia politicians, speaks highly of the outgoing governor. If elected, Kemp says he plans to follow in the path of his predecessor by trying to emulate his “steady leadership.”

“You know, he's very thoughtful, and I think I've just learned that from watching him and being around him,” Kemp said. “I also had the opportunity to serve with [Republican Gov. Sonny] Perdue and saw the same thing: that they are men that think through problems and solutions and can work with people to get there to do that.”

It’s a tight race between Kemp and Democrat Stacey Abrams, and the addition of Libertarian Ted Metz means there is a danger of falling short of an outright win.

“We’ve got a great plan to turn the base out,” Kemp tells me over the phone. “I can just tell you from being on the road we’re certainly seeing that out there with the crowds, the excitement and how hard people are working on our behalf.”

One reason there’s an emphasis on turnout is because Abrams is turning out voters, too. Kemp says Democrats have been working hard in Georgia and throughout the country to mobilize the electorate, and that means his campaign needs to match that intensity.

Having the vice president and president in town certainly helps. The two Republican leaders appeal to a wide variety of conservative voters in Georgia.

“The vice president is very popular, as is the president in Georgia,” Kemp said. “Both of them have, in some ways, a different base of support and some ways it’s the same.”

For voters who may not vote in midterms, or pay much attention to state politics, support from the White House may motivate people to vote early or on Election Day. And many Georgians have. More than two million ballots have been cast already, either through mail-in absentee voting or during the in-person voting period.

Kemp’s closing message also highlights his time as a public servant, especially his controversial tenure as secretary of state. Kemp points to a record high number of Georgians on the voter rolls, online voter registration and increased voter participation as evidence he’s done his job well.

But Abrams and others say hundreds of thousands have been purged from the rolls, a strict “exact match” law can hold up registrations for minor errors and Georgia’s outdated voting machines are just a few institutional problems that make voting harder.

Kemp disagrees. He says the secretary of state’s office is a target during election years, and that his office works tirelessly to help Georgians regardless of party affiliation.

When asked whether the Kemp in provocative campaign ads might be just as provocative in the governor’s mansion, Kemp said campaigning for office is a hard business, and that he’s unapologetic about fighting to earn every Georgian’s vote.

“But when you get elected, you’ve got to govern,” Kemp said. "And, you know, my issues aren’t going to change…. I’m going to get in there and be a governor that’s going to push for the issues.”

A U.S. House committee has issued a sweeping call for documents from the governor and secretary of state to learn more about what it calls serious... 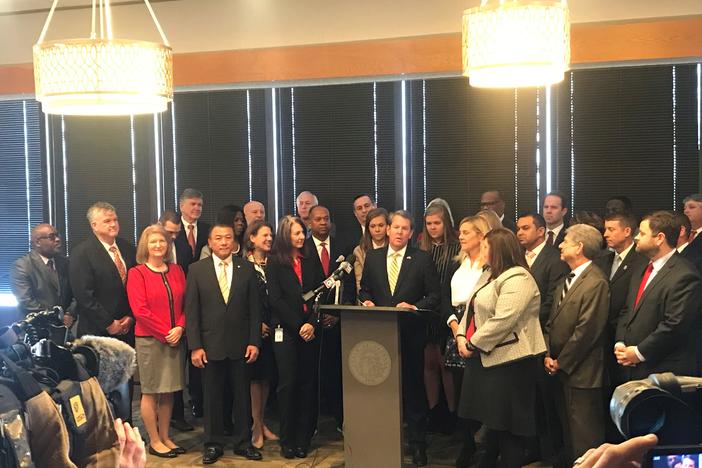 Governor-elect Brian Kemp announced members and priorities of his transition team Monday. About 40 businessmen and women, politicians, and religious...