Normally when you think of cherry blossoms, you think of Washington D.C. or Japan. But unbeknownst to a lot of tourists, Macon, Georgia is the Cherry Blossom Capital of the World. William A. Fickling Sr. discovered the distinctive blooms in his backyard in 1949. Since then, more than 350,000 Yoshino cherry trees have taken root in Macon. There's even an international festival that celebrates them, playfully nicknamed the "Pinkest Party on Earth." We talked with Macon arborist Derrick Catlett about the history and science behind these beautiful, blush-colored trees.

White, Georgia is about 45 minutes northwest of Atlanta, and home to a massive junkyard for rare and retired vehicles. What started as a car dealership in 1931 is now the final resting place for more than 4,000 cars. On Second Thought producer Sean Powers drove up to Old Car City USA and visited the massive junkyard.

For Women’s History Month, On Second Thought is paying tribute to Georgia's female trailblazers. Civil Rights icon Roslyn Pope made history in 1960 when, as a student at Spelman College, she wrote “An Appeal for Human Rights." The document was instrumental in advancing the Atlanta Student Movement's efforts to end segregation. On Second Thought producer Fenly Foxen spoke with Pope about her experiences as a student leader in the Civil Rights Movement.

We ended our Friday morning show with the Breakroom gang to talk about the week's top stories. Joining our discussion were Ed Sohn, the Vice President for Product Management and Partnership at Thomson Reuters, Georgia State University professor Hector Fernandez, Kalena Boller, host of "The Credits" podcast, and former NPR correspondent Kathy Lohr.

The face of local news in Macon, Georgia, is changing. After nearly four decades, Friday is Oby Brown's last day at The Telegraph in Macon. Brown's... 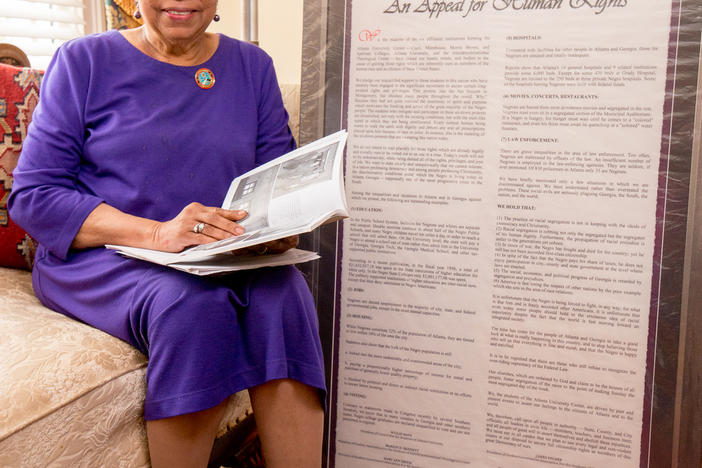 Dr. Roslyn Pope Reflects On 'An Appeal for Human Rights'