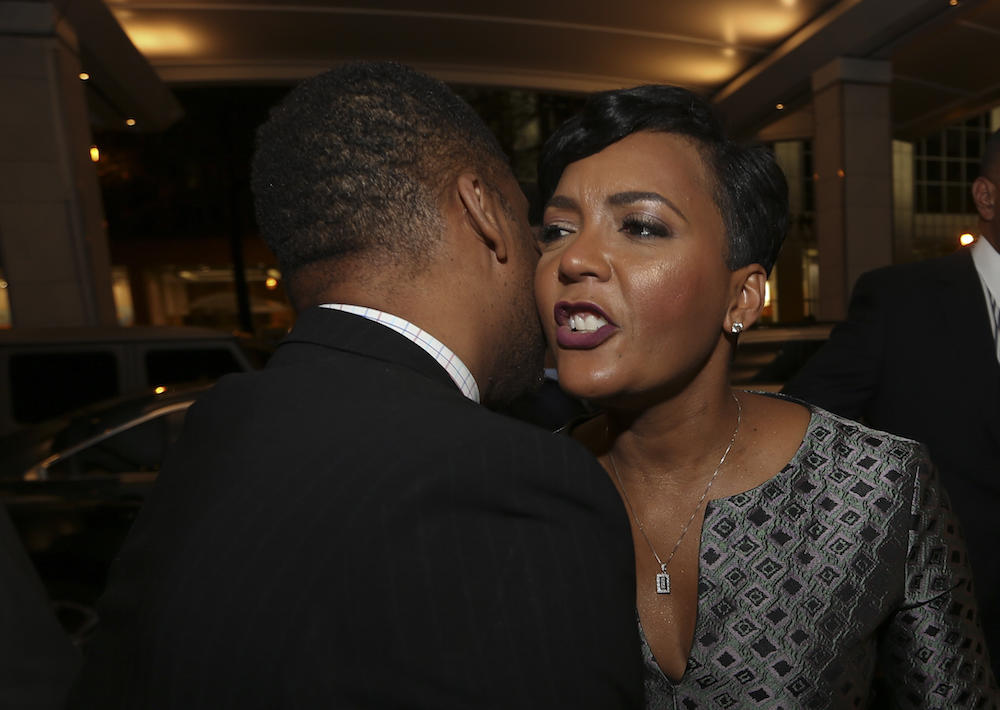 Atlanta mayoral candidate Keisha Lance Bottoms is greeted by a well-wisher as she arrives for an election-night watch party Tuesday, Dec. 5, 2017, in Atlanta.

Fewer than 800 votes separated Bottoms from Norwood after more than 92,000 ballots were tallied.

Echoing the Atlanta mayoral election of 2009, when current Atlanta mayor Kasim Reed defeated Norwood by a similarly narrow margin, Bottoms declared victory to a crowd of supporters at an election-watch party in downtown Atlanta.

"I'm so honored to be your 60th mayor," Bottoms told the crowd.

Under Georgia state law, if the margin of victory is less than one percent, the second-place finisher can request a recount. Norwood plans to pursue that path.

“It’s not over,” she told supporters. ”I’ve done this before. Next few days will be all hands on deck.”

Citing uncounted military absentee ballots and provisional ballots that have yet to be counted, Norwood emphasized that the race could not yet be called.

Both women are city council members. Bottoms, who is black and the chosen successor of Reed, is widely seen as a continuation of the black political machine that has dominated Atlanta politics since the mid-1970s. Norwood, who is white, would be Atlanta’s first white female mayor.

Although race has had an inescapable presence in the hard-fought election, issues such as bureaucratic corruption, affordable housing, and transportation played a large role in the discourse of the campaign. Amid shifting demographics in the Southern city that has attracted a younger, wealthier population than the rest of the state over the past decades, the possibility of a self-described “progressive independent” like Norwood being elected as mayor seemed possible.

Bottoms, a Democrat, would continue the party’s lock on the mayor’s office going back to 1879.

The remaining ballots are expected to be tallied by Thursday, Dec. 6.

Atlanta's two-person mayoral runoff election is too close to call.

Bottoms leads Norwood by a margin of less than 1 percent, which is the threshold where the second-place finisher can request a recount under state law.

Norwood told reporters she intended to seek a recount.

With 100 percent of precincts reporting, Bottoms leads Norwood by 759 votes.

Voters in Atlanta were choosing Tuesday between two women to be the next mayor, testing the staying power of a long-dominant black political machine amid profound demographic and economic changes.

Polls closed at 8 p.m., and results were not expected until late Tuesday night.

A victory for Bottoms, 47, would continue a run of African-American mayors that began with Maynard Jackson in the mid-1970s.

A win for Norwood, 65, would give Atlanta its first-ever white female mayor, and end the Democratic Party's hold on an office it has held without interruption since 1879.

A half-century after white flight led to sprawl that fueled legendary traffic jams, Atlanta is booming economically and growing at a breakneck pace, with townhouses and apartments going up in vacant lots all over town. Parts of the city are more diverse, younger and wealthier than they have been in years.

Political analysts have said African-American voters will ultimately determine the outcome, but many of the city's most formidable challenges transcend race.

Everyone seems to care about transportation, public safety and affordable housing. As rents and home prices soar, some longtime residents struggle to stay in their neighborhoods, and face no easy commutes if they move out.

"We're behind the times in terms of having a modern transportation system compared to what you see in New York or Washington," said Kendra A. King Momon, professor of politics at Oglethorpe University in Atlanta.

"It impacts quality of life because most of us don't know what we're going to run into when we head into the city," she said of Atlanta's notorious traffic jams. "That's a huge issue that we have to address."

A big question is whether an ongoing federal probe of corruption in city contracting under Reed's watch will encourage voters to take a fresh look at Norwood, despite fears that as an independent who lives in the upscale Buckhead area of the city, she'll turn out to be a stealth Republican who will serve up City Hall to Georgia's deep-red political apparatus.

As voters went to the polls on Tuesday, none spoke openly of race.

"Just listening to Keisha and comparing what she said to the words of Ms. Norwood, I felt like she shared my values more," said Barbara McFarlin, a 50-year-old black woman who lives in the southwest Atlanta district Bottoms has represented on the city council.

James Parson, a 49-year-old black man who also lives in Bottoms' district, said he's been friends with Norwood for three decades and appreciates how she's made herself available to constituents all over the city as an at-large council member.

"I love that Mary is connected to most of the communities in Atlanta, if not all of them," he said. "She's approachable. She has been here. She's no Johnny-come-lately."

Atlanta's last white mayor, Sam Massell, left office in 1974 and was succeeded by five African-American mayors in the next four decades: Jackson, Andrew Young, Bill Campbell, Shirley Franklin and Reed. Regardless of who wins, Atlanta will have its second female mayor, following Franklin who left office in 2010.

Jeffrey Brower, 45, a white man who lives in the East Atlanta neighborhood, said he voted for Norwood, but that his vote was more a vote against Bottoms and Reed. Bottoms is too close to Reed and would be like an extension of the current administration, he said.

Polls have closed in Georgia's elections, which include the final contest for Atlanta mayor and a handful of runoffs to fill open seats in the General Assembly.

In Atlanta, voters Tuesday were deciding between Keisha Lance Bottoms and Mary Norwood for mayor.

In the Georgia General Assembly, four runoffs were held for seats left vacant when their occupants left the statehouse to run for other political offices.

All of the legislative contests involved Democrats.

Voters in Tuesday's runoff for Atlanta mayor are deciding between Mary Norwood and Keisha Lance Bottoms.

If Norwood wins, Atlanta would have its first-ever white female mayor.

A victory by Bottoms would continue what has been called the city's black political machine, which has dominated the mayor's office since the mid-1970s.

Regardless of who wins the runoff, Atlanta will have its first female mayor since 2010, when former mayor Franklin left office.

If Mary Norwood (right) wins, Atlanta would have its first-ever white female mayor. A victory by Keisha Lance Bottoms would continue what has been called the city's black political machine, which has dominated the mayor's office since the mid-1970s.