How Should Georgia Handle Its Confederate Monuments? 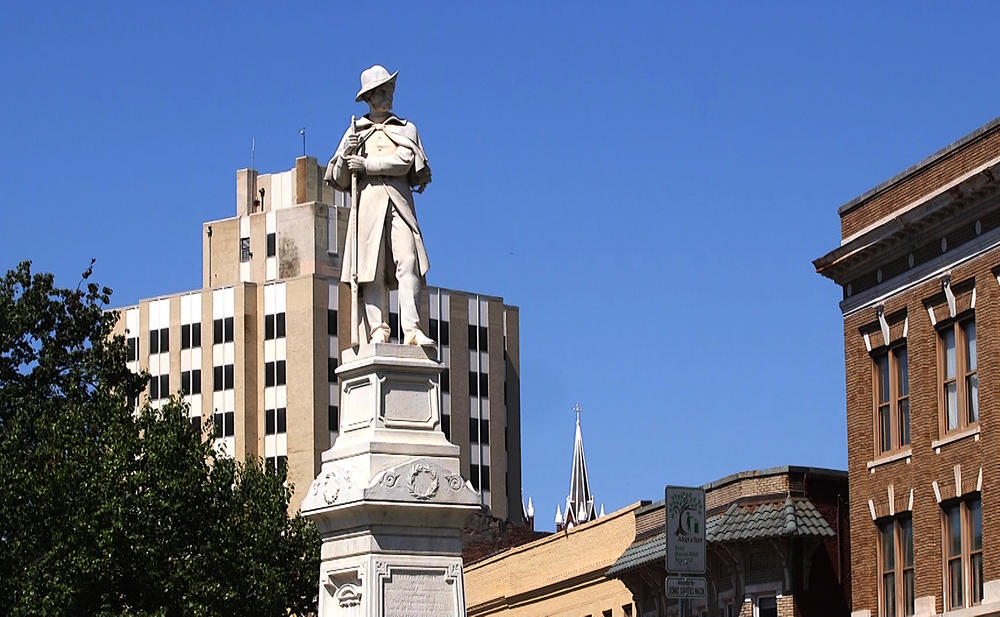 The Civil War monument at the intersection of Second Street and Cotton Avenue in Macon was erected in 1879 as a memorial to the Macon citizens who were killed fighting for the Confederacy.

As politicians and activists call for the removal of Confederate monuments across Georgia, an Atlanta historian says there’s another possible solution: add historical context.
“If you don’t take them down, then you must contextualize them,” said Sheffield Hale, CEO of the Atlanta History Center.
Last year, the center launched a set of tools showing communities how to add additional information to their Confederate monuments.
The main idea is to explain the Lost Cause narrative--the idea that white southerners fought for a just cause in the Civil War--that led to the erection of statues across the south years after the conflict.
“The idea was to give research notes to really explain the history of these monuments and a template that they could use as a basis for starting a conversation in their community about their monument,” Hale said.
In the time since it’s launch, Hale says it’s been used by communities from Texas to Maryland.
There is no shortage of opportunities. The Southern Poverty Law Center estimates that there at least 1,500 public monuments to the Confederacy across the country, many of them in the South.
The list not only includes highly visible memorials, like the carving of Robert E. Lee and others on Stone Mountain, but less visible relics like parks, highways, and schools named after Confederate leaders.
One such monument stands in the heart of Macon, where county leaders are currently discussing whether or not to move the statue of a Confederate soldier to a different location.
“I don’t think they should move it,” said Timothy Poole. “It seems like to me--it looks like he’s representing Macon, like he’s been fighting for something. He’s got his rifle and everything.”
Poole says he’s used to seeing the monument. He’s African-American and grew up in Macon. The same is true for Calvin Watkins, Sr. Though he’s got a different take on the statue.
“For my part, really? I think it needs to come down,” he said.
https://www.youtube.com/watch?v=lAP1wF9iIns
The issue has inspired a robust debate among members of the public and county officials, including the oft-heard argument that removing the statue will somehow erase history.
That argument doesn’t do much for Stan Deaton, an historian with the Georgia Historical Society.
“That’s to say, 'Well, gosh, we didn’t know anything about Robert E. Lee until they put that statue up.' That’s nonsense and we know that. If it disappeared, I could still learn about him,” he said.
Deaton says the recent unrest surrounding the removal of Confederate monuments can be traced back to the civil rights movement.
That’s when black Americans’ push for equality led to larger discussions about the true causes of the Civil War.
“And I think we’re seeing that in almost fast-forward motion right now,” Deaton said.
Sheffield Hale, with the Atlanta History Center, feels those conversations can be productive.

He says he’d like to see more discussions about how communities want to handle their monuments–whether that means taking them down or putting them in context.
Still, Hale acknowledges the process won’t be easy, and that it certainly won’t be quick.
“These monuments took 150 years to put up,” he said. “They’re not all going to be contextualized or come down immediately.”

Grant Blankenship and Cindy Hill contributed to this report.