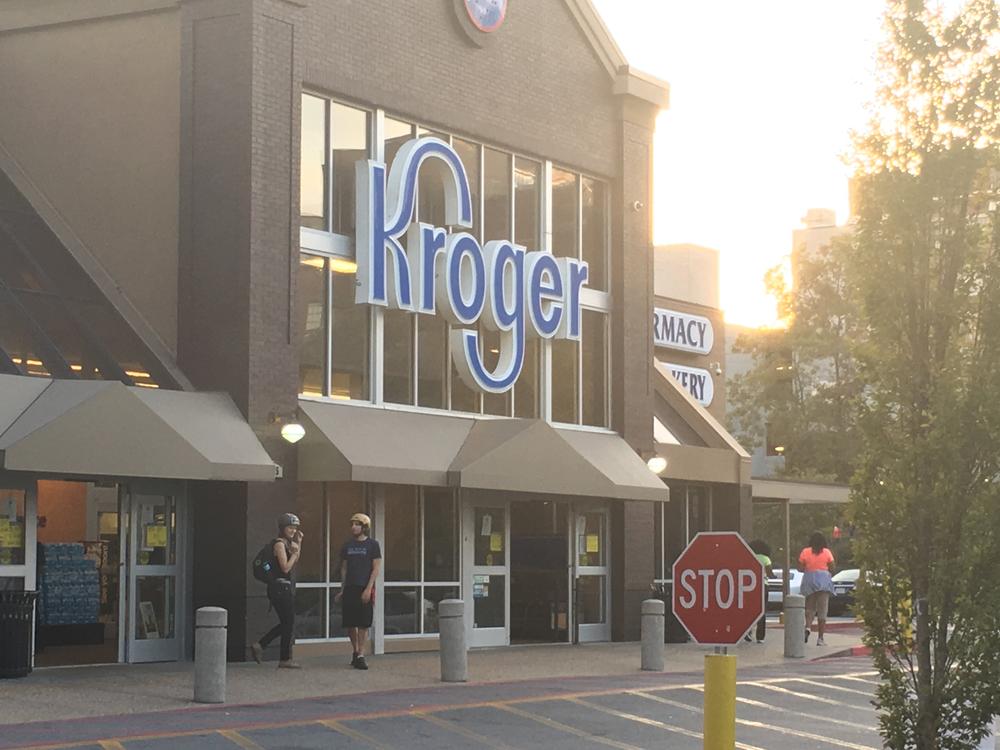 Atlanta may see a first: Tonight thousands of people may come to a candlelight vigil for a grocery store.

Rickey Bevington: So let's begin with why many Atlantans call this supermarket "Murder Kroger."

Stephen Fowler: Murder Kroger. It's been the subject of articles, songs, and even its own Wikipedia page. In 1991 a woman was shot and killed in the parking lot. The AJC then called it "Scary Kroger," but eventually it morphed into "Murder" instead.

In 2002 someone found a dead body in the parking lot. Most recently a man was shot outside the building in 2015 where he later died. So it's not exactly a death trap to go buy some sugar, but like Atlanta traffic and anything named Peachtree, the name stuck.

A few years ago the murder Kroger got a makeover and officials tried to get the name "Beltline Kroger" to catch on with little success.

Bevington: So this nicknaming of Krogers seems unique to Atlanta. Here's just a few samplings of names we have: "Disco Kroger." "Fiesta Kroger." "Kosher Kroger." "Hipster Kroger." "Stinky Kroger." What is going on here?

Fowler: So the first name is the "Disco Kroger" in Buckhead. That was named because of a late night disco club that happened to be next to where you could get your simple groceries. I shop at the "Kosher Kroger" in Toco Hills over in the Druid Hills area. It's got a big selection of Kosher food, halal food, you know, people with different dietary restrictions. My personal favorite is the "Stinky Kroger" in Roswell.  It's right next to a waste-treatment plant.

Atlantans love their nicknames but they love their Krogers just as much.

Bevington: So tell me more about this Facebook event called "CandleLIT Vigil For Murder Kroger" tonight.

Fowler: So I've seen a few people in the parking lot kind of milling around waiting. The Kroger staff actually ordered six port-a-potties in the corner for the crowds anticipated. There's over 3,000 people interested on Facebook for an event that few Georgia State students started as kind of a joke.

But they're asking for people to bring in donations to the Atlanta Community Food Bank while they're there as, you know, kind of a nice touch to do something for the community. Even though the cover photo for the event has a silhouette of Harambe the dead gorilla and an Applebee's logo, this event is actually serious - but not sanctioned by Kroger.

You can also get a murder Kroger shirt on Amazon, I'd like to add.

Fowler: I mean this is the "Murder Kroger" the day before is closed for good. There are still people coming around. It went from 24 hours to being open until 1:00 a.m. But the shelves are empty. People shop here. People care. And the lack of it will be missed.

It's interesting. I'm sitting here next to Ponce City Market next to the BeltLine, next to all these places filled with cars and people and everything like that. This Kroger represents a vestigial structure of a different Atlanta than what's being marketed and seen today.

Shaquille O'Neal bought the Krispy Kreme down the street, the Kodak building across the street will be converted into a wellness center, and the Masquerade right behind us is being turned into a multi-million dollar mixed-use development.

The face of this side of town is definitely changing.