Can Kids Be Scared Straight? 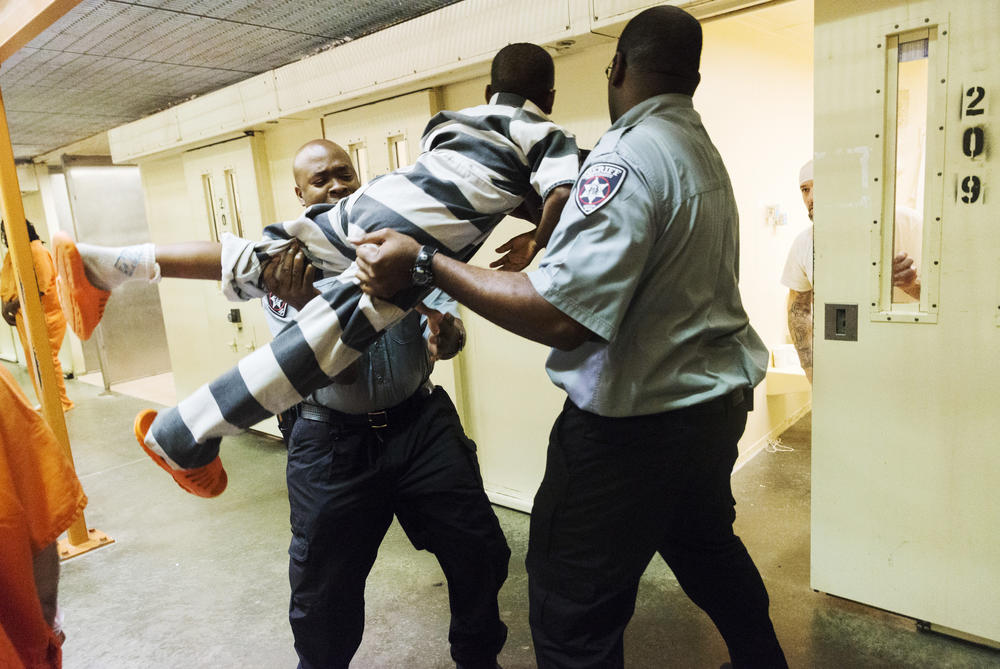 Caption
A nine-year-old boy is lifted and forced through a cell door at the Bibb County Jail during the Consider the Consequences youth intervention program recently.

At the inmate’s direction, the children drop to the floor.

A new command, just as fast.

The kids can’t keep up. They aren’t meant to. Pretty soon it’s obvious that many of these kids, especially the ones who are not yet teenagers, are terrified.

Can Kids Be Scared Straight?

This is the "Consider the Consequences" program at the Bibb County Law Enforcement Center in Macon. It’s a youth intervention program a little over a year old now modeled on the Scared Straight programs which were initially made popular by the original “Scared Straight!” documentary that aired on PBS in the late 1970s.

These are kids who for one reason or another have driven their parents, grandparents or guardians to the end of their ropes. Before turning over their kids to the program, parents were invited to share with the group, parents and kids alike, their list of problems.

“Disrespectful, being suspended multiple times, in-school suspension, stealing and don’t want to mind,” one mother said. “He bought some brass knuckles from another child but he got caught with them.”

Lieutenant Ellis Sinclair of the Bibb County Sheriff’s Office runs this intervention program. He wants to change behavior like this before children in trouble become adults in jail.

“And when I say change the behavior we're not really into the scaring business,” Ellis said.

Ellis said this is about something else entirely.

So call this tough love. As popular as these programs have been over the 35 years since the original “Scared Straight!” documentary, a question remains: how effective is this brand of tough love at keeping kids out of jail?

Paul Klenowski is a criminologist at Clarion University in Pennsylvania. As a kid, he watched that old documentary on PBS. Later, as a doctoral student he couldn’t shake the memory of what it promised.

“This this idea touting a reduction rate of recidivism by 80 percent always stuck in the back of my mind,” he said.

So with his research partners Keith Bell and Kimberly Dodson, he decided to see if the decades of science conducted around Scared Straight programs bore that number out, to see if fear was in fact a tool for changing a kid’s behavior. After looking at a dozen different studies, the answer was stark.

“The fear arousal approach does not work,” Klenowski said.

What was made plain across those dozen studies was that a child was more likely to go to jail as an adult if they had been through a Scared Straight program. How much more?

“We're seeing an increase anywhere between 15 to 28 percent,” Klenowski said.

Nowhere did they find evidence that scaring children in jails ever had a positive effect. At best it did nothing. Their findings were published in the Journal of Offender Rehabilitation in 2010.

Later in the "Consider the Consequences" program, the children are led into the main area of the jail. Cell doors are open, inmates are in their faces. The sound of the screaming adults and the children screaming in return is at times deafening.

One nine-year-old boy is lifted by a pair of jail guards and shoved head first into an open cell with an inmate waiting inside. He tries as hard as he can to stay out.

Later the boys are in a cell together eating their lunch of bologna sandwiches and an apple. The boys talk about who they saw in the jail that they already knew. Someone mentions a cousin. The nine-year-old says he saw his dad for the first time in seven years.

Over in the female block, a 13-year-old girl whose mother was worried she was sexually active had been grilled by inmates. The girl has been sending sexually explicit texts.

The inmate is only 17 herself. She has a five-year-old son.

A camera crew from a syndicated TV show captures it all.

Paul Klenowski doesn’t see how this helps. After all, many of these kids already come from chaotic homes.

“Confrontation does not work especially because many of these children are already survivors,” he said.

Klenowski says there are youth intervention programs that show real promise. Instead of the shock and awe of prison tours, these programs usually involve calm and often frank talk with inmates.

“The inmates being able to have a conversation with them and say listen you do not want to end up here like me. And let me tell you why,” he said.

There is some of that in this program, but only after a far longer period of intentional fear.

Bibb County Sheriff David Davis has seen the story the TV crew put together, which included the boy being shoved into the cell. He’s also seen the reaction to the show on social media. That’s been mostly positive.

“We had a call from someone in Ohio this morning was wanting to know if there was a way that they could get their child to participate in in one of our upcoming sessions,” he said.

He said scaring kids is the cornerstone of his program.

“I think it serves a purpose,” he said. “But it's just one little piece of the bigger puzzle.”

The rest of the puzzle is a year of life skills classes for children and parents alike. Paul Klenowski says that part sounds good. But what he would love is for criminologists like himself to be invited inside Scared Straight programs to help out.

Sheriff Davis said he already has experts steering the program.

“Counselors and people who have been down this road and people that know parenting and behavioral modification and all those kinds of things,” he said. “So we're open to anybody that wants to come in and help us with this program.”

Bibb County Georgia’s "Consider the Consequences" program takes in a new class of young people one Friday every month. 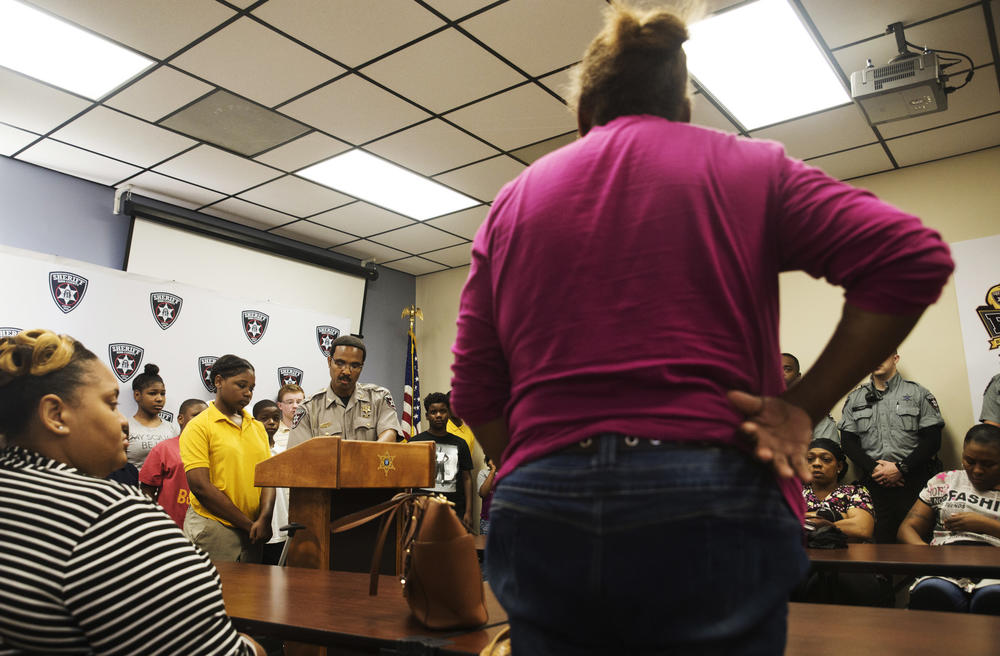 Caption
Parents reel off a litany of reasons why they want their kids to spend a day in the county jail before turning them over to jail guards.

Caption
An inmate with a boy in the "Consider the Consequences" program, left. The same boy a few minutes later. 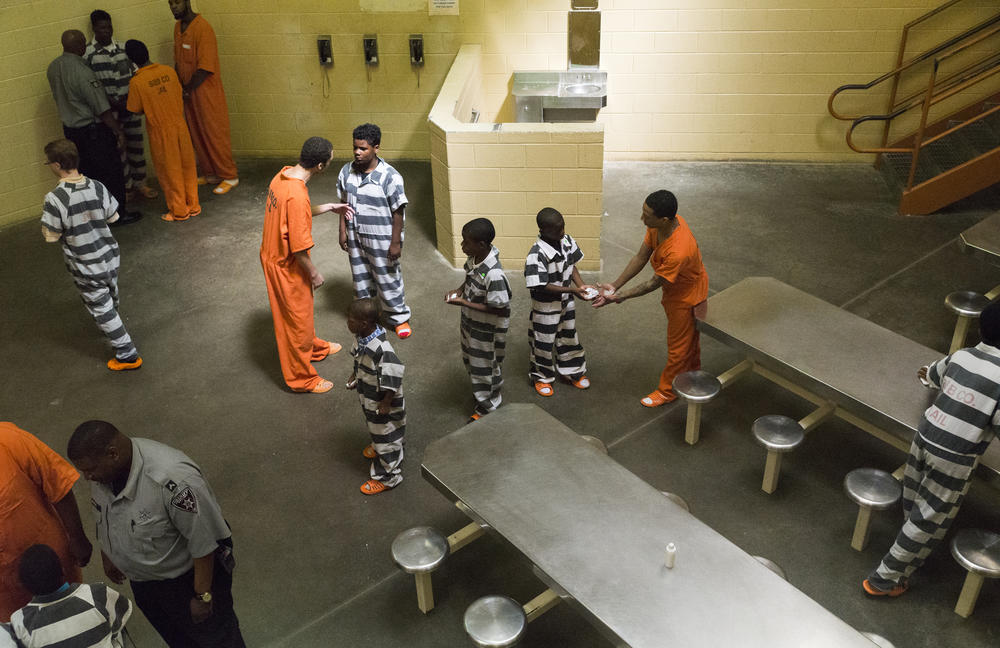 Caption
After their jail tour, program participants are made to write apologetic essays they will later read aloud to the adults who brought them to the program. 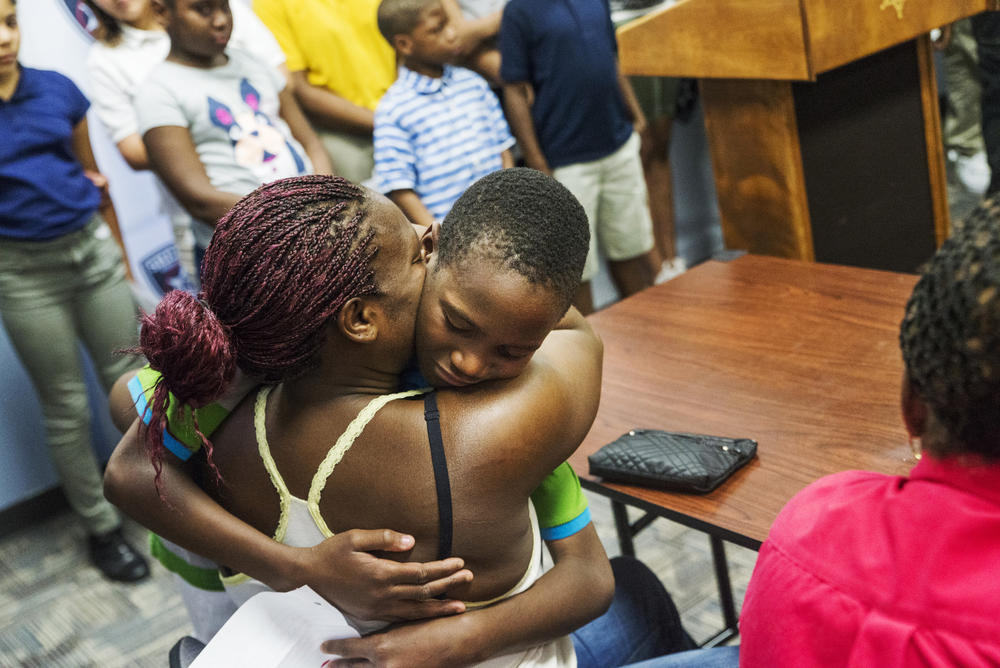 Caption
A boy is reunited with his mother at the end of the "Consider the Consequences" youth intervention program at the Bibb County Law Enforcement Center.
Tags: justice  Criminal Justice  Education  Georgia  Macon 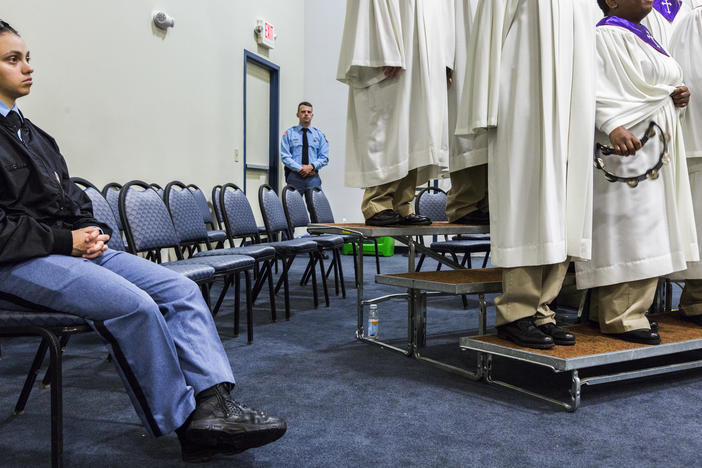