Gun Bill: Some Small Changes, Some Large Ones 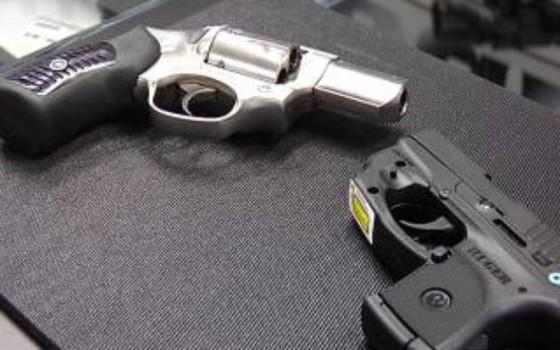 One of the most controversial bills awaiting Governor Nathan Deal’s signature is one that would expand where guns can be carried.

The bill took a circuitous path through the legislature, picking up provisions, then losing them.

Later two gun bills were combined, and the measure went back and forth between the two chambers.

It might be easier to start with what it won’t include: a provision known as campus carry.

Gun advocates have been pushing for the right to bring firearms on university campuses. But college presidents, the state’s Board of Regents and others oppose that provision, and it was dropped.

Jerry Henry is with GeorgiaCarry.org, the lead group that lobbied state lawmakers to pass the gun bill. He said his group will continue to push for that provision. And that’s because licensed gun owners want to see uniform rules for carrying firearms on private property.

“We don’t want to have to guess if it’s legal or illegal to bring a gun somewhere,” he said. “There are still lots of ‘gotcha’ places in the law.”

As for lobbying next year for the campus carry provision, that’s part and parcel of GeorgiaCarry’s mission.

“We ask for what we want, we take what we can get, and we come back for more,” Henry said. “Six to eight years ago, there were very few places you carry a gun in Georgia.”

With Henry’s help, that’s changed. Under the new bill, schools would have the option of deciding if teachers or administrators should be armed. The state would have to report within 10 days Georgians’ involuntary commitments to hospitals.

In addition, most unsecured government buildings would be open to guns, if Deal signs the law. That’s a concern for county commissioners who can’t afford metal detectors.

Another provision would bar sheriffs from asking someone with a gun if he or she has a license. Putnam County Sheriff Howard Sills says that essentially invalidates Georgia’s gun licensing process.

Henry, however, defends the provision, saying the U.S. Supreme Court has ruled “the presence of guns doesn’t mean a crime has been committed or is about to be committed.”

“The guy has to be doing something illegal so this doesn’t change anything,” Henry says. “It’s not going to let any felons go.”

There are other small changes in the bill, but the main difference if it becomes law involves churches. Namely, clergy would have the option of deciding to allow guns in their houses of worship.

Henry says 440 people have been killed in attacks on church property in the U.S. since 1999.

But some say churches face relatively little risk of gunmen.

Nadim Ali is the imam at the Community Masjid in Atlanta. In an interview, he said his mosque has security personnel who carry guns, largely in response to attacks on mosques and because of drug dealing nearby. The mosque doesn’t allow guns in the sanctuary.

“There has been destruction of mosques around the country so it is not so much perception as reality with the mosques,” he said. “But there have not been many attacks at churches.”

Ali also said security shouldn’t be left up to members, or be a casual operation.

“I don’t think members, just in general. I think if they are going to do that, they should have designed people who are in charge of security,” he said. “We’re not anti-gun advocates but we’re responsible gun advocates.”

Deal hasn’t signed the bill yet, and during the session he said it wasn’t part of his agenda. But few expect him to veto it. He typically signals to lawmakers privately if he will veto a bill – long before it lands on his desk. And the provisions he didn’t like were removed or softened.

Political strategist Mark Rountree says he doesn’t expect the gun bill to become a campaign issue. That’s largely because the Democratic challenger, Jason Carter, voted for the bill. And few Georgians back tightening restrictions on guns.

“Gun control supporters have very little support in this state – in either political party, for that matter,” he said. “There are not a whole lot of people voting on the issue of restricting guns.”

Those who favor loosening restrictions, on the other hand, are unified and motivated. Just ask Jerry Henry at GeorgiaCarry. He’s already planning for the next legislative session beginning in January.