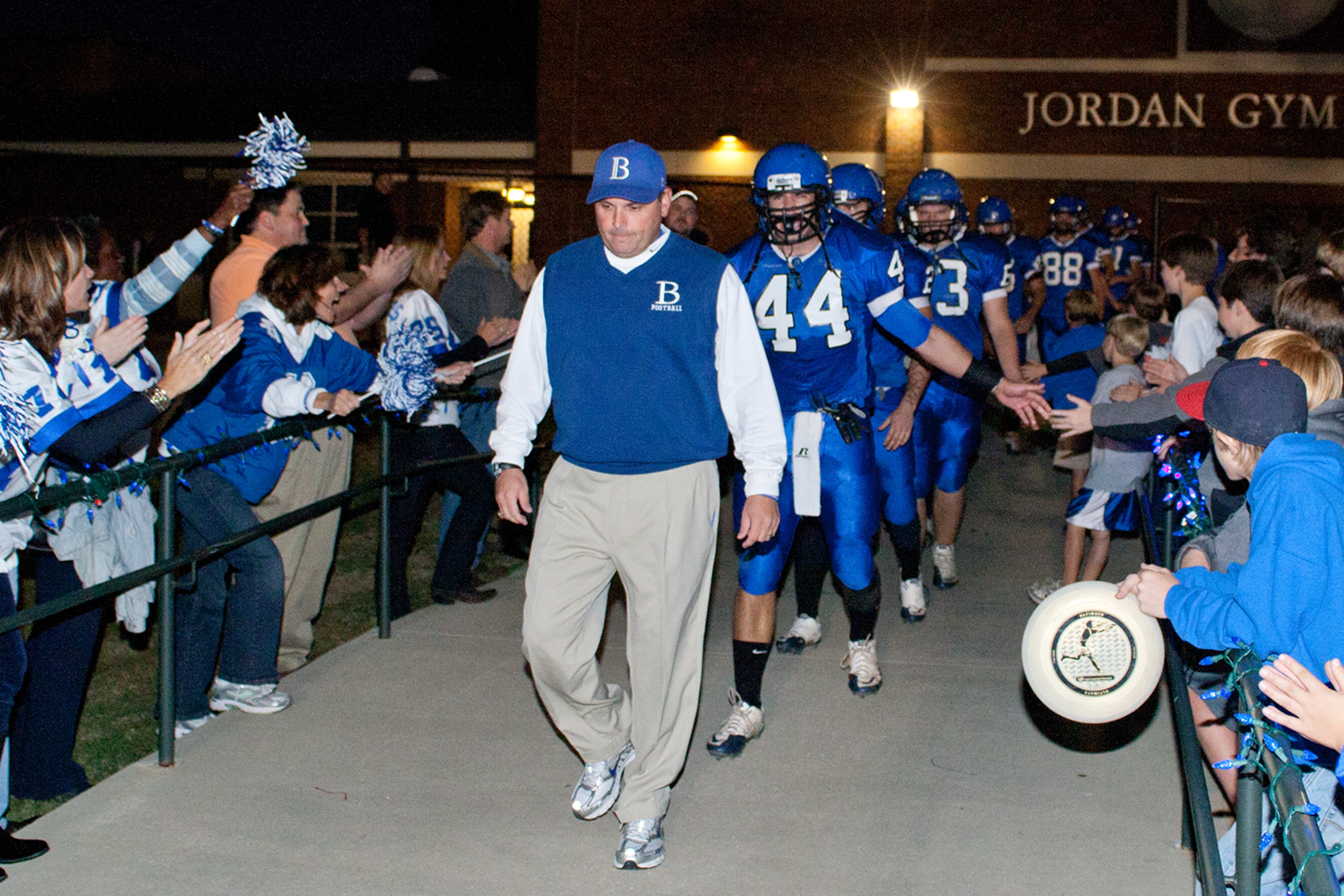 Caption
Blair Harrison was the head football coach at Brookstone School for 14 years. He's pictured here making the Cougar Walk to the field before a Friday night game in Columbus.
Credit: Blair Harrison 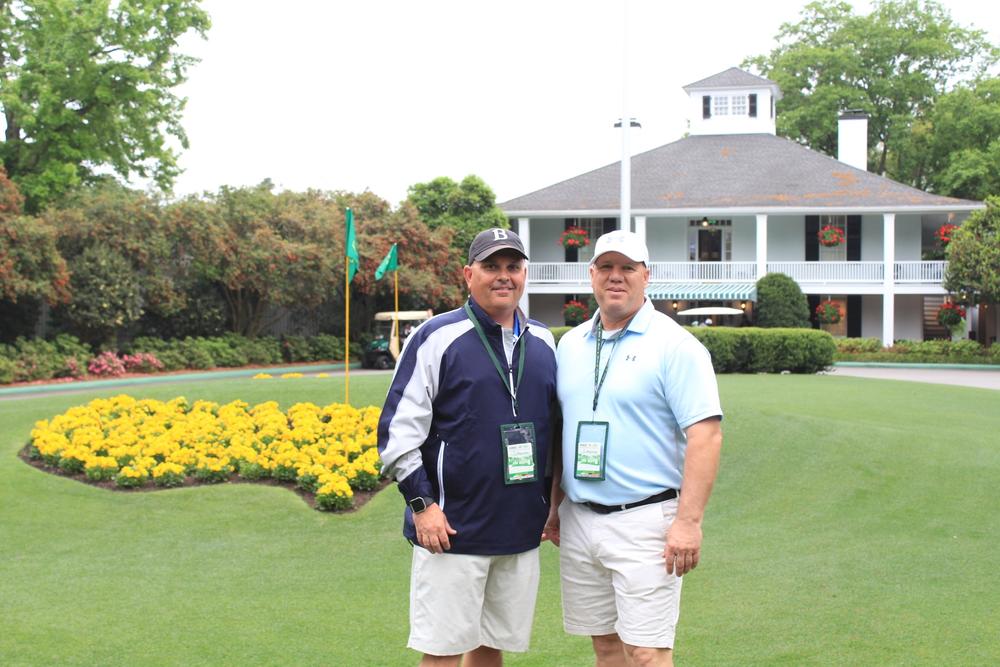 Blair Harrison pictured with Al Pellegrino (right) at the 2019 Masters in Augusta, GA.

Pellegrino was at the helm of the Shaw program for the past five seasons with a 16-34 overall record. He and Harrison had been longtime friends. Harrison will assume the interim role of athletic director in addition to head coach. He and the school agreed to wait to make a permanent decision on his role and the future of the program in December.

Harrison spent most of his coaching career just up the road at Brookstone School until the two decided to mutually part ways. Harrison led the Cougars to an overall record of 104-55 over 14 seasons but he was struggling to find the meaning of it all and knew a greater purpose was on the horizon. That purpose ended up coming a lot sooner than expected.

This is not your typical new head coaching position, but Harrison said his players are resilient. He's already working on implementing "his way” with the team while honoring Coach Pellegrino’s legacy. He said he thinks Pellegrino would be proud that he's stepped in and tried to keep the Raiders moving forward.

Find out more about coach Harrison’s reaction to the tragic news, his departure from Brookstone, and new plans for Shaw football in the full video interview with GPB’s Hannah Goodin:

Hannah Goodin: Today we are spotlighting Shaw High School interim head coach and athletic director Blair Harrison. Coach, thanks so much for joining me today. Quite the story there in Columbus. A lot going on since former head coach Al Pellegrino passed while on vacation with his family over Memorial Day weekend. What was it like for you getting the news?

Coach Harrison: Just unbelievable. I received a text the morning I woke up and didn't believe it. I had to reach out. Didn't even know who the text came from. So, of course, you know, I knew someone probably wouldn't joke like that, but you hope it's a joke, but then you're mad that somebody would even think that was funny. But when I got to the bottom of it and we found out that it was true, just shock. And just to be honest, I'm still in shock.

Hannah Goodin: What was your relationship like with Coach Pellegrino and what do you think he'd be saying to you right now?

Coach Harrison: That's a tough question. He probably be mad at me right now. I'm probably not doing everything the way that he would want it done, and I'm probably not as organized as he'd want me to be or as tough on these guys as he was. You know, he did it his way and I respected that, and I knew that coming in. But I think he'd also be proud that I've stepped in and tried to keep this going forward. And I think he would have wanted me to. And, you know, so I'm proud that I can at least help carry on his legacy here at Shaw.

Hannah Goodin: You were the longtime coach at Brookstone for 14 years there. Then Coach Pellegrino brought you on as the offensive coordinator there in January at Shaw. What was it like being thrust back into the head coaching role so abruptly?

Coach Harrison: Well, to be honest, that wasn't the plan. I was really enjoying being an assistant. It's been something that I guess is just nature. You just pick up where you left off. I was a little bit more relaxed as the offensive coordinator, but now everything is on my shoulders, so it's a little bit more pressure. But, you know, it wasn't what I was looking for at the time but I do understand why I'm here and I do understand, you know, what my goals are, and I'm really appreciative of the opportunity.

Hannah Goodin: This is not your typical new head coaching position. What has this past month been like for you and what's been your message to the team?

Coach Harrison: The last month has been great. The kids are so resilient and so great. The message is we're just going to keep continue building the program that he started building six years ago. And we're still trying to do it with things that he implemented. I am starting to bring in my way a little bit because I just think that it's not fair to me to try to coach around another style. So I am going to do it my way, but we're always going to remember him and we're also doing it for him.

Hannah Goodin: Well, that's why ultimately you left Brookstone is because you wanted to run an offense your way. Tell me about your way.

Coach Harrison: You know, I think it's I think that my way would be defined as is I want to win a game. I want to win ballgames and we won a lot of games at Brookstone. We won well over 100 games when I was there. I'm going to control the football and I'm not going to, you know, I don't want to making mistakes and I don't want to give the ball back, you know, with tip passes or sack quarterbacks or, you know, just not taking care of the football. So we're going to protect the football. I like to throw it when we when we when we can when we have available, when they're giving it to us. But we want to we want to control the clock. And I just feel like that the way I do things helps us win games.

Hannah Goodin: You still have a lot of ties to Brookstone. Your sons, Blair and Brewton, both go there, your wife is an alum from there and your mother-in-law just retired. So what is that going to be like being 10 minutes down the street from a school that you were at for so long?

Coach Harrison: You know, be honest, it's hard. I love Brookstone School. They've done a lot for me and my family over the years, and my kids just love going to school every day. And that's something that my wife and I have talked about, you know, endlessly trying to figure out what we should do. And we've got them in the right place for them. And, you know, just unfortunately, they don't get to come down to Dad's office or eat lunch with me anymore. But, you know, they're resilient as well and they've moved on and, you know, they're going to support their school and going to do the best we can. But we're Shaw Raiders and we're proud of it.

Hannah Goodin: Well, let's talk about the Shaw Raiders. You have a dead week coming up, but what have you learned about the team? What's next? How is it all gelling?

Coach Harrison: You know, we're still trying to piece together a staff and it's changing daily. Our guys are coming and going a little bit more than we would like. But we hope that July settles down and that we can get everybody here. But, you know, we're averaging, you know, 55 to 60 kids a day working out and practicing with us. That's a good thing, I believe. We are a big school, so we should have good numbers. But the gelling is they're coming together. They're starting to understand how I want it done. We still have to remind them all the time, but it's changing, and we think it's changing for the good.

Hannah Goodin: So coming off a 3-and-7 year with Coach Pellegrino. What is your plan for this season and what can we expect from you on the field?

Coach Harrison: Well, you know, I hope that we can compete every down. We're going to do two scrimmages, which I think is going to be vital because the first scrimmage will probably not be that that well executed on our part. But we hope we can make some changes by the second scrimmage, and by the first game I hope we're ready to go. So, you know, we definitely want to improve on 3-and-7. I think we have a great opportunity. I think we have a great opportunity to get to the playoffs for the first time in years, and that's our goals. And I think that I think that we're going to reach them.

Hannah Goodin: All right. Well, your first game at home against Marion County on August 19th. We cannot wait to see what you do this year and your team. And when will you make an official decision about your head coaching position there because you are still the interim?

Coach Harrison: You know, I think that both parties, the school administration and myself, we both agree that the interim situation is the best for both of us. I think that going forward, as soon as the season's over before Christmas for both of us would be the best time to decide which way we're going to go. So, both parties have a chance to, you know, make decisions. But right now, you know, I would see no reason for me not to be here. I love it. I love coming to work every day and I think that so far, everybody likes what they're getting out of me. So, you know, I would say going forward, we're going to be at Shaw and, you know, we'll just make it official after the season.

Hannah Goodin: Well, I think Coach Pellegrino would be very proud of you. Thank you so much for your time, Coach Harrison, and I really appreciate this and look forward to catching up with you later this fall.

Coach Harrison: Thank you so much.