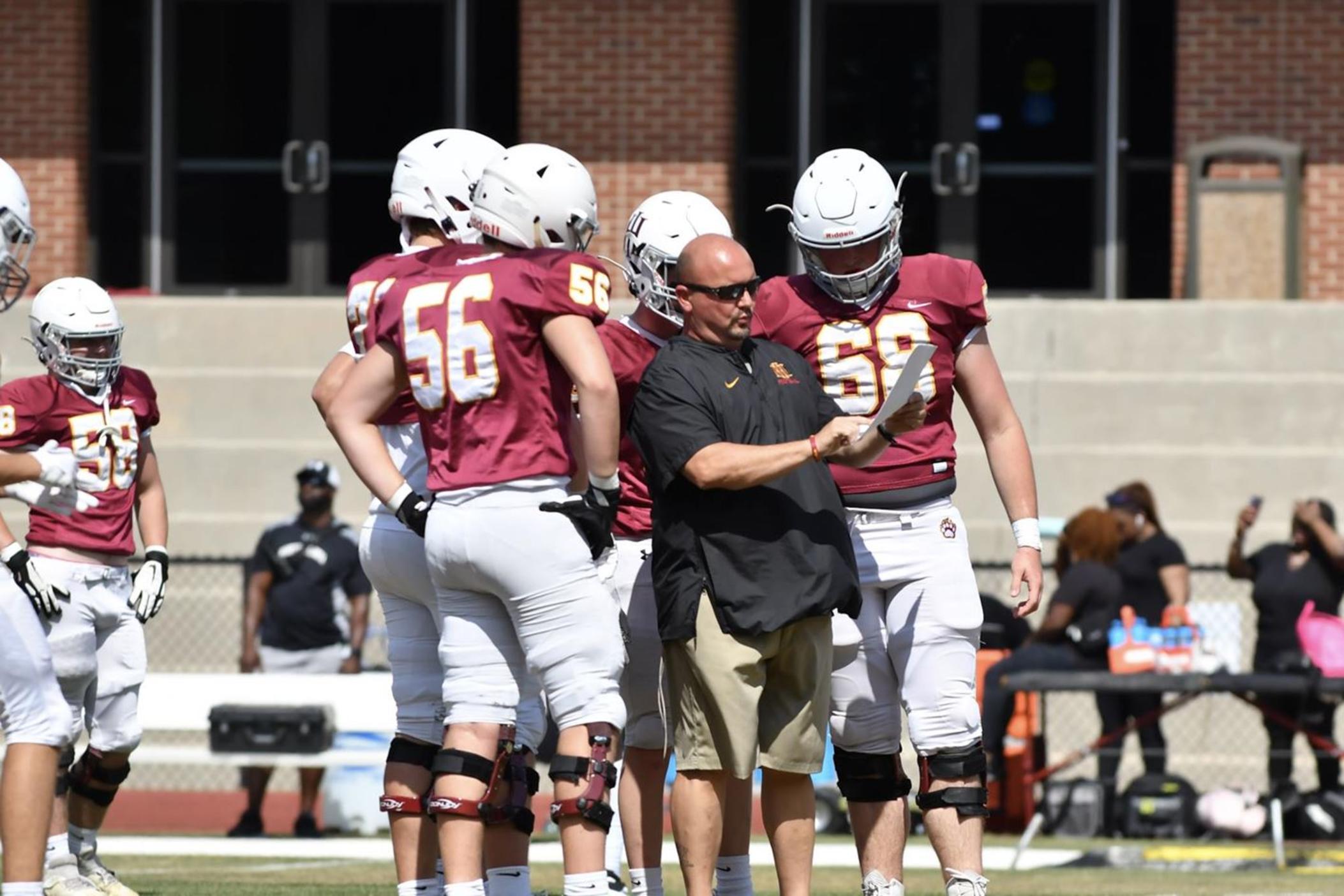 When the GHSA came out with their latest round of who-goes-where, those of us here at GPB Sports decided to gather as much of a cross-section as possible in telling all the different versions of how schools were affected by the news of their new homes for the next two years.

You can catch the Football Fridays in Georgia podcast with Hannah Goodin and myself to hear from Trinity Christian Head Football Coach Kenny Dallas, Bremen Head Coach and AD Davis Russell, Richmond Hill Head Coach Matt LeZotte, and the GHSA Reclassification Committee Chair Dr. Curt Miller on how everyone eventually came out the other side.

But those aren’t the only stories and viewpoints...

We heard about similar situations in more locations from coaches that have had to grapple with the reclassification process.

First stop: Holy Innocents and their head coach Tony Watkins... their end result mirrors Trinity Christian. In the end, they jumped all the way up to Quad-A...

“Most of our coaches were 100% fine with making the jump. We have had many conversations with our families as well, and after we educate them on the decision, they are in agreement with the move. One of the reasons we decided to make the move was due to travel. Our new region will be comprised of all metro-Atlanta schools.

We also wanted to be in the same division as some of the other local independent schools (Pace, Lovett, Westminster).”

The conversations that other schools and coaches were having during the debate were out of earshot of Holy Innocents. Frankly, they kept it that way on purpose and didn't know what everyone else was thinking.

“I can’t speak for other schools,” Watkins says. “We are just blessed to have great families, student-athletes, and coaches at HIES, and to be perfectly honest, we at HIES were all tired of talking about reclassification. We are going to get out there and compete the best that we can and keep it moving."

“We are excited about our new region. There are some great schools with a lot of athletic tradition: Clarkston, Druid Hills, Hapeville Charter, Miller Grove, Southwest Dekalb, Stephenson, Stone Mountain, and Westminster.”

There are the challenges immediately thereafter with filling in the schedule gaps- some are larger than others. But Coach Watkins looks to have settled in fairly well.

“We had to fill a few games for football. We are excited to get the rivalry going with Pace again. We do have to travel out of state for a couple of games, but we believe that getting those games will be a good experience for our kids.”

And with that travel... and it sounds like a LOT of travel to places like Christ Church Episcopal in South Carolina and a two-hour drive to Finley Stadium in Chattanooga for a game with Ensworth. I asked Coach Watkins about the school’s specific challenges. He’s ready to take them head-on...

“Athletically, we have many of the same challenges as everyone else. At the end of the day, we want to create the best experience possible for our student-athletes and our families. Whether we are in Class A, AAA, or AAAA, that will always be the mission.”

With Matt LeZotte, I wanted to circle back on the after-effects of reclassification. He’s in a tough spot, albeit one he and Richmond Hill are looking forward to in the next two seasons. Remember, he’s now in Region 1-7A. His travel takes them to Valdosta- twice this year (for 300 miles one-way total) and, eventually Moultrie to play Colquitt (180 miles to Mack Tharpe Stadium).

“I think that the conversations have always been positive, I think,” he says. “I think when talking with ball coaches, we're extremely competitive on Friday nights and especially the week in which we play one another. There’s that extra ‘want’ to win. We want to go get it. But the other 51 weeks out of the year, I've built some very good relationships with, with guys and, you know, it's been extremely supportive in the same way that I've been supportive of things that they've wanted to do.

“And, there are a lot of guys in this profession that I look up to, and, and I think it's just going to be a unique learning experience for everybody. And I'm looking forward to it. I'm just a guy that's been trying to win some ballgames at a program that has never really won them. We've come and done some exciting things. This is that next new, exciting phase of this program that we're going to take our school system on. We're going to take them on this journey and show them what it's supposed to look like because they've never seen it before. So, it's an exciting time to be a Wildcat right now.”

Much like the conversation we had with Coach Russell, another city school with a unique footprint is in Vidalia. In talking to VHS Athletic Director Tommy Dalley, it was an uphill battle all the way through the process.

“Vidalia High School is located inside Toombs County and TCHS is eight miles from us,” Dalley lays out. “But, if you walk out the back door of our gym, you’re in Montgomery County. Montgomery County High is 13 miles in the opposite direction. If you live behind the school, you’re assigned to MCHS even if you’re closer to VHS with that border there.

“As a city, we can’t grow unless you do something like expand our city limits. We’re strapped for growth with Double-A numbers and 750 kids. Our goal as a school system is to position ourselves to be as successful as possible. But when you have 74 or 75 kids out-of-zone, that makes it really tough when you multiply that by three- and not all of them are athletes. That was the case we made to the GHSA at the time.”

Dalley says that over half of the students at Vidalia have been there since their elementary school days in addition to those who are teacher’s kids on the rolls. Their new region is a lot of their old region, though, with the like of Toombs, Pierce, Appling, Tattnall, and Windsor Forest.

“The process during reclassification is always contentious and competitive. But you want to jockey and put your school in the best possible position to chase titles and have the opportunity to do that. We filtered calls both ways when folks would reach out to us, but it has always been that way.”

Dalley admits that he doesn’t see the end result as all that burdensome financially for his supporters and fans. The support has always been really good in the area. The travel won’t be as bad as someone like Richmond Hill’s, say, but there are concessions made in other areas. Offsetting those difficulties with non-region schedules is a large part of that.

Now, that we’re a month away from the first big moments of the new reclassification cycle, I wanted to revisit the conversation we had with Dr. Miller over the whole process and where things stand.

“You know, I'll be honest once it ended, fortunately or unfortunately on January 10th, when this was all ratified I was in Indianapolis watching the Georgia Bulldogs win a national championship. But, you know, that day Classes 2A through 7A were unanimously approved 66-0 and Class A Division One was passed 64 to 2. And in Class A, D2 was passed 65 to 1. So, I think from the just from that vote alone, I didn't hear much about it. I think everybody was pleased with what's going on, because it's hard to argue with when every school has the same rules.

“Now we have some things we have to look at, do we have certain schools with a lot of out of district students due to the location of the actual school building versus do we have some schools that had some out of district kids...? But the location that they're building is right in the population of where those kids live. There's always going to be something that we look at. We're always striving to get better and have a better process. But, when you look at it from high up and you try to just look at the state as a whole, I really think we did a good job of trying to zone in on creating a good competitive balance throughout the state.”

With every new reclassification cycle, there will always be things we learn about and things we learn from in the process. What will competitive balance be with new schools in new places? How will the multiplier fit in the overall? Who gets affected more than most- especially with the city and private schools with the largest multiplier in the country? And how will all those traditional names we see chasing championships- regardless of sport- adapt to the new normal?

As the answers begin to take form and we’ll be right there to tell how it all shakes out...