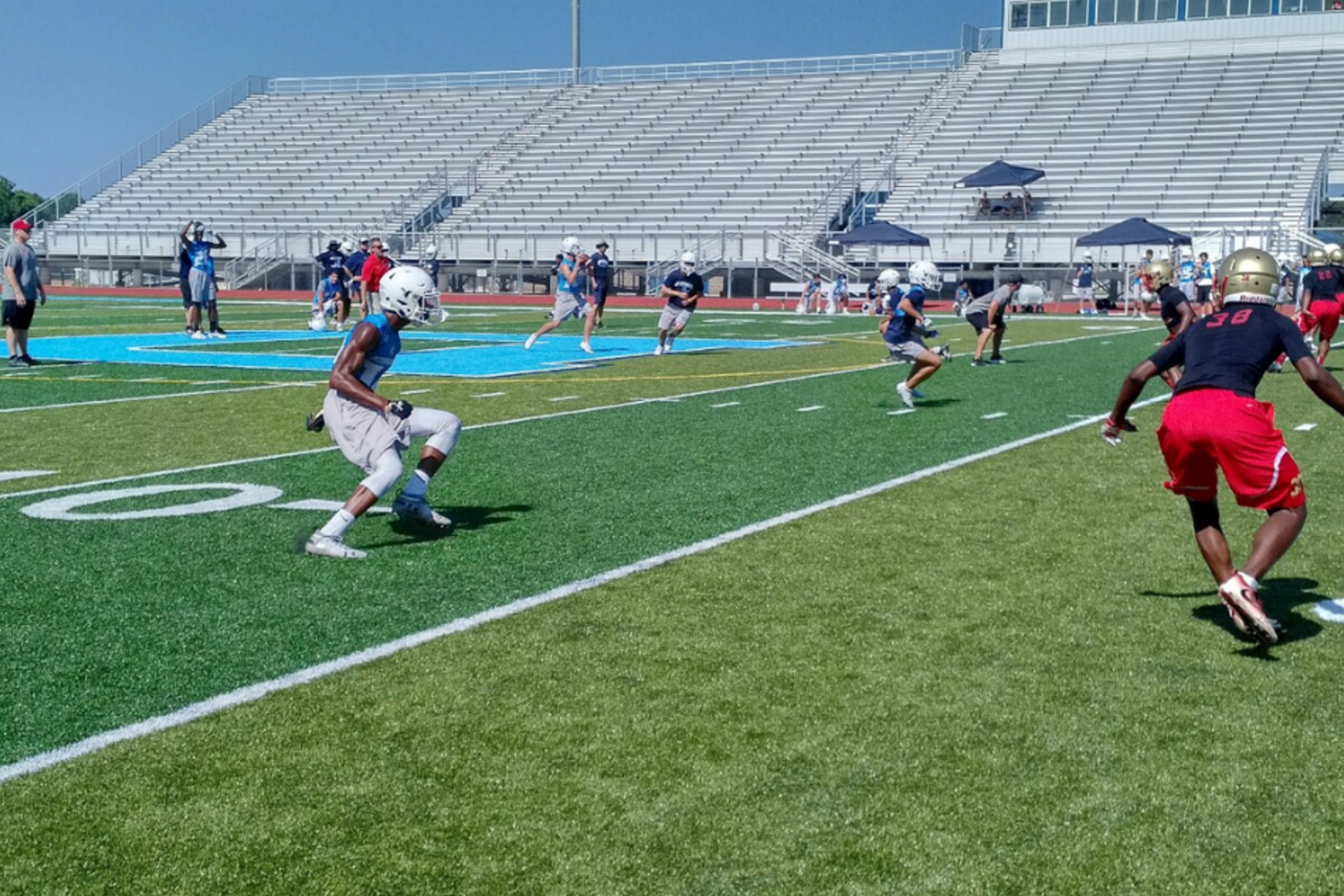 Spring Football (capitalization intentional) is one of the four seasons here in the state- the second one that I use... Football, Spring Football, 'cruitin', and National Signing Day... And it can come at you in a couple of different ways... it can come in front of a big crowd, on an atypical day of the week, or in front of an audience of a few. The impact can be had in what you look for and the chase of finding that piece of information.

For Chad Cheatham and the Fannin County Rebels it was one that was, on purpose, one that was self-contained.

"It was good for us," Cheatham says. "We don't normally do it. But we're so... young..."
And you can tell just how young Fannin County's roster is when Cheatham takes his time with those last two words..."so... young..."

There are 16 Freshmen and 14 Sophomores that are a part of the equation. And those 30 students needed that time to learn before 7x7's and padded camps that are coming up in the calendar.

"We wanted to have them develop a little understanding before they get thrown into the fire. We'll play 45 to 60 this season and some of them will be those sophomores and freshmen. We went in shells for four days, so we were focused on installing and evaluating everything. We filmed it all and we'll look at everything that happened," said Cheatham.

"We know what the Juniors and Seniors can do and they can adapt to pressure quickly. We'll evaluate our leadership with the older guys and we'll pace ourselves this year like that."

And they'll get to do it in what Cheatham calls the "SEC of AA."

Region 7 has Haralson County, Murray County, North Murray, Model, Rockmart, and Gordon Central squaring off against the Rebels for this cycle. With a young team, it might be difficult out of the blocks but it should pay dividends when they're a little bit older.

Then, it could be your first time as a head coach...

That's what Jonathan DeLay is facing as the new head coach at Thomasville with the Bulldogs. After Zach Grage left to head to Lowndes, the job with the tremendous pedigree and history was available. And for someone who has seen all the work it entails for a handful of seasons and has a father-in-law that worked the same sideline two decades ago (Tommy Welch from 2000-2004, by the way), Coach DeLay knows the gravity and importance of being the "Thomasville Bulldogs Head Coach."

"It's one of those traditions in all of high school football," he tells me. "When you watch college football, and I'm a Georgia fan, you like the uniforms of teams like Penn State, Alabama, and Georgia. You know what Thomasville High School is going to wear on a home date at Veterans Memorial Stadium. You know what Thomasville is going to wear on the road. It's a tradition that's unmatched."

DeLay was at Disney World for Spring Break ready to be the Offensive Coordinator for 2022. Then Zach Grage told him he was leaving and DeLay thought "maybe, it's my time."

"It sunk in at the presser," he says. "When they announced my name in front of parents, in-laws, and players I was thinking, 'Man, this is real.' It's an emotional time and I'm getting to do something I love to do."

The best moment for him is when he gets to go out onto the field and be there with his players at practice. All that time making schedules and scripts is translated into a rewarding time on the field.  "It's a chance to show we all love each other, compete against each other, and experience winning as a group."

The Bulldogs got to run a Spring ball calendar for two weeks that ended in the "Red and Gold Scrimmage" - a 16-14 final that was decided on the last drive. "Winning is SO important to these kids," Coach DeLay says, "and the losing team got so mad. They're all super competitors and learn when they win. You learn to keep a lead from a game like the scrimmage and we also found a lot of guys that could play other positions- whether it's offensive guys that can play defense or defensive guys that can play offense. "It's about putting the best eleven out there in the right situation and focusing on the fundamentals."

Approach Number Three is more of a "Welcome Back..."

Sean Calhoun is the new head coach at Colquitt County after a year in Alabama, five at Carrollton before that, and a two-year stint as Packers OC in 2014 and 2015. When you call Calhoun, there's a voice mail that he has kept for almost a decade that's on his cell. It's his, now, 11-year-old Cade when he was 2.

"I don't know if I'll ever get rid of it," he admits. Nor should he, frankly... Calhoun and his wife Kellie have three children, son Cade, 11; daughter Cora Mae, 10; and daughter Cambry Jo, 7.

They've been back for a few months now.

"Colquitt is one of THOSE jobs in Georgia or the United States, really, when they call you- you listen," Calhoun admits. "Having been here previously helps where you know the landscape and potential of the program, football and family-wise. We were embraced in Alabama and I had replaced a coach who had been at Vestavia Hills for 43 years. But coming back here, you also are aware of the resources and the community. It's the best competition in the state, if not in the country, and it checked all the boxes."

Ever since he took over, it has been busy... but a "fun busy." When you're an assistant, you have a different lens that you're looking through in the day-to-day. As Calhoun says, "you don't know what you don't know" and he has had to learn the landscape in south Georgia.

"Your philosophy and your core as to who you are stay the same," he says. "But each community is different and you have to embrace it to thrive as a coach. We have been able to rekindle some old relationships since we came back, but the new relationships we have been making have been great."

Believe it or not, this past week was Calhoun's first-ever spring game and it was going to be interesting to see how the whole experience would play out in their game at Cairo. Eventually, the Packers came back to win the game after trailing at the half. The starters played only the first three quarters, so it was a different vibe across the board.

The 12-minute fourth quarter was turned over to the JV and the third quarter was only an 8-minute clock. The game did not feature live kickoffs, kickoff returns, punts or punt returns.

"It's exciting to be back out," Calhoun admits. "It's a different level of excitement when you're going against someone else and see how you go against their offense and defense. Obviously, you hope you get out of a scrimmage like this without any injuries. The chances are the same if you don't play a game like this, too."

"One of the cons to a scrimmage is you have to game plan and you have to take the time to do it. But we're excited for it. It's a legit full game day and you hope it goes well."

It's good to see how Spring Football (capitalization intentional) gives you the chance to learn in different ways. But it also gives you a chance to get names out there in ways we never thought...

As a bit of an "oh, by the way" this time around I came across something that I KNOW Matt and Rusty Mansell didn't let get past their desks... In Cartersville, this is a really cool way to get your athlete's information out for college recruiters. I saw this and thought it would be the beginning of the next wave of staying in contact 24-7-365...

This is absolute genius and when other schools see this, they'll hop on this idea to get word out...
I can't wait for the empirical evidence on this...
Play it safe, everyone... I'll talk to you soon...