An Act Of Courage, Determination And Support In Early County 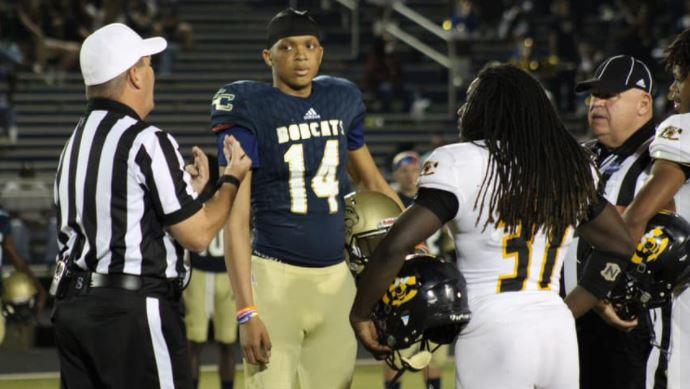 Early County senior Tyler Winns summoned enough strength to be there for the coin toss at the season-ending game.

Sometimes, our postgame show on Football Fridays in Georgia can open a window for you...

For me, as I was screaming through my twitter timeline at 100 mph, I came across a note from Early County AD Craig Storey

It was Senior Night in Blakely, and Tyler Winns did exactly that. Frankly, the whole Early County Bobcat community did. It would end up another heartbreaking loss at the end of the night as Cook came to town. But, for the first play of the game, it was a different story that had nothing to do with the end result on the scoreboard.

“Tyler promised his teammates he would come back and play,” Storey says. “I wasn’t sure he would be there. He had been watching games from his car here all season. But I looked at one point and he was in line with the rest of the seniors. He had dressed out for Senior Night.”

Early County Head Coach Joel Harvin first got to know Tyler as an eighth grader over at the middle school -- in a situation much like when I reached out -- during a weight training class.

“He was a tall, skinny kid then,” Harvin remembers. “And because of that, we all wondered if he would be a basketball player. He was one of the best kids around whether it was in the weight room or as a student.”

“He always cared about his grades,” DeWana Fields, Early County’s Mentor teacher for their REACH Scholars, says. “I’ve been with him since then as well. That moment showed you how strong he is as a young man. You saw his strength. You saw how motivated he is. And you saw his perseverance pay off. We were all excited for him. It gave me chill bumps to see it.”

When you’re in the REACH program, odds are you’re the first in your family to get the chance to go to college. Tyler made the point to go back and speak to the sixth graders that were new to the program themselves and let them know what the program meant to him and what it could mean to those new students sitting in the same seats he did before. Fields saw a quiet and shy sub-freshman as a silent warrior and she got to see a go-getter grow. 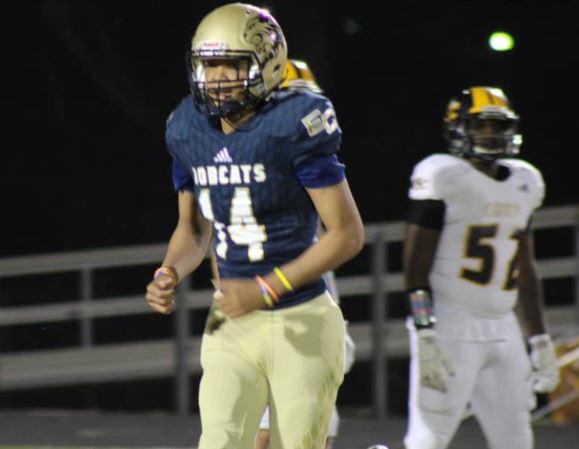 Tyler Winns jogs off the field after his emotional return at Early County,

But last year, in the game against Thomasville, Tyler was set to be a two-way player as a tight end and a defensive end. He came out after a few plays and the coaches thought his hamstring may have been strained. He was held out for a few more games and, when he was active a second time, he lasted only two plays.

“He got an X-Ray,” Harvin says, “and they didn’t find anything. So, we thought it might be a torn hamstring or something. Tyler did everything we asked to try and treat it and we held him out until the second round of the playoffs. He had been at practice, but he wasn’t active until the game. After one play, he came out again.” 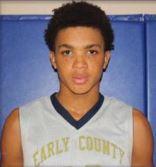 Early lost to Bleckley and Tyler went straight into basketball season. He practiced, had more problems, and was headed to another x-Ray. This time, the doctor noticed a mass on his leg...

“The diagnosis absolutely floors you,” Bobcats assistant offensive line coach Jay Palmer says. “When we knew of the initial diagnosis, you ask yourself, ‘Is this curable? Is it invasive? Is it fast-spreading?’ If it’s something curable and it can be whipped, Tyler will whip it. He’s a brave young man.”

The itinerary was immediate chemo and radiation to keep it from spreading.

“They were able to contain it,” he adds. “And to see him go through that... He stayed involved with everything here as best he could with COVID.”

And for a town that was dealing with another student’s passing after homecoming and a previous cancer diagnosis of a second young child in town, this moment wasn’t going to pass the Bobcats by. After Tyler and his family had fought through chemo and radiation with all the trips to Atlanta and back, the football team and ECHS fans met the family in the town square for a “Welcome Home” parade. It was a couple of times around the town square with a police and fire escort -- for another win.

“With all the shots and blood work he had to go through,” Fields says, “he has the strength of a lion. He is one brave fellow.” Each one of those words was accented to give the characterization a life of its own.

The community set up a GoFundMe to help with expenses. To no one’s surprise, the goals were passed pretty quickly. The Atlanta Falcons caught wind of Tyler and sent their support through sending some gear and stayed in touch.

The 2021 regular season for Early County football ends this week and the chance for Tyler to appear with his teammates came down to the game last Friday -- Senior Night.

“I approached him and his mom thinking, maybe, he could come in for one play or something like that,” Harvin admits. “At first, Tyler was reluctant to do it. But by Wednesday, we wanted to try and get him in for that one play. I called over to Cook head coach Jamie Rodgers to talk about it. He couldn’t have been more awesome about it. He said, ‘Great! No problem!’ We even worked it out to where, if he got the ball first, he would take a delay of game penalty.”

Tyler would be the only captain present for the coin toss, as Coach Storey’s picture shows us, and for Tyler to go out one last time on the Senior Night for him and his classmates meant a lot to everyone there. No, there weren’t a lot of dry eyes in the house. Nor should there have been, frankly.

Tyler Winns got to live a normal day as a Senior at Early County High in the middle of entirely too many abnormal days.

“It reminds you of what high school sports and athletics is all about,” Palmer says. “All of those emotions you get to experience from a coaching standpoint...? And to see him there...? That’s what it’s all about.”

END_OF_DOCUMENT_TOKEN_TO_BE_REPLACED

Top Football Performers From Third Round

Here are some of the top high school football performances that took place around Georgia from the quarterfinal round of the state playoffs.