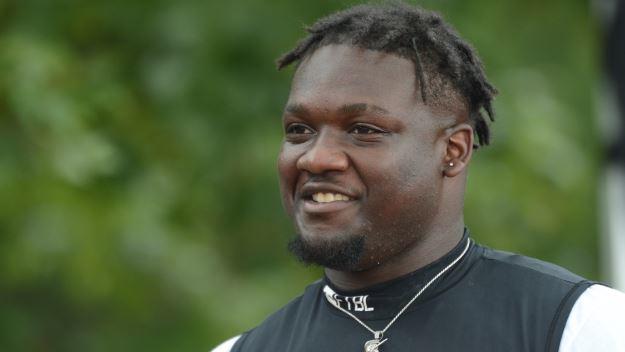 Tyre West is a starting defensive end for Tift County High School in Tifton. The 6-foot-3, 270-pound junior is the No. 8 prospect in the 2022 class and No. 1 overall player in the state in that class, according to the 247Sports Composite.

West said his recruiting process was “crazy” and that he was getting offers from everywhere, including Alabama, Florida, LSU, Tennessee and Oregon. Like many top athletes, it came down to where West felt most at home and ultimately that was with head coach Kirby Smart and the Georgia Bulldogs.

Find out more about West’s decision to sign with the Bulldogs and his hilarious favorite memory from Tift County in an interview with GPB’s Hannah Goodin.

West’s football season is now over, but he said it was amazing playing for the Blue Devils. He also said going against some of the top players in the nation every day helped prepare him for the next level.

Don’t miss more interviews just like this on the brand-new Recruiting 2020 television show that airs every Friday night at 7 p.m. on GPB! The Football Friday in Georgia Game of the Week will air immediately following at 7:30 p.m. If you missed the show you can watch it OnDemand at gpb.org/sports.