5A Teams Learn: Be-Ware Of The Gators 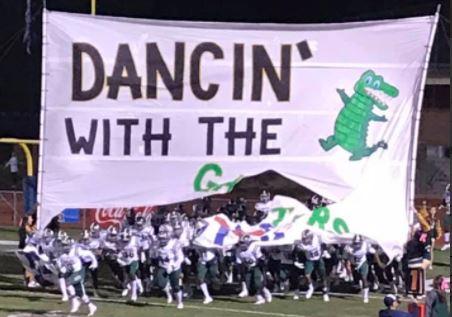 Coach Jason Strickland and the Ware County Gators are not afraid to schedule heavyweights in their non-region workload.

It gives Strickland the chance to see where they are as a football team heading into region play and, hopefully, a deep playoff run year-in and year-out. Last week, Benedictine and coach Danny Britt came to Waycross and, along those same lines, wanted to challenge themselves. In “one of those games,” Ware County quarterback Thomas Castellanos went 16-for-22 for 234 yards and two TDs while adding to his rushing touchdown totals along the way. When the night was over, Ware doubled up Benedictine 43-21.

The Gators are 5-0, top-ranked in some polls – including the GPB rankings -- for the first time in six seasons. They have beaten three ranked teams to get to this point. 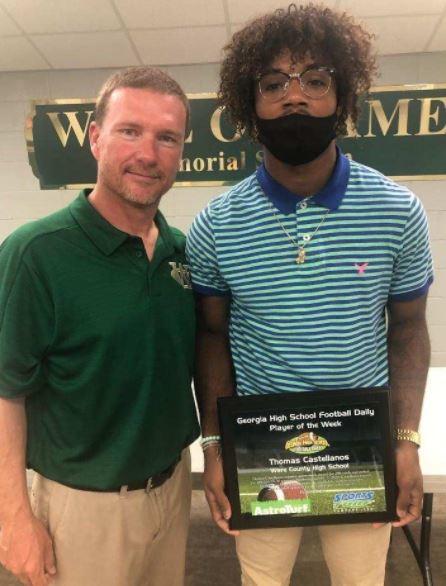 “We knew he was going to have to have a night like that for us to have a chance,” Strickland said. “Seems like Danny (Britt and Benedictine) has been a thorn of the side of a lot of teams. We’ve always matched up well with those guys. And with them, you know how well-coached they are and how disciplined they are.”

“What impressed me the most about Thomas, with all the information out there with these two QBs (Castellanos and Benedictine’s Holden Geriner), we just wanted him to try not to prove to be a Power 5 QB Friday night. We just wanted him to be the QB for the Ware County Gators. He went out and put on a heckuva performance.”

They’ve done that on the whole this year -- beating Cook, Richmond Hill, Thomson, Bainbridge and Benedictine. They have had to win a couple of close ones and Strickland thinks it’s a good early test of the character for the Gators. 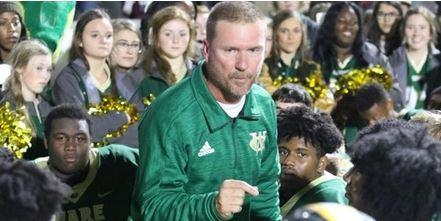 ‘With our non-region schedule, two games have gone down to the last play of the game,” he says. “We had a game where we played the worst we played in a half in two years, but we came out in second half and showed maturity and played really well. I think what we’ve seen is an honest evaluation about how to respond to adversity. It’s an honest evaluation of how the older guys are when they see things are going well. But there’s something else.”

“Seeing the older guys coach the younger guys the way they are is one of the most fulfilling things I’ve seen in my years as a coach. They do a phenomenal job. It’s been great to see them reach the maturity level they’re at right now.”

Strickland has a lot of confidence in his players and has admired their ability to adapt in this current uncertain times we’re living in. He sees them more seasoned and able to adapt to what’s going on around them, especially when each game is a test to stick to the same protocols that were successful the week before in order to continue to play each week in succession.

The Ware County week is not, like every other coach you know, set in pen.

The Ware County football team takes the field and gets ready to compete.

“It’s in pencil and I have a big eraser,” he says. “Honestly, it’s a mental drain. We were looking for a game this week. If the right situation had presented itself, we would have been open to it. But most of the staff sat around after the game last Friday- and, mentally, we were exhausted.  You want to keep playing and be in front of an unbelievable community like we have here in Ware County.”

“Who was it? Bill Belichick who said: This isn’t week-by-week or day-by-day. This is hour-by-hour. But our kids have handled it the best.”

Here’s the “Region of Doom” in Region 1-5A -- Ware, Coffee, Warner Robins, Veterans, and Wayne County. With that schedule coming up, I asked Coach Strickland where he thinks he is as a football team.

“I think we’re a really good football team, but I think we can be a great football team,” he says. “We have, like everybody else, things to clean up. I thought at the beginning of the season, there were certain areas of our game where we were further along where we could do a little bit more. I think we might have overloaded them last season instead of just doing the simple things. So, last week, we took out the clutter in their brain.

“When they go out and just play fast, they’re a pretty darn good football team.”

And they’ll get the week off before going up against an entire region of darn good football teams to get into the playoffs in 2020.

Play it safe, everyone… I’ll see you soon!