Proud Statesboro Program Gets Back On Track 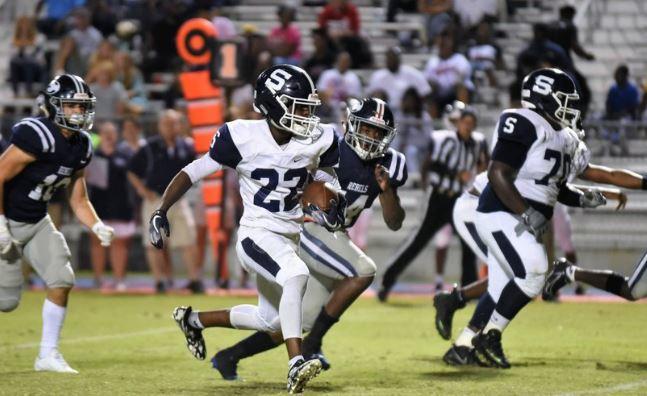 That 2013 season seems like an eternity ago for the Statesboro Blue Devil football fans. It has been six years since they have seen a winning football team at Womack Field. That edition of blue and white went 10-2, and advanced to the second round of the GHSA State Playoffs.

Former Blue Devil great Jeff Kaiser returned to his alma mater as head coach and went 2-7 in his initial year in 2017 and followed that with a 4-7, mark last year and a narrow loss to Griffin, 19-12, in the first round of the state playoffs.

There’s a new attitude in Blue Devil country this season as Kaiser has them unbeaten at 3-0. They beat Greenbrier 31-0 in their season opener and followed that win with a 29-19 win over 4-1 Veterans, and then last Friday night rolled past Class 6A Effingham County 35-0 in Springfield.

“It’s been fun this year,” Kaiser said. “We’ve changed a few things … shorter practices … and hard work have made a big difference in this team. I like where we are right now.”

The Blue Devils don’t have an easy schedule ahead. One-loss West Laurens comes to town this week and one-loss Burke County awaits before the region schedule kicks in.

“If we stay healthy we should be OK in our region,” Kaiser said. “Our offense is playing well and we’ve got four running backs that we spread the ball around to.” 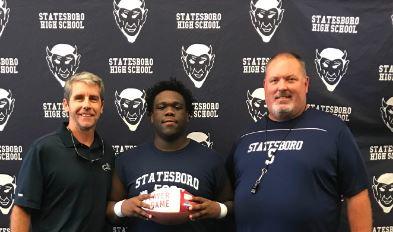 Xavier Lee was Statesboro Player of the Week against Veterans when he had seven solo tackles, one for loss, and two assists.

Kaiser is also proud of his defense.

“Right now our defensive line has been outstanding. We’ve not allowed over 200 yards rushing in any of our games so far. We are playing well right now over there on defense.”

The win over Veterans was an important one for Statesboro.

“Veterans is the best team we’ve beaten in several years here in Statesboro and it gave us a lot of confidence to come back from being down 19-7 in the fourth quarter,” Kaiser said. “We just did what we needed to do to win a very tough game.”

Last week the Blue devils rolled up over 460 yards on the ground in their shutout of Effingham County.

“We had a tough week of practice in preparation for Effingham,” said Kaiser. “We just wanted the kids stay focused on the game ahead and not look back at that great win over Veterans.”

The Region 2-5A schedule begins on Oct. 11t when Statesboro meets perennial power Wayne County in Jesup. On Oct. 18 it’s Ware County at Womack Field in Statesboro. After an open date, the Blue Devils travel to Rincon to meet surprising South Effingham, who is also unbeaten at 4-0. The regular season wraps up on Nov. 8 as region foe New Hampstead comes calling.

“I really feel that there is not a game on our remaining schedule that we don’t have a chance to win,” said Kaiser. “We are playing well right now and if we continue to improve we’ll be alright.”