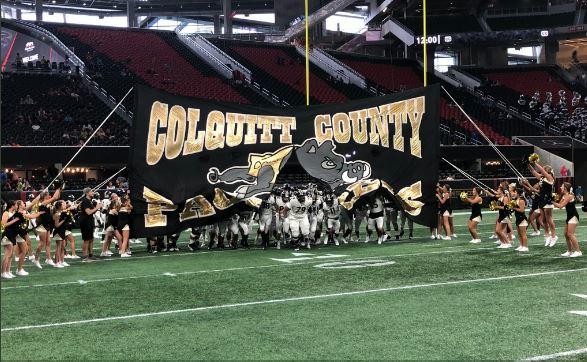 The first week of the Georgia High School Prep football season proved one thing; the highly-rated football teams in each classification in this state were not overrated. The preseason Top 10 Polls are generally considered to be a re-hash of last year’s season-ending poll, but those top 10 teams that opened the season last weekend, proved worthy of their rankings.

There were several prep football classics played last weekend, but for the first time in quite a few years, there was an almost full slate of regular-season games played.

The Corky Kell Classic got the season off to a roaring start on Thursday as Calhoun downed Ridgeland, 45-21 and top-ranked Rome, the Class 5A favorite outscored Class 7A Marietta 51-41.  In other games in that event, Colquitt County rolled past McEachern 41-7, to serve notice that they are a team to contend with in 7A, and North Gwinnett, the defending champions of Class 7A, rushed past Brookwood 37-2. Walton beat Mill Creek, 48-27, Milton topped Archer, 21-19, Norcross beat Mays and Kell held off East Coweta 36-34.

Colquitt County got 162 yards rushing from junior running back Daijun Edward on 25 carries to down McEachern. “I was impressed with the way we played for an opener,” said Rush Propst, head coach of the Packers from Moultrie. “In reality we should have played well … we are experienced. We were ready to put last year’s heart-breaking loss in the finals to North Gwinnett behind us and focus on 2018.”

The Packers unveiled a strong ground attack which featured senior Ty Leggett and juniors Markavian Spradley and Montravious Ponder who combined for 235 yards on the ground. All-state kicker Ryan Fitzgerald also had a good day at Mercedes-Benz, kicking a 51-yard and 53-yard field goal each time the offense stalled.

Milton celebrates its win at Mercedes-Benz

Propst said, “We came to play with our antennas up and I felt that we played with a sense of urgency. It’s too early to tell just how good we are, but we played well.” The Packers meet Trinity Catholic of Missouri this Saturday night in Moultrie.

Region 1 6A proved that it will be one of the toughest regions in the state as defending champion Lee County opened the season with a 47-6 win over Dougherty of Albany. Coffee topped Brunswick 20-7, Northside-Warner Robins rolled over Centennial 38-14 and Valdosta beat Jackson-Atlanta 45-27.

Without a doubt, one of the best football teams in any classification in state is Buford of Class 5A.  The Wolves downed Tucker, one of the top teams in Class 6A, 40-14 on Friday in Georgia State Stadium in the Kell event. In addition to Buford and Rome, there are several contenders in the 5A group of teams. Warner Robins, last year’s runner up to Rome, debuted their season with a 40-29 win over class 7A power Tift County to serve notice that they will be in the trophy hunt in December again this season.

In Class 4A, Blessed Trinity downed rival St. Pius X, 35-13. Cartersville tossed a shutout at Allatoona, 35-0 and Mary Persons looked like the top 10 team they are with an impressive win over Gainesville, 42-0. In Class 3A Cedar Grove downed Summerville, a South Carolina power, 21-7, Greater Atlanta Christian edged Lovett 24-21, and new 3A member Benedictine Military held off Class 4A Burke County 23-22 in the Erk Russell Classic at Georgia Southern University. In the other games at Paulson Stadium in the Russell event, GISA member teams Bulloch Academy and Pinewood Christian met in the opener Saturday morning with Bulloch capturing at 42-8 win, and Bremen downed Rabun County 13-10.

Eagles Landing Christian opened their title defense in Class A Private with a 41-0 win over Morrow. Highly ranked Athens Academy beat Savannah Christian Prep, 20-7 in a battle of Class A powers. In the Class A Public division, Clinch County beat Mount Hebron Academy, 24-17, and Irwin County ran past Berrien 41-7.

The 2018 season is off to a roaring start, and top-ranked teams are already proving their mettle in week one. The Grayson Rams, one of the state’s top-ranked 7A power kicks off its season this week with a game against Tucker. Other top games include Valdosta at Tift County, Mt. Zion Jonesboro at Starr’s Mill, Crisp County at West Laurens, and Peach County at Northside Warner Robins.